Sightseeing in Bandung - what to see. Complete travel guide 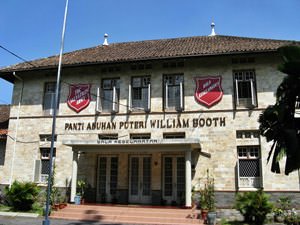 Bandung is one of the largest economic and cultural centers of Indonesia. The city attracts thousands of tourists by its unforgettable mix of western and European traditions. The city was founded in 1810; however, it looks more like a huge garden than like an architectural center.
Top places to stay in Bandung - most luxurious hotels
Savoy Homann Bidakara Hotel can be safely called the most famous and popular accommodation place in Bandung. It occupies a unique wave-shaped building that is an architectural landmark of …

Open
Many ancient buildings in Bandung are in good condition even these days, so they have been turned into museums. The city’s wide streets surrounded by perks and valley are great for pedestrian walks. While taking a walk on one of such valleys, you can see multiple cozy restaurants and trading centers, old museums and monuments.
Dago waterfall is an internationally famous sight of this city. Near the waterfall are created observation areas and a park. So called Jeans Street begins nearby the waterfall. Here are located largest textile mills and offices in Indonesia. The northern part of the city is considered the tourists zone and so largest and most famous hotels are concentrated there. Copyright www.orangesmile.com
Old hotels keeping the history of Bandung
Connoisseurs of classical traditions can choose one of the wonderful old villas in Bandung. An attractive hotel Paras Yogya is located in a renovated villa resembling an amazing museum. In …

Open
The resort will perfectly fit travelers, who enjoy nightlife. When darkness falls to Bandung, tenths of night bars and discos lure visitors by their bright signs. The most famous are “Northern Sea” club, “Braga” bar, and “Caesar Palace” discotheque. Beach rest fans should consider visiting Anyer beach, where they can rent a boat and take a ride to magnificent cays and rocky arches. The resort is also a great choice for theater connoisseurs. Hotels in Bandung regularly organize various performances with breathtaking dances. By the way, tourists can also participate in these activities. Finally, if noisy urban life is not something you seek in Bandung, then take an excursion to the National Park or make a ride to tropics. 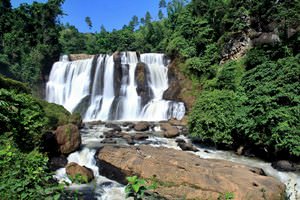 In the immediate vicinity of the city there are many interesting natural attractions, including Mount Tangkuban. Everyday excursions to this volcano are organised, which are popular not only among the visitors, but among locals too. Around the volcano are located beautiful forests and some beautiful lakes; here lay a lot of interesting tourist routes. An important attraction of this area are the hot sulphur pools, which are very useful for the organism when near. Around all of the pools comfortable seating stones are placed, and there is especially lot of visitors here at the weekend.
Best hotel choice for romantic escape, wedding or honeymoon in Bandung
Travelers who visit Bandung in search of romance and seclusion increasingly prefer Sensa Hotel. Everyone could pick a room for a romantic vacation here; rooms with panoramic windows and …

Open
Those fond of taking walks in the woods, should visit the Maribayya forest. Its territory is full of very interesting walking routes, which length is more than 5 km. It starts in the vicinity of Lembang and leads to Dago waterfall. On the way you can see many rare plants, as well as typical inhabitants of the local forests. Usually the walk lasts a few hours, so it is better to dedicate the entire day. 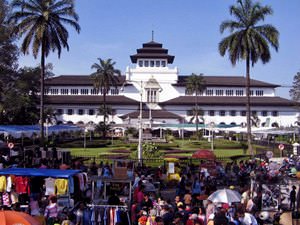 Directly in the city there is also a number of important excursion sites, including the beautiful Mosque Bandung Grand Mosque. The mosque is surrounded by a vast park with a beautiful green lawn, where you can lie down; this park is very popular amongst families with children. The mosque will be interesting to enjoy not only during the day but in the evening too, when it is decorated with spectacular lighting.
Shopping in Bandung - main shopping streets, outlets and boutiques
Bandung has many shops you can dream of. Frugal tourists mostly prefer Rumah Mode Factory outlet. It is located not far from the city center and offers a huge choice of clothes and shoes of …

Open
From an architectural point of view St Peter's Cathedral is very interesting, it is in the heart of the city. This old snow-white cathedral is of beautiful design, and has preserved the old stained glass windows, as well as sculptures and a number of architectural elements. 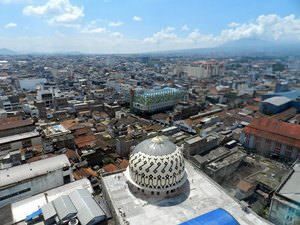 Bandung features a fascinating geological museum, which will interest the whole family. In it is a unique collection of exhibits, including skeletons of prehistoric animals, ancient fossils, as well as the skull and artefacts from prehistoric people. The museum houses a very interesting collection of minerals that have been discovered in places of volcanic eruptions. Despite the fact that the geological museum does not impress with size, it’s an exhibit collection is very extensive and diverse.

This guide to iconic landmarks and sights of Bandung is protected by the copyright law. You can re-publish this content with mandatory attribution: direct and active hyperlink to www.orangesmile.com.
Bandung - guide chapters 1 2 3 4 5 6 7 8 9 10 11 12 13

Shopping streets in Bandung
♥   Shopping area ' Alun-Alun Bandung' Bandung, 0.7 km from the center. On the map

National and city parks around Bandung
♥   Nature Recreation Park 'Cimanggu' , 15.6 km from the center. On the map

♥   Nature Recreation Park 'Gunung Tangkuban Parahu' , 17.6 km from the center. On the map

Sights around Bandung from our guide 'Extreme places on Earth' 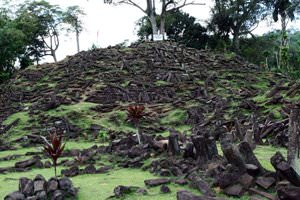 Distance from Bandung center - 60.9 km.
For the first time, Padangberg was explored around a century ago by scientists from Holland who 'discovered' within the mountain the anomalous geological formations. The inscriptions discovered on the pyramidal walls, some of which can not be unraveled, have gained even more interest. The ongoing research of the pyramid Gunung-Padang has lasted for more than a century. However, it has not yet been possible to guess the secret of its origin. In this case, the claims of the researchers who believe in the extraterrestrial origin of the pyramid seem to be mostly realistic. … Read further

Search touristic sites on the map of Bandung

Sightseeing in regions nearby Bandung

Jakarta
Jakarta is famous for large choice of wonderful places, entertaining and cultural facilities. Many travellers visit Jakarta only when transferring from one destination to another, but this wonderful city deserves much more attention. From historical point of view tourists are advised to visit Batavia district that was founded by the Dutch people in the 19th century. Many ... Open »
Semarang
The old part of the city attracts visitors by its Dutch architecture that is cherished and appreciated by the local residents. Beautiful Arab and Chinese quarters are also kept in great condition. Among the major monuments of the Chinese culture present in Semarang is Sam Po Kong Temple. Other attractions that traditionally attract tourists are the old Protestant church named ... Open »
Java
The island of Java is more than a thousand kilometers long; it is the most populous island in the Indonesian archipelago and a famous tourist destination. Almost a third of its territory is occupied by virgin tropical forests; there are 120 volcanoes on the island, 30 of which are active. Those wishing to explore the history and culture of Indonesia won’t find a more suitable ... Open »
Surabaya
Mesjid Ampel Mosque is surely the main religious attraction of this place. This mosque was built in the 15th century. There is a spacious observation deck near the building. It offers magnificent views of the city. It is always worth making a tour to Kalimas Old Port, where you can see wooden models of ships, which were built six centuries ago. Besides this restaurants and ... Open »
Bali
Inexpensive service is one of the biggest advantages of Bali, however, low price here comes with highest quality. You will be truly amazed by prices in many restaurants and chains of shops. Wild nature fans will have an opportunity to walk on spacious tropical gardens, see rice plantations, volcanoes and untouched jungles. If you prefer visiting historical sights, then you ... Open »
Kuta
A new hotel opened in Kuta only in the mid-20th century. Its name was Kuta Beach. For long twelve years, this hotel was the only accommodation available for foreign tourists. The popularity of the hippie movement was like a breath of fresh air for the resort. When looking for a job in Asia, hippies reached a strange place where hotels didn’t have any electric lighting until ... Open »

All about Bandung, Indonesia - sightseeings, attractions, touristic spots, architecture, history, culture and cuisine. Prepare your trip together with OrangeSmile.com - find out the 'must see' things in Bandung, which places to visit, which excursions to take, where the breathtaking views are waiting for you. Planning your trip with this travel guide will help your to get the most out of Bandung in few days.