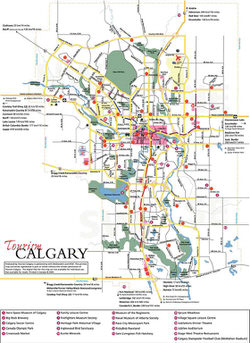 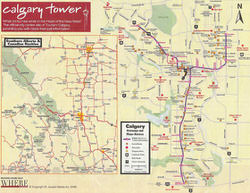 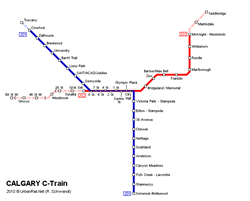 Interactive maps of hiking and biking routes around Calgary

1. You can zoom in/out using your mouse wheel, as well as move the map of Calgary with your mouse.
2. This interactive map presents two modes: 'Biking Routes' and 'Hiking Routes'. Use the '+' button on the map to switch between them.

This Calgary map has two modes: 'Railway Network' and 'Landscape & Rural Map'. Use the '+' button on the map to navigate.

Our guide to Calgary

Festivals and events in Calgary

In the middle of August, Calgary hosts Taste of Calgary, a famous gastronomic event. This is one more excellent opportunity for tourists to try different cuisines of the world. As a rule, the festival takes place in Eau Claire Festival Plaza, which is located not far from Prince's Island Park. At the end of July, the city hosts an event that appeals to all fans of quality theatrical events, namely, Summerstock … Open

Shaganappi Point Golf Course and Heritage Pointe Golf Course are the most popular golf clubs in the region. It is always pleasant to visit these clubs not only because of quality golf courses but also because of picturesque landscapes that are easy to admire for hours. Gamblers will be super pleased with local casinos, with Grey Eagle Casino and Cowboys Casino being the most popular ones. Here visitors can play … Open

9. Power supply voltage is 110V. The local hotels are equipped with standard American type wall sockets. Therefore, work of some electrical appliances is possible only with special adapters and connectors, so tourists are recommended to check their appliances for compatibility in advance. 8. The city is very clean and tidy. Throwing garbage is allowed in specially installed boxes and containers … Open

A peculiar symbol of Calgary is the pedestrian street of Stephen Avenue which is located in the heart of the city. On this street, you can see a lot of beautiful historic buildings and preserved houses, which in the early 20th century were built of sandstone. At the moment, in these historical buildings are well-known restaurants and hotels, as well as shops and other entertainment establishments. In Calgary, … Open