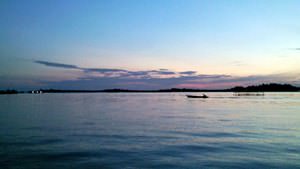 Indonesians are quite a contradictory nation. On Batam Island, you could either be surrounded by friendly people who are always ready to help, or you could collide with an aggressive youth who would bawl out «bule!» (meaning «foreigner» on the local language) right to your back. By the way, you can manage not to be ever called «bule» and you don’t even need to get citizenship or to spend a long time on the island. Just learn at least a basic level of the local language and then the locals will take you for one of them. However, it’s not that the local people are biased toward the foreigners. They just perceive tourists like guests whose money they can likely get.
Top hotels in Batam Island for business trip or short vacation
The first hotels on the island of Batam started appearing quite recently, less than 30 years ago. All hotel complexes feature first-class equipment, including some of the elite accommodation …

Open
Nevertheless, the locals might like to become friends with you and even offer you to perform the ritual clothes exchange – that gesture can be accepted as a fellow one. But if you’re not ready to give your shirt away to a stranger, then you can give something less valuable: a cap or a thread bracelet. The Batana inhabitants, like all Indonesians, have quite a peculiar attitude to friendship or any other partnership. The thing is that it’s believed among people from many other countries that fellows or partners are doing everything together to reach their certain goal. Here it’s vice verse: even though people could have a common goal, still they’d like to get their own profit.
That is why situations like the following one are quite common among the locals: as long as friendship is profitable for both people, then there are no troubles; but as one of them is not more useful for the other one, then the friendship is over. Moreover, if they understand some time later that there is yet a profit, they can simply become friends again. The locals don’t consider such relationships to be disgraceful or wrong. In addition, as you get I touch with Indonesians, remember, that it’s not accepted here to say «no» and Batam Island is not an exception. So, frequently you can hear «besok» (meaning «tomorrow») instead of direct rejection in response. But you’ll hear this phrase the next day, and the day after, and the day after the day and so on until everybody just pretends as there was no request at all. So, if you want to make an arrangement with a local, then you have to negotiate the exact date. Copyright www.orangesmile.com
Shopping in Batam Island - main shopping streets, outlets and boutiques
Batam Island, just like some other local islands, is a part of the free trade zone. Here you can find a great variety of goods by the world leading producers and for a very good price. …

Open
The locals here on the island will gladly talk with you, share a cigarette, beg for some money, and ask about a homeland. The island’s inhabitants are pretty curious and can freely meet any person they got interested in. People here have a very light attitude to the world – they even used not to lock their doors at all. However, in spite of all these facts, it’s considered to be improperly to elevate the voice as well as to cross your legs in public. It’s also extremely rude to point a finger at somebody. If you came here with your partner, then you have to remember that the locals strongly believe that lovers must show their feelings to each other only in private. 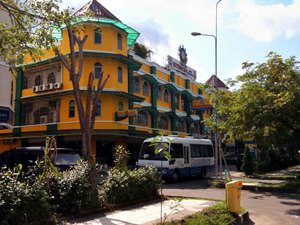 Most of the locals belong to the Muslim denomination. About 90% of the islanders go to mosques on regular basis. Moreover, there are lots of superstitions in society. For instance, it’s utterly indecent to take or give something with your left – «dirty» – hand, as they clean themselves precisely with the left one. It’s also forbidden to touch somebody’s head (even if you didn’t mean to) as it’s the sacred part of the body and the tenement of the soul. It’s also not a place for nudists or those who prefer topless sunbathing – it’s a breach of the peace. Considering clothes, women have to wear covered clothes here. Otherwise, they’re likely to attract undue attention of men.
Guide to Batam Island sightseeing - things to see and to visit
Batam is close to Singapore; it’s difficult to imagine, but just 30 years ago there had been only a small fishing village on its territory. In 1989 Batam has become a free trade zone …

Open
Don’t be surprised that there are no knives given in the local restaurants. Here they’re used only for cooking. People on Batama Island really like having fun. The locals celebrate the Muslim holidays as well as many others: New Year, Independence Day, The Youth Pledge, The Day of Heroes, Christmas Day, etc. Various music festivals and the Harvest festival also take place here, but the most vivid one is the Indonesian International Culture Festival. The costume show is the centre of the holiday. What is more, during the festival you can hear national songs all over the streets.

This guide to traditions and festivals in Batam Island is protected by the copyright law. You can re-publish this content with mandatory attribution: direct and active hyperlink to www.orangesmile.com.
Batam Island - guide chapters 1 2 3 4 5 6 7 8 9

Cathedrals and basilicas near Batam Island
♥   Cathedral of the Good Shepherd, Singapore, 22.6 km from the center. On the map

♥   Cathedral of the Sacred Heart of Jesus, Johor Bahru, 44.4 km from the center. On the map

Unique landmarks in Batam Island and around 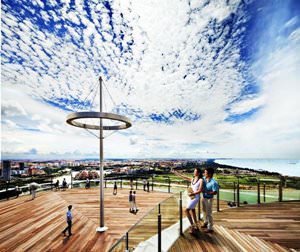 Distance from Batam Island center - 21.5 km.
A unique observation platform is often used for various special occasions, including weddings, so tourists have to specify its availability in advance. The observation deck is open not only for customers of a luxury hotel, but also for ordinary travelers. It’s just enough to buy a ticket. However, only guests can have swim in the pool, which is also quite unusual, and use bar services. … Read further 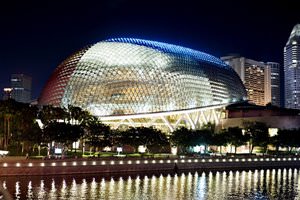 Distance from Batam Island center - 21.8 km.
Looking at the building from the bird's eye view, it reminds of Durian, the exotic fruit, which is also covered with small spines. The organizers of the project, however, had the other associations, they wanted to make the theater building similar to the large two-shell shell. The huge domes were made of glass, and in order to protect the theater from the hot weather, the special sun roofs were put on the domes, all of which recall the durian's barb. … Read further

Distance from Batam Island center - 21.9 km.
Certainly, after this symbolic event, one is splashing. The experienced tourists know, however, that the fountains of the fountain are switched off several times a day, which allows the free and 'dry' access to the center of the fountain. The fountain is part of the Suntec City trading center and was built in 1995 specifically to ensure prosperity and flourishing the center. … Read further

Colors of Batam Island in photos

Traditions and festivals in cities around Batam Island

Singapore City
The streets of the city are distinguished by amazing clarity. The locals are very concerned about order and encourage visitors to respect the local traditions. Rubbish should be disposed only into special boxes. The person who breaks this rule may also need to pay a large fine. One more peculiarity of the city is the restriction to take food in non-designated areas. This rule ... Open »
Johor Bahru
Johor Bahru is influenced by Chinese culture like no other city in Malaysia due to its very close proximity to Singapore. Therefore, if you get here during the Lunar New Year, you will be able to participate in the celebrations that take place on no less a scale than in the Middle Kingdom itself. The city is decorated in red on New Year’s Eve here. Scrolls with hieroglyphs ... Open »
Melaka
Locals certainly celebrate Deepavali, the Hindu New Year. Solemn religious ceremonies in honor of the next year are carried out within a month. Main symbol of Deepavali are oil lamps called wicca used to sanctify homes. It’s required to kindle lamps every day for an entire month, only in this case, you can reckon on success in the next year. A significant part of state's ... Open »
Kuala Lumpur
No less interesting is the origin of the Lantern Festival. According to an old legend, the fearsome dragon has decided to deprive the light from the people. Upon learning of his plans, residents have made a lot of lanterns and, when darkness came, moved with them to streets. Dragon wasn’t able to select which lantern to start with, and died of vexation. A good tradition to ... Open »
Sumatra
You have to be very quiet and calm in crowded places, the loud display of emotions is considered the first sign of bad manners. As for so many features of gestures, some of them are considered in distant countries, while on the island they are simply unacceptable. In any case don't finger anyone, as it is considered offensive. Locals believe head to be the sacred part of the ... Open »
Penang
It should be noted that bright paper lanterns have become one of the main ethnic symbols of Penang for local folks. These lanterns are used as house decorations in the season of numerous fests and holidays. The Deepavalli Day is dedicated to the lanterns being also known as a festival of lights. The holiday of lights is celebrated on the 7th of November. Literally the name of ... Open »

Cityguide on traditions, mentality and lifestyle of people in Batam Island. Learn the best periods to visit Batam Island to discover its soul - authentic festivals, events and celebrations. We will also reveal the interesting habits, attitude towards the world and to tourists in Batam Island.