Kuala Lumpur is a cosmopolitan city; its culture is interesting and many-sided. During the year, locals celebrate a lot of interesting festivals, which include both European and Muslim, Buddhist and Hindu celebrations. Among European holidays the most prominent are colorful New Year and Christian Easter. However, supporters of Muslim ignore those holidays; the most important event for them is celebration of Prophet Muhammad’s birthday. On this day Koran is read in all mosques. There are no noisy and colorful celebration activities. It is customary to celebrate it within family circle and spend the day in prayer.
Extraordinary weekend in Kuala Lumpur - unusual places, services and attractions for travel gourmet
…

Open
For travelers the most interesting are Buddhist holidays, which are real leaders in beauty and originality of events. An interesting event is the Moon Cake Festival; many interesting stories and legends are associated with it.
According to one of them, during the war with Mongols, locals passed secret messages to each other in cakes. Little notes were wrapped in dough; flatbreads served as reliable protection from prying eyes. Since then, every year locals bake smart round cakes, which are very similar to the full moon, and treat their loved ones. Copyright www.orangesmile.com
Shopping in Kuala Lumpur - main shopping streets, outlets and boutiques
Kuala Lumpur is famous for its cutting-edge shopping centers, and the largest one is Suria KLCC. This mall occupies the world-famous Petronas Twin Towers, more than 400 stores of world …

Open
No less interesting is the origin of the Lantern Festival. According to an old legend, the fearsome dragon has decided to deprive the light from the people. Upon learning of his plans, residents have made a lot of lanterns and, when darkness came, moved with them to streets. Dragon wasn’t able to select which lantern to start with, and died of vexation. A good tradition to make colorful lanterns has kept for many centuries. There are always solemn parades and entertainment in Kuala Lumpur in this festive day. It ends with a large-scale festival procession in which each participant has to pick the lantern with him. 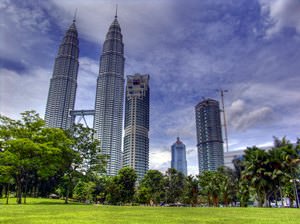 In September capital welcomes the Festival of Malaysia, which is considered the longest-running and most colorful holiday. It usually takes at least two weeks; residents from all the states of the country participate in the celebration. The festival includes a variety of events, from concerts and traditional children performances to the exciting culinary and sports competitions. No less interesting is the Flower festival, which usually takes place in July. For several days, the city turns into a huge fragrant garden.
Top touristic routes around Kuala Lumpur: architectural sightseeing and landmarks
Discovering the architecture of Kuala Lumpur from bird's eye view! Kuala Lumpur Tower, Stadium Negara, Railway Station, Aquaria KLCC, Maybank Tower, all those monuments are defining the image of Kuala Lumpur …

Open
The beginning of March in Kuala Lumpur is marked by another interesting event - the Hot Air Balloon Fiesta when the sky is painted in different colors, presenting a magnificent sight to all who are fortunate enough to see such beauty. At this time, the best teams from more than ten countries of the world demonstrate their skills in releasing balloons into the air. All this happens in the city center, in Desa ParkCity, thanks to which watching the colorful show can be combined with zorbing, indoor mountaineering, dancing, archery, racing, listening to music and tasting local food. You can see balloons of any kind - not only standard aircraft but also original ones - for example, themed on characters from Star Wars, Monster Corporations or Angry Birds. 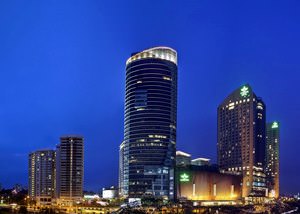 Good Vibes Festival is another great event that takes place in the vicinity of the Malaysian capital, in the town of Gohtong Jaya. This happens in early spring. The event is devoted to the music of different genres so here you can hear indie rock, electronic music or R'n'B. The festival gathers hundreds of performers and visitors from all over the world, there are always familiar names among its headliners. Given that the mountain town of Gohtong Jaya is incredibly picturesque, it is also a great opportunity to enjoy the beauty of Malaysian natural sights. Throughout July, a delightful aroma of fresh flowers hovers in Kuala Lumpur - the thing is that the Flora Fest is taking place at this time. You can visit it to enjoy photo exhibitions and workshops, as well as parades and floral design competitions.
Cultural vacation in Kuala Lumpur - fantastic architecture and monuments
Petronas Twin Towers, Sultan Abdul Samad Building, National Museum Kuala Lumpur, Bukit Jalil National Stadium, as well as many others, they all become the world's cultural heritage objects and remain as iconic monuments for Kuala Lumpur …

Open
Since the capital of Malaysia is visited by many tourists from China, and among the locals, there are many ethnic Chinese, two most important holidays - Chinese New Year and the Mid-Autumn Festival - are celebrated for them here. The first event usually falls on February and lasts for two days, during which Petaling Street in Chinatown changes miraculously: everywhere there are grandiose celebrations, houses are hung with paper cherry flowers and red lamps. The holiday is never complete without theatrical performances and colorful parades headed by the symbol of China - the dragon. Well, traditional “moon cakes” are baked specially for the Mid-Autumn Festival. All Chinese people prepare this bakery product at home at this time. Restaurants, hotels, and cafes keep up with them, preparing their own cakes with original flavors. 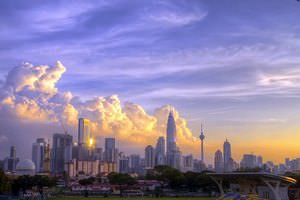 Kuala Lumpur is also home to many Indians for whom the main holiday is Thaipusam. It is usually held in February and can be a little incomprehensible for Europeans, but it still shows a multi-faceted Indian culture. The event is also known as the “Feast of Sacrifice” since hundreds of Indians carry the "Kavadis" with gifts for the god of war Murugan on their shoulders. Some believers pierce their face with knitting needles, set themselves on fire or hang on hooks. However, not a single drop of blood should appear on their bodies if they kept a fast properly before the holiday. The pilgrims' final destination is the Sri Mahamariamman Temple. In total, participants of the ceremony overcome fifteen kilometers.

This guide to traditions and festivals in Kuala Lumpur is protected by the copyright law. You can re-publish this content with mandatory attribution: direct and active hyperlink to www.orangesmile.com.
Kuala Lumpur - guide chapters 1 2 3 4 5 6 7 8 9 10 11

Cathedrals and basilicas near Kuala Lumpur
♥   Cathedral of St. John, Kuala Lumpur, 1.9 km from the center. On the map

All Malaysians are equal. But some of them have more rights than responsibilities. Malaysia is ethnically diverse. Belonging to a particular ethnic group has advantages and disadvantages. For example, freedom of religion is proclaimed in the country. But ethnic Malays do not have this freedom. Almost a third of the land in the country has the status of a reserve. These lands can only belong to indigenous people. Other ethnic groups that want to live in these areas must rent housing. This is due to the fact that they cannot own houses on the right of private property. … Open 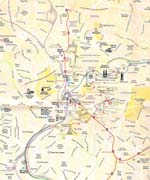 Colors of Kuala Lumpur in photos

Traditions and festivals in cities around Kuala Lumpur

Melaka
Locals certainly celebrate Deepavali, the Hindu New Year. Solemn religious ceremonies in honor of the next year are carried out within a month. Main symbol of Deepavali are oil lamps called wicca used to sanctify homes. It’s required to kindle lamps every day for an entire month, only in this case, you can reckon on success in the next year. A significant part of state's ... Open »
Penang
These rituals are the reason of banning of the festival in some oriental countries meanwhile in Penang and other regions of Malaysia the festival is still celebrated every year. The main holiday according to the Buddhist calendar is the Wesak Day. It is celebrated according to the lunar calendar that is why a date of its celebration varies each year. The custom of this day is ... Open »
Johor Bahru
The Johor Bahru Art Festival takes place in the city in September. If you will be able to choose the date of your trip here, be sure to try to get to this event. The festival of arts brings together almost all the local circus, theater, and film artists, artists, poets, and writers in the city. Everyone will find an event to his liking, from a graffiti masterclass or street ... Open »
Singapore City
The streets of the city are distinguished by amazing clarity. The locals are very concerned about order and encourage visitors to respect the local traditions. Rubbish should be disposed only into special boxes. The person who breaks this rule may also need to pay a large fine. One more peculiarity of the city is the restriction to take food in non-designated areas. This rule ... Open »
Langkawi
It is notable that the hibiscus is not a typical local plant. Today, no one can say certainly when and why it was imported into the territory of Langkawi. According to the most common version, Chinese traders were pioneers that brought a flower. They have brought flower seeds together with outlandish goods. The hibiscus found widespread use not only as a decorative plant, ... Open »
Sumatra
You have to be very quiet and calm in crowded places, the loud display of emotions is considered the first sign of bad manners. As for so many features of gestures, some of them are considered in distant countries, while on the island they are simply unacceptable. In any case don't finger anyone, as it is considered offensive. Locals believe head to be the sacred part of the ... Open »

Cityguide on traditions, mentality and lifestyle of people in Kuala Lumpur. Learn the best periods to visit Kuala Lumpur to discover its soul - authentic festivals, events and celebrations. We will also reveal the interesting habits, attitude towards the world and to tourists in Kuala Lumpur.