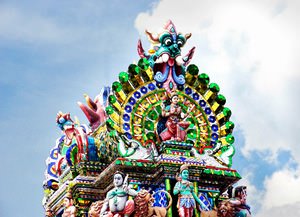 Several dozen different festivals and exhibitions are held in Johor Bahru every year. As a rule, they are quite small. The local Johor Society for Performing Arts organizes almost all of them. Therefore, it is not surprising that local events are associated with art. They attract locals, Singaporeans, and tourists from all over the world. For example, a rather interesting Johor Bahru Jazz Fest takes place in the city at the end of February. Recognized jazz stars perform on it. Local talented newcomers also take part in the festival. The festival is an opportunity to express themselves all over the country for them.
Your active city break in Johor Bahru. Attractions, recreation and entertainment - best places to spend your day and night here
In Bahru, absolutely everyone can easily find a suitable pastime – fans of outdoor activities, shopaholics, tourists with children, and amusement park devotees. For many locals and guests …

Open
If you prefer classical music, you should come to the city in July. The Johor Bahru Classical Music Festival takes place here on the very last weekend of the month. This is not only a time for performances by world-famous performers but also a platform for performances and masterclasses. It attracts listeners and aspiring musicians every year. The festival of writers, screenwriters, and directors takes place in the city in October. You can visit dozens of interesting productions and films during this festival. You will also have the opportunity to attend a masterclass of a famous writer or buy some of the new books at the fair.
The Johor Bahru Art Festival takes place in the city in September. If you will be able to choose the date of your trip here, be sure to try to get to this event. The festival of arts brings together almost all the local circus, theater, and film artists, artists, poets, and writers in the city. Everyone will find an event to his liking, from a graffiti masterclass or street art exhibition to classical music concerts. Copyright www.orangesmile.com
Top hotels in Johor Bahru for business trip or short vacation
The variety of attractive hotels in Bahru will please even the most discerning and experienced travelers. The stylish KSL Hotel & Resort is one of the most modern and popular places to stay …

Open
The Johor Bahru Art Festival is not only about street performers, additional screenings of art-house films in local cinemas, and exhibitions of paintings in a variety of genres on all central city streets. Tourists will be able to plunge into the culture of the indigenous inhabitants of Malaysia during the festival. A large part of the program includes performances by dancers in national costumes, musicians playing traditional instruments, as well as performances by local theater groups on historical themes. Several large-scale costume processions and even fashion week takes place during the festival. 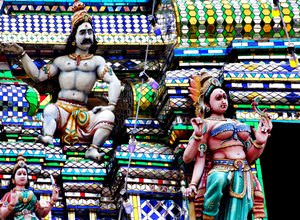 The festival of arts somehow affects all spheres of life in the city. Smaller events are more intimate. For example, the TFA Carnival takes place at the Temple of Fine Arts in early March. But this does not mean that visitors will be bored. In addition to the actual costume show, a real celebration of vegetarian cuisine, drinking, dancing, and a variety of games – both traditional and modern, will be held at TFA Carnival. If you like glamorous events, you should visit the fashion week in November. It is called Perspective. You can see outfits from leading Asian designers here.
Shopping in Johor Bahru - main shopping streets, outlets and boutiques
There is everything for fans of thoughtful shopping in Bahru. One of the most popular local shopping centers is located in the main city square near the railway station. The Johor-Singapore … 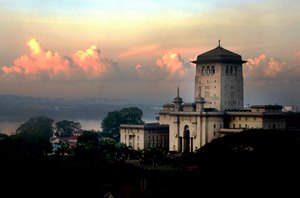 Johor Bahru is influenced by Chinese culture like no other city in Malaysia due to its very close proximity to Singapore. Therefore, if you get here during the Lunar New Year, you will be able to participate in the celebrations that take place on no less a scale than in the Middle Kingdom itself. The city is decorated in red on New Year’s Eve here. Scrolls with hieroglyphs appear everywhere here at this time. Half the city doesn't sleep on New Year’s Eve. The second half joins the first one the next day in mass celebrations.
Guide to Johor Bahru sightseeing - things to see and to visit
Bahru is a large industrial city in Malaysia, the capital of the state of Johor. This is also a dynamically developing center of tourism. In terms of the number of people, this city’s …

Open
Thousands of lanterns soar over Bahru in the night two weeks after the onset of a new lunar cycle. They see off the souls of their ancestors who came to the celebration. The most beautiful street festival Chingay will not leave any tourists indifferent. The basis of the holiday is a grand costume parade. It will stretch for fifteen kilometers. Jugglers, acrobats, princesses, knights, and even dragons will take to the streets of the city. Interestingly, even state institutions work half a day at this time. This is done so that everyone can enjoy the holiday.

This guide to traditions and festivals in Johor Bahru is protected by the copyright law. You can re-publish this content with mandatory attribution: direct and active hyperlink to www.orangesmile.com.
Johor Bahru - guide chapters 1 2 3 4 5 6 7 8

City tours, excursions and tickets in Johor Bahru and surroundings

Cathedrals and basilicas near Johor Bahru
♥   Cathedral of the Sacred Heart of Jesus, Johor Bahru, 3.2 km from the center. On the map

♥   Cathedral of the Good Shepherd, Singapore, 22 km from the center. On the map

Tamils make up the largest group of people of Indian origin in the state. They have both Indian and Lankan roots. They practice Hinduism. It includes both the main Hindu and Tamil Pantheon of deities. Sri Lankan Tamil Hindus are usually Shaivites. Tamils-Telugu mostly belong to the Vaishnava branch of Hinduism. It is worth noting that a minority of them profess Christianity and Islam. Most Indian Christians are Catholic, Anglican, Methodist, Lutheran or Evangelical in Malaysia. The Chinese are predominantly Buddhist in the region. But they turn to Confucianism and Taoism sometimes. … Open 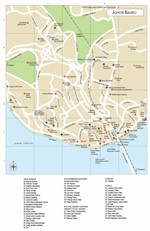 Colors of Johor Bahru in photos

Traditions and festivals in cities around Johor Bahru

Singapore City
The streets of the city are distinguished by amazing clarity. The locals are very concerned about order and encourage visitors to respect the local traditions. Rubbish should be disposed only into special boxes. The person who breaks this rule may also need to pay a large fine. One more peculiarity of the city is the restriction to take food in non-designated areas. This rule ... Open »
Batam Island
Nevertheless, the locals might like to become friends with you and even offer you to perform the ritual clothes exchange – that gesture can be accepted as a fellow one. But if you’re not ready to give your shirt away to a stranger, then you can give something less valuable: a cap or a thread bracelet. The Batana inhabitants, like all Indonesians, have quite a peculiar ... Open »
Melaka
A significant part of state's residents are Chinese; their annual celebrations are very scenic. The Festival of Mooncakes and Lantern Festival are the most popular; all the locals are actively involved in events. Indigenous people love and know how to have fun; during holidays all religious and national differences between representatives of indigenous population are erased. ... Open »
Kuala Lumpur
Kuala Lumpur is a cosmopolitan city; its culture is interesting and many-sided. During the year, locals celebrate a lot of interesting festivals, which include both European and Muslim, Buddhist and Hindu celebrations. Among European holidays the most prominent are colorful New Year and Christian Easter. However, supporters of Muslim ignore those holidays; the most important ... Open »
Sumatra
You have to perform all important acts only with your right hand (for example, shaking hands, passing and receiving money or food), since the left hand is considered evil. Travelers who visit local restaurants would notice another important feature - the absence of knives. The fact is that natives consider it a symbol of aggression, that's why they don't use knives during a ... Open »
Penang
Penang is famous for its majestic holidays which are always accompanied with the brightest customs and rituals. Bright events have turned into genuine local landmark being of greatest interest for guests and attracting curious tourists from all over the world. The brightest ethnic fest is considered to be the Thaipusam Festival being dedicated to the Hindu idol Murugan. The ... Open »

Cityguide on traditions, mentality and lifestyle of people in Johor Bahru. Learn the best periods to visit Johor Bahru to discover its soul - authentic festivals, events and celebrations. We will also reveal the interesting habits, attitude towards the world and to tourists in Johor Bahru.