Family trip to Batam Island with children. Ideas on where to go with your child 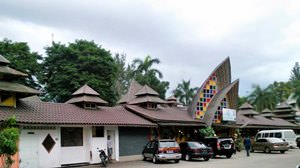 Even though Batam Island became an extremely attractive tourist destination only a few decays ago, it’s already can be considered as a perfect place for holidays with children. In some way, it is predetermined by the Indonesians’ attitude to their own kids, as they allow them anything they want. Well, probably just almost everything. For instance, it’s okay for locals to come to an important conference together with their child. All children can scamper about in the hall all together during such meetings. The local children are extremely active, that is why there are lots of playgrounds here on the island. Mini-football fields, basketball and tennis courts are always crowded, so a child can play with other kids anytime.
Guide to Batam Island sightseeing - things to see and to visit
Batam is close to Singapore; it’s difficult to imagine, but just 30 years ago there had been only a small fishing village on its territory. In 1989 Batam has become a free trade zone …

Open
The most attractive place for children is Ocarina Beach. And the real entertainment centre explains the popularity of the beach. There you can find a play-town for 3-5-year-old children, bike rental for those who’re a little bit older, swings and carousel of different kinds – what else children need to be happy? Every local large hotel has its own entertainment programs. During high seasons hotels organize different animation shows. Besides, you can leave your child in one of the children clubs, so you can spend some time on your own, too. Moreover, those kids who are already 8-years-old can take some diving lessons and then get the international children certificate by the end of the course, so they would be able to discover water areas and to see various underwater creatures with their own eyes.
Melayu Beach is a perfect destination for the casual family holiday. You don’t have to worry that your child would get too deep in the water as there is a gentle descent that would prevent such situations. Another attractive place is Viovio Beach. Children can play there with their beloved toys right on the beach instead of sitting in a small gazebo. Even though Dangas Beach is not that popular around the tourists, still it’s a perfect place for snorkeling with children, as the water here is so clear that you can enjoy seeing captivating underwater relief. Bale Beach is a perfect option for those whose kids don’t enjoy swimming and sunbathing all day long. Here you and your child can go and discover diverse mangrove trees which are growing just near the coast. Copyright www.orangesmile.com
Cuisine of Batam Island for gourmet with top restaurants and cafe
If you’re looking for European or American cuisine, you can easily find it here on Batam Island, too. There is a wide choice of hamburgers, sushi, Chinese noodles, pizzas, and pasta …

Open
Your kid is found of extreme activities? Then Cabana Club worth visiting! Bunch of various entertainments is waiting for the tourists. Here your children and you can ride a jeep, try waterskiing, learn how to ride a sea kayak or rent snorkeling or fishing equipment. You can teach your kid how to ride water skies or surf in Batam WakePark or CableSki Park. But remember that small children are not able doing something like it, so it’s better to find something easier for them. For instance, you can take your baby to the excursion around Batam Island or the adjacent islands. We can promise you it would be a real journey for your kid. 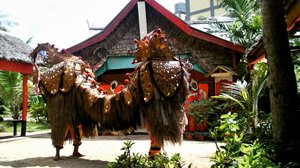 Babies would especially enjoy Batam Miniature House. It’s a small park where you can find dozens of miniature buildings designed in the traditional oriental style. If your child is interested in plants (particularly exotic ones) then Batam Botanical Garden worth visiting. There you can find a great collection of plants from all over the island. You can show your child the process of how lilies grow and tell him or her some amusing facts about all those lovely flowers in Taman Kolam Sekupang. Good shaped children would defiantly like a trip around the jungles enjoying local landscapes, flora, and fauna. There are lots of picturesque waterfalls on the island as well. Young climbers would also like the island, as there are several routes which are suitable for the beginners.
Authentic traditions, festivals and lifestyle of Batam Island inhabitants
Indonesians are quite a contradictory nation. On Batam Island, you could either be surrounded by friendly people who are always ready to help, or you could collide with an aggressive youth …

Open
Kids would also like local architecture. For example, don’t miss to see the Barelang Bridge. It looks highly attractive on the sunset and it actually looks like a part of a decoration for a Hollywood film. Your kid would also probably get interested in local temples which are quite peculiar for Europeans. The great example of it is the Tua Pek Kong Temple and its garden where you can enjoy seeing various vivid statues. Another unusual place is the Budhi Bhakti Temple. If you visit the village called Bakau Serip, you can show your kids how native Indonesians used to live, as the locals who live in this village are stuck to the traditional mode of life up to now; for example, they still do fishing and crafts on the everyday basis. The older children would really like to visit the renovated Vietnam War refugee camp. Nowadays it’s a museum.

This guide to family holidays in Batam Island is protected by the copyright law. You can re-publish this content with mandatory attribution: direct and active hyperlink to www.orangesmile.com.
Batam Island - guide chapters 1 2 3 4 5 6 7 8 9

♥   Amusement park 'Underwater World' Sentosa, 23.3 km from the center. On the map

Aquariums in Batam Island and nearby
♥   Aquarium 'Marine Life Park' , 23.4 km from the center. On the map 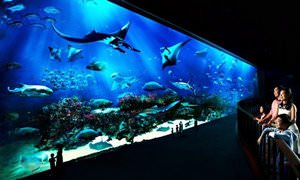 Distance from Batam Island center - 23.4 km.
The Aquarium of Singapore is famous for rare specimens of marine life. It is home to more than 20 bottlenose dolphins and bronze fish-hammer, which can’t be seen in every major aquarium of the world. Opening of the oceanarium was held in 2012. By now, it is the largest on the planet. … Read further 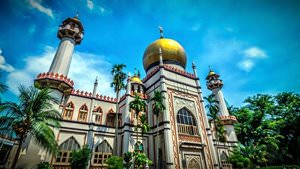 Distance from Batam Island center - 22.6 km.
At once there can be about 500 believers. The main peculiarity of the building is a huge gilded cupola. The mosque is situated on the territory of the popular touristic district Kampong Glam that’s why it is known mostly for every tourist. But not everybody knows that the first mosque was built there even at the beginning of the 19th century. Later the Muslim community has drastically increased and needed a bigger mosque. The building of the new mosque has begun by order of Sultan Hussain Shah. Until nowadays the mosque is named in honour of him. … Read further 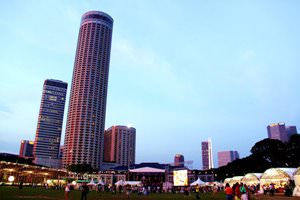 Distance from Batam Island center - 22.2 km.
On the 71st floor of the skyscraper there is a popular Equinox restaurant with circular panorama. Visitors will be able to test the most popular dishes of Asian and Western cuisine. Among the bars accessible to the hotel guests, one should especially mention the City Space. Delighted by the panorama of the city, visitors can taste the varieties of alcohol and elite cigars, brought from different parts of the world. … Read further

Interesting places to visit with children around Batam Island

Singapore City
Singapore is home for one more internationally famous park - Jurong Bird Park. More than 8,000 birds that belong to 600 different species live in Jurong. A visit to the unique nature reserve can easily become an unforgettable adventure as the park’s infrastructure is nothing but gorgeous. Guests are welcome to make boat rides on magnificent lakes and watch birds that live in ... Open »
Johor Bahru
Perhaps one of the most famous amusement parks for adults and children is located in Bahru. This is a place where every adult will not mind having fun with the children, strenuously pretending that he would never have come alone here. But really, who wouldn't want to visit Legoland? This is the first such theme park in Asia. It was opened in 2012. The park covers an area of ... Open »
Kuala Lumpur
The magnificent Desa Water Park is located in the city. This water park is outdoors and occupies a rather large territory. It includes a beautiful pool with artificial waves, special pools for young children, colorful slides of varying difficulty, and next to the pool, spacious terraces for sunbathing. Since the water park is very large, there are never any queues in it even ... Open »
Langkawi
In Langkawi, there are quite unusual amusement parks. The main inhabitants of the popular park Crocodile Adventureland are crocodiles. In this amusement park which actually is a farm for breeding crocodiles, visitors are offered interesting excursions. They are told a lot of interesting facts about one of the oldest animals in the world. Some small crocodiles can even be held ... Open »
Jakarta
Another equally attractive water park is the Wave PondokIndah WaterPark. It also occupies a vast territory and is very beautifully decorated. In this water park, you can comfortably rest all day. Children will definitely like the colorful slides and a pool with artificial waves, while adults will appreciate the recreation zones with sun loungers equipped in the shades of palm ... Open »
Ko Lanta
The Old Town will appeal to children who love beautiful views and appreciate the opportunity to meet other people and other cultures. If the child is used to entertainment centers, water parks, and slot machines, then disappointment awaits him here. There is no such infrastructure in the settlement. If the child is active and inquisitive, he will find something to do. If not, ... Open »

Guide to sightseeing and entertainment for children in Batam Island - parks, attractions, museums, zoos, water-parks. All fascinating and educational sites of Batam Island, which are must visit and see for your child. Find out the best discovery routes and places for kids (local theaters, exhibitions and museums), where you can spend quality time together. Batam Island for families with children.