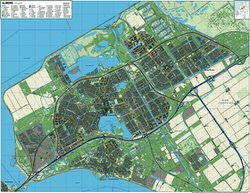 Interactive maps of hiking and biking routes around Almere-Stad

1. You can zoom in/out using your mouse wheel, as well as move the map of Almere-Stad with your mouse.
2. This interactive map presents two modes: 'Biking Routes' and 'Hiking Routes'. Use the '+' button on the map to switch between them.

This Almere-Stad map has two modes: 'Railway Network' and 'Landscape & Rural Map'. Use the '+' button on the map to navigate.

It is not customary to decorate the streets on Christmas Day in the Netherlands. This is a very quiet and family holiday. As a rule, almost no passers-by are met on the streets; there are practically no fairs here either. One of the main public holidays is the Day of the Queen or the King (on April 27). This holiday is celebrated by the whole country. Streets turn into the single continuous orange procession in honor of the queen or the king. Carnivals and parades are arranged in the cities. Ferries and barges get stuck in jams at the channels. In Amsterdam, huge scenes are set literally on every major street. Music and performances are heard from everywhere. This holiday is a symbol of the Netherlands, so tourists should definitely visit it. … Open

Given the fact that the city was founded only recently, Almere has neither important historical sights nor other monuments of antiquity. The main feature of Almere is its beautiful modern buildings, which can rightfully be considered true examples of modern architecture. Many buildings are executed in a unique futuristic style, being distinguished by unusual architectural shapes and original coloring. Many streets … Open

A unique modern building in the center of the city is occupied by the high-class hotel Apollo Hotel Almere City Centre. The unique shape of the building is known far outside of the country. The hotel offers customers more than one hundred comfortable rooms. All are decorated with a predominance of black and white; bright rooms are designed in contemporary style. Interior is complemented with an abundance of designer … Open

In Almere, every tourist will have awesome opportunities for fun after sunset. Jiggerz nightclub invites everyone who loves dancing until sunrise. Here you will enjoy delicious cocktails and modern music. Club Avenue is a trendy club located in the city center of Almere. Probably, it is the most popular night institution among locals due to its innovative concepts and best cocktail cart. Club Avenue has a top … Open

Perhaps the most popular meat dish is steak, which is usually served with aromatic sauces. The portion is quite large, so many tourists prefer to order one steak for two persons. The best compliment to the steak is a vegetable salad with traditionally added spicy herbs and cream. Of course, some salads are seasoned with vegetable oil. No less popular meat dish is a hotpot, the preparation of which requires a … Open

Traditions and mentality of Almere-Stad

The real estate here is cheap and the air is very clean. Local residents of Almere, in the majority, go to work in Amsterdam, Rotterdam or Utrecht every day, but in the evening they walk with pleasure in ecologically clean neighborhoods of their native city, the economy of which is focused primarily on the industry of agriculture. The main motto of Almere and its residents sounds like "People are creating a city". … Open

A zoological complex "Kemphaan Almere Junglie" is yet another attraction that is recommended to be seen by the whole family. In this large-scale centre is a large artificial pond in which today turtles and fish live. In this zoological centre you can also see some cute hamsters and guinea pigs, as well as some exotic birds. If the local city's sights and cultural objects aren’t quite enough, you can always … Open