Preparing your trip to Vienna: advices & hints - things to do and to obey 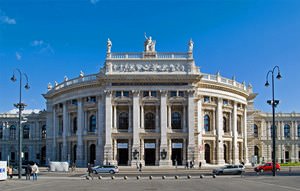 1. The public transport system is very well developed here. Trams and buses work from early in the morning until midnight. After midnight you will see special night buses on main streets of the city.
2. Taxis are rather cheap in Vienna, but "catching" it on the streets of the city is simply impossible. It is better to call a car to a restaurant or a hotel. You can also take a taxi in one of special sites.
3. The majority of shops and shopping centers are open until 18:00. Shops located near railway stations work until 23:00.
4. Tobacco products can be purchased in special stores and kiosks only.
5. Leaving tips in local restaurants is customary. The usual size of tips is 5 - 10% of the total bill. Leaving tips in summer cafes and small restaurants is not necessary. You can also leave a monetary reward to taxi drivers and hotel employees, which should be not less than 1.5 Euros. Copyright www.orangesmile.com
6. Anyone can rent a car in Vienna. For this purpose it is enough to have a credit card by any bank and an international driver's license. A person, who rents a car, should be at least 21 years old; some brands of cars are allowed for rent only to persons aged 23 or older.
7. Banks are the best place to exchange currency as they usually offer the most favorable rate. On Thursdays the majority of banks have reduced working hours, so they are closed for an hour and a half earlier than usual.
Guide to Vienna sightseeing - things to see and to visit
The history of Vienna is more than three thousand years. During the reign of the Habsburgs the city became the capital, and its imperial elegance is the legacy of the dynasty. Vienna is a …

Open
8. Tourists, who are used to save on accommodations, are recommended to visit Vienna during the period from July to September. At this time of a year special campuses named Studentenheim are opened in the city. Here guests will be provided with not only comfortable accommodations, but also with low-cost food – there is a special dining named Mensa on the territory of each campus.

What to visit being in Vienna - unique sights 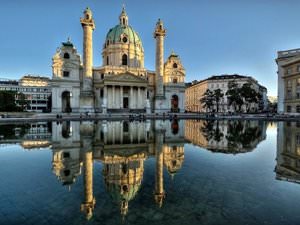 Distance from Vienna center - 0.3 km.
It is important to see not only the rich decorated façade but also the wonderful decoration. There you can see a lot of great frescoes and old icons. The main decoration of the church is an old altar with an unusual terracotta relief. Under the cupola, there is a great viewing point that is open for tourists. To get there you have to use an elevator and then the staircase. Inside the cupola is decorated with a delicate painting made by Johann Michael Rottmayr. When you get to the viewing point, you have an opportunity to see the cupola closer. … Read further 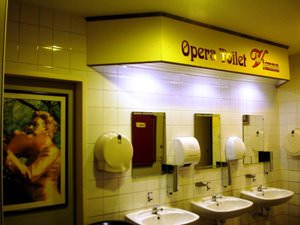 Distance from Vienna center - 0.4 km.
The renowned architect Friedensreich Hundertwasser and the painter Rudolf Scheffel are the creator of the most unusual toilet in Austria. Remarkable that the exclusive toilet looked a little different at first. Into the men's cabins the original colorful pissoirs were placed in the form of the female lips, which were later removed. The Viennese women consider this design immoral, so the original design pissoirs have been replaced by the typical ones. After the abolition the original Klobecken were not destroyed, but by the Internet Auction eBay sold. … Read further 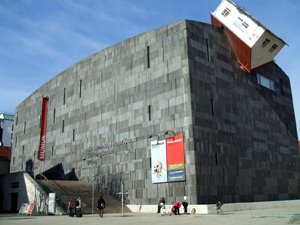 Distance from Vienna center - 0.8 km.
The MUMOK Museum, housed in 'House Attack', presents the visitor more than 7,000 unique works of art, the authors of which are the talented young painters of the 19th and 20th centuries. The building, which fully reflects the particularity of the talented sculptor's style, is also a masterpiece of modern architecture. … Read further

Tips for the cities around Vienna

Bratislava
2. The best way to exchange currency is in banks. You can also see specialized exchange offices throughout the city, but they usually provide less profitable exchange rates. Banks usually work from 9:00 to 16:00 on workdays. They may also close during a day for a small lunch break. Exchange offices are opened a little earlier, around 7:00, or they can work around the clock. ... Open »
Brno
2. Exchanging currency is recommended in large state-owned banks, such as Komercni banka, Zivnostenska banka and Ceska sporitelna. They offer the most favorable exchange rate. Travelers are recommended to use the services of private offices and exchange offices in extreme cases only. Quite often they attract clients by favorable exchange rates, but charge a very high ... Open »
Graz
2. All the taxis work in accordance with a unified tariff system, so taxi rates can only be changed depending on the time of day. Some firms charge an additional fee for luggage. Travellers who expect to make taxi rides outside the city should negotiate the cost of a ride with taxi drivers in advance. 3. The most beneficial way to make phone calls is to use public pay ... Open »
Linz
2. The main tourist center of the city is the Linz City Tourist Board located next to the Hauptplatz train station. The center serves its customers daily. You can take booklets describing sights and a city map, as well as learn about upcoming cultural events and book tickets in the tourist office. 3. The high tourist season is from May to October. At this time, the most ... Open »
Budapest
2. While exploring the city, tourists are recommended to use only public transport. The number of buses and trolleybuses is really big here, so you will have no problems with reaching any point of interest or attraction. 3. Those tourists, who expect to travel using taxi, should make sure their wallets are tight and full of US dollars. Many drivers accept payments ... Open »
Ostrava
2. A temperate climate prevails in Ostrava, so even it is never too hot here even in summer. Regardless of the season, fans of outdoor recreation and night walks should take some warm clothes with them on a trip. 3. In Ostrava, you can visit some of the most famous breweries in the Czech Republic. They brew many special beers, which have held the status of one of the best ... Open »

Travelling to Vienna - advices and tips. What should be provisioned in advance, the rules you might want to follow, and the things you better avoid doing in Vienna. We help you to make your trip smooth and easy, with no unexpected surprises.