Detailed hi-res maps of Varna for download or print 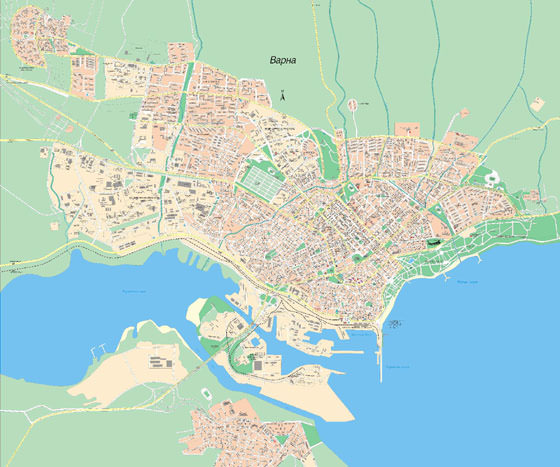 Today the tourism sector makes a big contribution to the country’s GDP. The growth prospect has been observed since 2007. More than 6% of the total number of the able-bodied population is employed in this sector. Most tourists come to Bulgaria from the neighboring countries of the European Union. The presence of several thousand mineral springs on the territory of Bulgaria, as well as ski resorts and coastal zones, gives an opportunity to the development of tourism without much significant investment. The foreign economic policy of the country is focused on the transparency of the economy and the conclusion of trade and mutually beneficial relations not only with neighboring European countries, but with the states of Asia and America. At present, Bulgaria maintains diplomatic relations with more than 120 countries of the world. For more than 60 years, Bulgaria has been an active member of the UN, and also participates in hundreds of other international organizations. … Open

Search for services, infrastructure and sights on map of Varna

Our guide chapters over Varna

Grand Hotel Dimyat holds a special place among the hundreds of Varna hotels. The Grand Hotel has chosen a beautiful modern building with panoramic windows, just a couple of minutes walk from the beach and the Sea Garden. All rooms available to hotel guests are designed in cream shades and decorated with designer furniture made of dark wood; in some of them, there are interior items with built-in lighting. The hotel … Open

Varna for children - what to visit

To visit all the children’s attractions of Varna, it will take more than one day full of excursions. One of the most popular entertainment centers for visitors to the city is the waterpark Aquapolis. It occupies a vast territory and offers visitors an impeccable choice of entertainment. There are large swimming pools with intricate colorful slides, and special pools with attractions for kids. The water park is … Open

Comfortable Ventura Boutique Hotel is sure to surprise its guests with a gorgeous decoration. Its rooms painted in coffee shades are distinguished by a very rich drapery with velvet and satin fabrics. The rooms have luxurious beds with high soft headboards and beautiful wooden furniture in the spirit of past years. In addition to cozy rooms, the boutique hotel has another attractive feature, which is its own … Open

Guests of Varna have three excellent shopping centers, of which Mall Varna is ideal for a family visit. It has dozens of men's and women's clothing stores, specialized shops with goods for children, brand cosmetics, and perfumery stores. You can not only shop but have a good time, as well. There is a modern cinema, casino, ice rink, an excellent bowling center and a children's club. Within the walls of the center … Open

Hotels with history of Varna

The most famous and prestigious hotel in Varna is Grand Hotel London. This is the place where the atmosphere of the early 20th century reigns, everywhere you can see priceless antique furniture and unique artworks. Elegant carpeting of aristocratic blue color, beds dressed in lace satin, old paintings in wooden frames and high windows - these are the main characteristics of luxury rooms. Bathrooms of all rooms … Open

7. Do not forget to leave tips in restaurants and cafes of the city. The size of tips is around 5 - 10% of the total order. Leaving money on table is considered impolite. It's better to round the amount of your bill to any convenient sum in a big way. 8. When communicating with locals, it is worth considering that some of their gestures have quite a different meaning from the commonly accepted one … Open