Detailed hi-res maps of Valletta for download or print 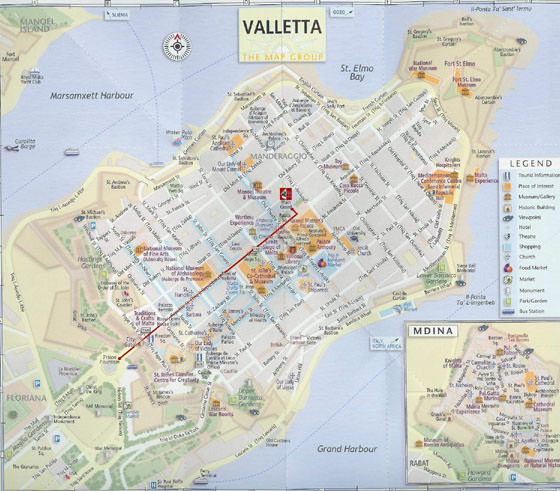 The actual dimensions of the Valletta map are 1867 X 1638 pixels, file size (in bytes) - 550838. You can open this downloadable and printable map of Valletta by clicking on the map itself or via this link: Open the map. 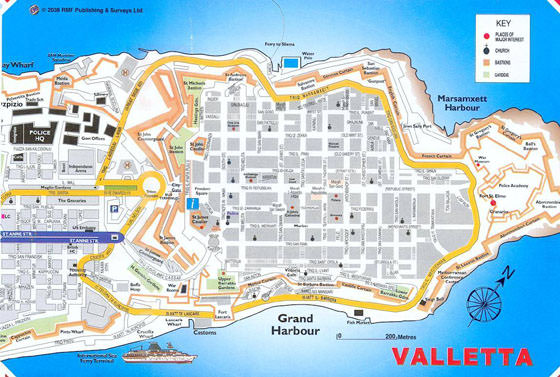 City tours, excursions and tickets in Valletta and surroundings

Moving around in Malta - transportation

It is worth noting that in Malta, the quality of the road surface is good only in large cities, most notably, the capital. On the outskirt of cities, the roads are often bumpy and winding, and without asphalt covering. That is why the speed limit in Malta does not exceed 70 km/h. Within residential areas, you are allowed to drive at a speed of only 40 km/h. Due to the fact that Malta was previously an English colony, the left-hand driven vehicles still operates in the country. Another alternative to a car can be the movement on off-road bicycles. They are ideal for overcoming the difficult terrain of Malta. … Open

Today, the state is trying to increase her investments in the education sector, with priority placed on higher education and it deeply appreciates highly qualified specialists. Also, free medical care is available to every resident of Malta. The number of people living below the poverty line is less than 1 percent. The rate of economic growth in the past 10 years alone is more than 9 percent per year. These figures have however decreased by 4 percent over the past year. This is as a result of the difficult economic situation around the world. This recorded political stability being enjoyed in the Country, is due to the fact that all segments of the population are sufficiently provided for. They receive support from the state and have the means for self-realization. The crime rate in the country is the lowest among all countries of the European Union. GDP according to the statistics of the last year is about $ 900 million. Meanwhile about 19 000 dollars is estimated per capita in the country. … Open

Search for services, infrastructure and sights on map of Valletta

Our guide chapters over Valletta

In search of original presents, many travelers are sent to Liberty Square. There, are located numerous souvenir shops and art workshops, that offer traditional souvenirs and exclusive crafts from local craftsmen. Incredibly beautiful glassware, fine lace, luxurious jewelry and hand-tied clothes from goat's wool - all these and many other items can be bought in the shops on the square. Connoisseurs of jewelry … Open

Hotels with history of Valletta

Attractive Valletta Merisi Suites apart-hotel found its location in a very beautiful historic building near St John's Co-Cathedral. During the building's reconstruction, its stone walls and high vaulted ceilings have been partially preserved, which gives modern apartments a special historic charm. The exterior of the historic building is also inimitable. Individual patios and furnished terraces, as well as a large … Open

2. Cafes and bars offer a wide range of alcoholic drinks, but beer and wine remain the most popular ones. Experienced travelers recommend buying locally produced beverages only as they are not only delicious but also reasonably priced. 3. Don’t hesitate to bargain on local markets and in privately owned shops. That will surely help to reduce the final price of the items you’re … Open

Luciano Valletta Boutique is also sure to please romantic natures and couples who are looking for a place suitable for spending good time together. The hotel operates in a beautiful historic building, each of its 13 rooms retains elements of original stone and wood finishing. One of the coziest rooms is designed specifically for couples. It offers restored antique furniture and a huge colonial-style bed with a … Open

The interior of Trabuxu Boutique Living Hotel harmoniously combines all colors of the rainbow and stylistic trends of different epochs. A historic stone building housing the hotel has retained its original interior decoration, original stone walls and elements of wooden finishing have been preserved in all rooms. The historic setting is complemented by modern accessories: colorful soft furniture, exquisite fabrics, … Open

A special attraction is the Republic Street – the main street of Valletta, which is entirely at the disposal of pedestrians. This street is full of many popular shops, souvenir shops, as well as restaurants and cafes. It seems as if life on the street never stops for a minute; it is possible to spend the whole day here interestingly. At the end of the street is an interesting historical landmark - the … Open