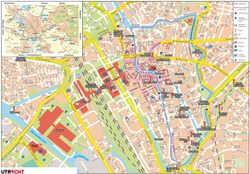 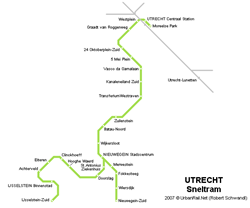 Interactive maps of hiking and biking routes around Utrecht

1. You can zoom in/out using your mouse wheel, as well as move the map of Utrecht with your mouse.
2. This interactive map presents two modes: 'Biking Routes' and 'Hiking Routes'. Use the '+' button on the map to switch between them.

This Utrecht map has two modes: 'Railway Network' and 'Landscape & Rural Map'. Use the '+' button on the map to navigate.

Our guide to Utrecht

Traditions and mentality of Utrecht

Don’t allow yourself careless phrases in conversation, as all said is likely to be taken literally. So, inviting somebody to visit or having dinner remember about that, otherwise it will be taken as a sign of mauvais tone. The culture of locals is full of paradoxes and unexpected features. They carefully preserve the cultural heritage of the past, while being progressive and open to new things. Local people … Open

Van Verdun castle is an outstanding historical monument. Its construction took place in the first half of the 15th century. For hundreds of years of its existence, the castle changed its status repeatedly. In the 19th century, it housed a military prison, later they opened there a hospital. In the early 20th century, the historic building belonged to the Ministry of Defence. Recently, the old castle has been fully … Open

4. You should pay for goods and services exclusively in euros; other currency is not accepted. Travelers are advised to exchange money at home before the trip, as in this case terms would be the most profitable. It’s also worth noting that small shops and supermarkets are reluctant to accept banknotes in denominations above 50 euros, so it’s better to take enough of small bills. 5. Dinner at a local … Open

The Vermeulen cafe&restaurant is considered one of the most popular holiday destinations among young tourists. This place has a very bright and original decor. Visitors can take one of the tables in the hall decorated with exquisite designer or stay in the bar area. Vermeulen is ready to offer visitors a wide selection of international cuisine dishes, snacks and drinks. There is always welcoming and relaxed … Open

Travelers going to Utrecht in search of new experiences and exciting entertainment won’t be disappointed. The most amazing and unusual entertainment center of the city is a miniature park Madurodam. The most interesting sights of the country are recreated there in 1:25 scale. The park occupies a rather impressive space - about 18,000 square kilometers; it will take more than one day to inspect its vast … Open

In Utrecht there is the oldest religious building in the Netherlands; the first mention of the Cathedral (Domkerk) dates back to the 7th century. The ancient religious building was severely damaged by fire in the mid13th century; hundred years later it became the place to build a new cathedral, which is now called Domkerk. The Cathedral owns its name because of the unusual architectural form; it resembles a tall … Open