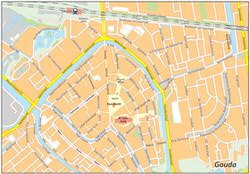 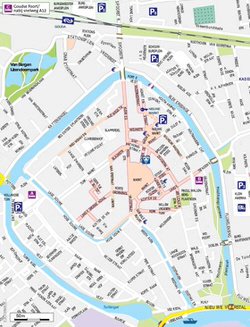 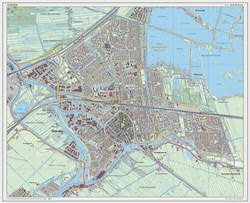 Interactive maps of hiking and biking routes around Gouda

1. You can zoom in/out using your mouse wheel, as well as move the map of Gouda with your mouse.
2. This interactive map presents two modes: 'Biking Routes' and 'Hiking Routes'. Use the '+' button on the map to switch between them.

This Gouda map has two modes: 'Railway Network' and 'Landscape & Rural Map'. Use the '+' button on the map to navigate.

Our guide to Gouda

Currently, the Sint Janskerk is a basilica, the shape of which is reminiscent of a cross. Inside the church, visitors can still see an old and unusual musical instrument, carillon. It was installed here in the 17th century. Besides that, take a look at the gorgeous stained-glass windows that decorate the Sint Janskerk. These stained-glass windows were made in the 16th century, at the time when Catholics owned this … Open

Maps of Rotterdam
Rotterdam offers its tourists various interesting entertainment. The first thing every traveler must try here is to take a ride on the Splashtours bus. This invention is simply incredible: an amphibious bus, which after a trip along the roads of the city, boldly moves down from the embankment and continues its journey along the river. What can be more incredible and extreme as ... Open »
Maps of Dordrecht
Dordrecht has always been famous for its interesting museums, visiting which will let tourists learn more about local culture and get acquainted with the traditions and lifestyle of indigenous people. Museum 1940-1945 is dedicated to tragic events in the history of mankind, and Huis Van Gijn carefully restores the lifestyle of rich merchants in the XIX century. Dordts ... Open »
Maps of Utrecht
In addition to exploring many shops, holidaymakers have an opportunity to enjoy the splendor of local parks. A city is great for hiking and biking, anyway, boat trips along local channels are more popular among tourists. A significant portion of residents are students, so the nightlife of Utrecht is very rich and diverse. Fans of club music and noisy discos will appreciate ... Open »
Maps of Haarlem
Harlem at night is as fun-filled as in the daytime. You can go to a coffee shop - Willie Wortel's Sativa is considered the best among those presented in the city. Beer lovers spend their evenings in Uiltje Bar, go to the above-mentioned brewery or Proeflokaal De Blauwe Druif. Those who prefer to combine a great evening with a great sense of humor will be delighted with this ... Open »
Maps of Amsterdam
Amsterdam offers its visitors a broad range of recreational activities: indoor karting and skiing, race-car driving and kite-surfing, snowboarding and climbing. At the Snow Planet – an amazing indoor slope you can enjoy skiing and snowboarding, but dress good – the temperature is quite low here. The prices per various kind of activities start from €16. Always wanted to ... Open »
OrangeSmile.com - online travel reservation expert providing reliable car rental and hotel booking services. We feature more than 25.000 destinations with 12.000 rental offices and 200.000 hotels worldwide.
Secure Server