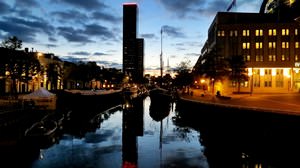 In the very heart of the city is one of its main historical symbols - the “falling” De Oldehove Tower. The erection of the church tower began in the first half of the 16th century. Now its inclination angle is much higher than that of the world-famous Leaning Tower of Pisa. Besides its unusual appearance, De Oldehove attracts travelers with its observation deck. Everyone can climb the stairs to the top where the observation deck overlooks the main streets and attractions. In clear weather, you can also admire the surrounding areas.
Cuisine of Leeuwarden for gourmet with top restaurants and cafe
Leeuwarden is the capital of the province of Friesland, so in addition to traditional Dutch food, you can also try original Friesian dishes in local restaurants. Such include a variety of …

Open
Nearby is the beautiful Church Saint Boniface, which got its name in honor of the famous Anglo-Saxon missionary. The construction of the church was completed in 1882. Since the late 19th century, it has the highest spire in Friesland. The church is characterized by magnificent interior decoration, it has beautiful stained glass windows, as well as other hundred years old elements. The main treasure of the church is a richly decorated 19th-century organ. Many come here specifically to listen to its sound. Church visitors are allowed to climb the bell tower where the highest observation deck in Leeuwarden is located.
The city has one of the largest and most important museums in the region - the Fries Museum. It tells visitors about the history and culture of Friesland through a very diverse collection. It stores old historical documents and manuscripts, and a separate exposition is devoted to the history of the region's industrial development. Of particular interest to tourists are collections of ancient national costumes and jewelry, weapons and musical instruments. Works of art make up a bulk of the museum collection. A few years ago, the museum opened an additional building to present historical artifacts related to World War II. This new building is distinguished by modern technical equipment, many information displays and interactive exhibits. Copyright www.orangesmile.com
Authentic traditions, festivals and lifestyle of Leeuwarden inhabitants
Leeuwarden Residents are known for cherishing their traditions, hard work and an indifferent attitude to modern cultural trends. In 2018, the city was declared the cultural capital of …

Open
A very interesting cultural center is the Het Princessehof National Museum of Ceramics. It occupies a spectacular historic building dating back to 1731. Once the luxurious palace belonged to the princess so that's where its name came from. The royal lady was known for her caring attitude to pottery and ceramics. In her palace, she has gathered a rich collection that included works by the best local and foreign masters. 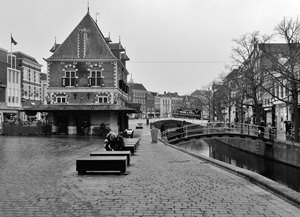 The next owner of the palace decided to open a thematic museum in it. Its collection is considered one of the richest in the world to this day. Here you can see ceramics made by the best craftsmen from Delft, admire elegant vases and plates on which famous Chinese craftsmen worked. The palace has also preserved a large collection of antique furniture and artworks, however, clay and ceramics are still considered the main values.
Your active city break in Leeuwarden. Attractions, recreation and entertainment - best places to spend your day and night here
Leeuwarden offers its guests excellent conditions for an active, exciting vacation. Within the city, you will find numerous entertainment centers to suit every taste, and out of it, there …

Open
Among Leeuwarden's outstanding architectural monuments, it is worth highlighting the old Town Hall built in 1715. Over the years, the building has been repeatedly restored and rebuilt, so today its architecture combines elements of various styles. Back in the 18th century, a market square was built next to the Town Hall. Fairs are regularly held on it even today. Every week, local farmers present their best products here. 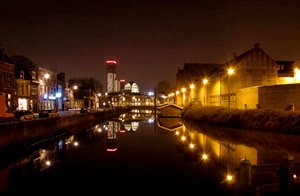 Connoisseurs of contemporary art would probably be interested in visiting the Museumhuis Van Eysinga. This art gallery is also housed in a spectacular historic building whose age exceeds two centuries. It was possible to preserve its unique interior decoration, which is no less valuable than the exhibits presented in the museum. Visitors can see some old wooden elements and fragments of murals, elaborate stucco molding and wood carvings. Unusual art installations made by contemporary masters are placed amid such historical splendor. Here you can see paintings of various styles, the best works of modern photographers and designers.
Advices to travellers: what you should know while being in Leeuwarden
1. The easiest way to get to Leeuwarden is from Amsterdam, as the cities are connected by railway. Many tourists prefer a car ride along the dam, which is considered an important local …

Open
Leeuwarden boasts many beautiful historic streets, and Voorstreek is one of the most interesting for walking. On both sides, it is framed by beautiful buildings of the 18-19th centuries. The town's main pharmacy building has been preserved on this street. The pharmacy has been working here since 1904, for over a hundred years. It is of great interest to travelers, as in addition to medicines it sells unique balms and cosmetics.

In the section below, you can get one of our excursion, activities or city discovery tours over Leeuwarden and surroundings. Our website offers 10-30% lower ticket prices, when compared to the offline purchase on the spot.

This guide to cultural sights Leeuwarden is protected by the copyright law. You can re-publish this content with mandatory attribution: direct and active hyperlink to www.orangesmile.com.
Leeuwarden - guide chapters 1 2 3 4 5 6 7 8 9
Car rental on OrangeSmile.com

The company was honored with several important awards. For example, Forbes Magazine named Hard Rock a Top Employer for Women in 2019 and 2020. Last year, Forbes additionally called the company one of the Best Employers for Diversity. Some hotels in the portfolio are truly unique – the first Guitar Hotel in the world, which is open in South Florida, the US, was selected as the 2020 Property of the Year by Global Gaming. In addition to the operating hotel in London, Hard Rock plans to open one more hotel that will be located in the former Kellogg’s factory. The abandoned factory will be transformed into a 353-room hotel. The first phase is set to open in late 2022.

Photogallery of cultural heritage of Leeuwarden

Excursions over cultural sights of neighbours of Leeuwarden

Groningen
The Museum of Groningen University is one of the most symbolic establishments of the city. During an excursion here guests will find out about the most important events in the history of the city and the history of the university foundation. Among the items exhibited in the museum guests often mention a very valuable collection of books. Not far from Groningen is located ... Open »
Zwolle
A visit to the old Town Hall and the nearby Church of St. Michael is an essential part of any excursion in Zwolle. The tower of the magnificent cathedral remained the tallest construction in the city until the mid-17th century. The church was severely damaged by the fire but was later restored in full accordance with the original project. The inner design of the building ... Open »
Alkmaar
An important religious landmark is the Cathedral of St. Lawrence. Next to it, the main city street begins, on which you can find numerous restaurants and cafes, as well as antique shops. It also accommodates the Town Hall building - a fine example of Gothic architecture. Another remarkable attraction is Huize Egmont, a mansion built in the middle of the 18th century ... Open »
Almere-Stad
Almere is a young and beautiful city, which was founded on the lands literally reclaimed from the sea. A hundred years ago, the shallow Zuiderzee Bay that covered its area was drained due to a serious threat of floods. The construction of the first buildings of the modern city began in 1976, eight years later Almere has been transformed into an independent municipality, and ... Open »
Apeldoorn
One of the main landmarks of Apeldoorn is located on the outskirts of the city. This is the internationally famous Het Loo Palace. The magnificent palace was built in 1685 on the site of the Royal Estate Het Loo by the order of William III. For many years, the gorgeous palace was the favorite place of the royal family and served them as a summer residence. In 1962, the palace ... Open »
Amsterdam
While speaking about cultural attractions of Amsterdam, it is surely worth noting numerous medieval architectural monuments. Munttoren medieval tower is, definitely, one of the most notable sights of this place. The building of the tower was completed in the end of the 15th century. The tower was reconstructed in the 17th century and so today guests can visit this magnificent ... Open »

Culture guide to Leeuwarden. Which fascinating sights to visit once you are in Leeuwarden: temples, churches, museums, theaters and castles. Recommendations (with addresses, phone numbers and links) on the places 'must visit' in Leeuwarden. Plan your own city excursion by using this page info!