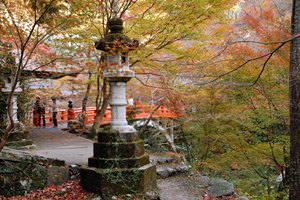 Our suggestion on the way to observe the most important architectural landmarks of Kyoto is very simple – fly, read, watch. Thanks to our original 3D technology of flying over cities, you will be able to “visit” (see the video) and watch the most important architectural landmarks of the city - Kiyomizu-dera, Kyoto Tower, Tenryu-ji Temple, Chion-in, Imperial Palace and many others. We have carefully selected the supplementary information for each of them, including interesting historical facts and a collection of photographs. Additionally, we have placed all main sights on the map of Kyoto below, since this information can be useful when you plan your walking routes in Kyoto. 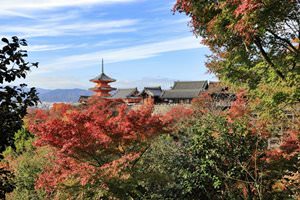 Facts:
» Kiyomizu-dera is literally translated as the Temple of Clear Water from Japanese. It is a place of worship of the Goddess of Fortune with a hundred arms.
» On the Otova hill slope, there is a namesake waterfall. The temple is named like that due to its clear water.
» There is a wooden construction in front of the temple. It has a wonderful panoramic view of the natural landscape. The building is surrounded by cherry trees and maples.
» Masters built the platform with 139 pillars and the main hall of Kiyomizu-dera without nails.
» Near it, there is a sanctuary, Jishu-jinja. Two boulders located at a certain distance from each other are very popular. The legend says that those who walk this distance blindfolded find happiness within marriage.
» In the territory of the temple, there is a waterfall of three streams. They mean health, knowledge, and love. You can even drink water but only from one of the sources. Before this, you must worship the statue.
» Near it, there are 200 stone statues of idols, patrons of children, and travelers’ defenders.
» In the territory of the temple, there is also the three-tier pagoda and the library of sutras (moral tales). The entrance is guarded by stone statues. 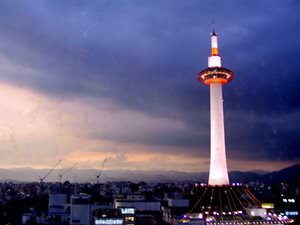 Facts:
» The authorities had built the contemporary architectural marvel before the Olympic Games started. The new building was built at the site of the old post office at the end of 1964.
» The new construction met with a mixed reaction of the locals. Some people thought that the spire spoiled the historical appearance of the city.
» The steel tower with the observation platform and the spire is 131 meters high. The tower weighs 800 tons. The modern “needle” construction is situated in the roof of the nine-storied building. There is also a hotel and a department store.
» The tower has a panoramic view of the city. The construction is fixed with metal frames. The interior is distinguished by a thousand alternating steel rings. Additional rings are protected by steel plates painted in white.
» The construction resembles a candle with its exterior. The building is very stable and can withstand typhoons, earthquakes, winds of 90 meters per second, so natural disasters will not damage it.
» Over a million people visit the observation platform every year. You can reach it by one of the 9 lifts for 90 seconds. You can use a telescope to obtain a better overview.
» The lights of the tower serve as pointers. The tower is the highest construction in the city. 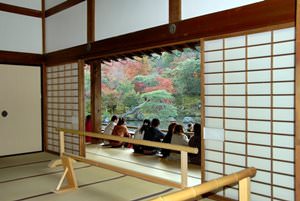 Facts:
» Tenryu-ji Temple is the “Dragon of the Sky”. As the legend says, it was named like this because the priest dreamed about the golden serpent flying from the river. It was interpreted as a wayward soul. The Buddhist temple was built as a sanctuary in memory of the Emperor.
» To cover the construction costs, subordinates had to trade with China.
» The main building was destroyed in a fire. The contemporary reconstruction lets see the original exterior of the building. The temple possesses about 30 hectares of land.
» You can see a dragon on the ceiling of the Hall of Sermons. The picture is unusual because the dragon’s gaze is always fixed on the visitor.
» Visitors are offered to taste vegetarian dishes, the recipes of which have been preserved from the time of the first Buddhist monks.
» The garden with a big pond planted in the 14th century is also distinguished by its nature. The nearby hills are a sort of the next level of the park.
» There is a stone “waterfall” in the center of the garden. The rocks are placed in the way that they resemble the streaming water.
» There are tombs of the nobles in the territory of the temple. In Tenryu-ji, you can go through the gate to the lecture and meditation hall.
» it is accustomed to place a coin into the wooden box in front of the house of prayer. 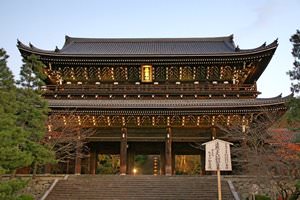 Facts:
» The bell in Chion-in proclaims the New Year. The log attached to the ceiling beam is used to swing 70-ton construction.
» 16 servants push it 108 times. As the Japanese think, this number represents passions that overpower the individuals.
» In 1636, the copper item was cast for the Buddhist sanctuary. Hammered rings that support the weight of the bell were made by masters in making swords.
» Chion-in consists of many constructions. Monk Honen found a sect that preached the hope of salvation from misfortunes. It settled right in the territory of the temple in 1523. There is a belief that the soul if the Master still patronizes the temple.
» Before entering cult sanctuaries, you must wash your hands and rinse your mouth in the special bowl of the fountain.
» You can enter the territory through the gate that is 24 m high and 50 m wide.
» You can see pictures of Buddha and his 16 successors in inner rooms. There are colorful paintings and flying serpents on the ceiling, bars, and columns.
» The halls have a squeaky floor, so steps of unwanted visited are heard.
» There are 3 rose petals (a family emblem) carved in all side roofs.
» When the building was being reconstructed, an umbrella was found. The architect protected the building from the fire this way. 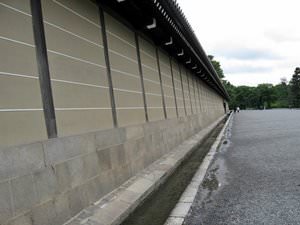 Facts:
» Several buildingы of the Imperial Palace were built in 1855. Original constructions were destroyed in a fire. Almost a thousand journeymen reconstructed them.
» One of the palace, “Omya”, is a holiday home for the members of the Royal Family visiting Kyoto.
» The territory of the Palace is protected by long massive white walls with brown faded beams. There are 6 gates. The complex is 1 300 m long and 700 m wide.
» The free zone is available for tourists. Alleys are covered with gravel. In the park, you can see pines, cherry trees, and maples.
» One of the palaces includes the audience hall. There is a monarch’s room in the other one. There is also the Empress’s Room and the Study Room.
» The Imperial Palace saw 28 generations of rulers living here.
» The rooms are separated by sliding panels. On the partition walls, you can see pictures of flowers and animals and images from Lives of the Saints.
» All the constructions of the palace have its functions: the refectory, prayer rooms, the meeting room, household buildings, and warehouses.
» Roof ridges have the shape of arms and depict chrysanthemums.

CONTINUE - PART II »»
This guide to architectural sightseeing in Kyoto is protected by the copyright law. You can re-publish this content with mandatory attribution: direct and active hyperlink to www.orangesmile.com.
Kyoto - guide chapters 1 2 3 4 5 6 7 8 9 10

Build your walking routes in Kyoto on the landmark map 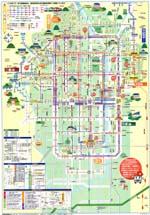 Architectural landmarks in the regions around Kyoto

Osaka
The curved flooring above the moat leads to the white castle on the high hell. Originally, it was built as a military post. The road winds among multiple defense towers that were built by different owners. You can see the names of warlords on the arms in the castle walls and roof. The hedged buildings with branches give an impression that the main building of the castle moves away. Himeji Castle (1333) is a five-level building. There are rooms ... Open »
Tokyo
The height of Tokyo Tower is 332.6 meters, which at the time makes it the highest steel structure in the world. The Tokyo Tower is in the list of 29 highest object of the World Federation of Great Towers ranked 14th of them. Today the tower is rather a tourist attraction; it’s considered one of the symbols of Tokyo. TV Tower houses an observation deck, halls and museums. Beneath the tower there is the 4-story building that is occupied by ... Open »
Shanghai
The Oriental Pearl Tower is the TV tower in Shanghai built in 1994. The height of this TV tower is 468 meters. This is the third highest in Asia and the fifth highest tower in the world. The tower consists of 11 spheres of different sizes. Two largest spheres are 50 m and 45 m in diameter, the diameter of the smallest and the highest spheres is 14 meters. Two of the large spheres are linked by three columns, each of which is 9m in diameter. ... Open »
Beijing
The Forbidden City today is called the Former Palace; that's the main palace complex of the Chinese emperors. Only the emperor and his court had the right to be there, and for the rest this part of Beijing was closed. The palace was separated from the city by ditches and red walls. The Forbidden City is the largest palace complex. It's considered one of the five most important palaces in the world. The Palace Museum is a veritable storehouse ... Open »
Hong Kong
It’s a modern memorial built in 1993 in the form of a large seated statue of Buddha that is 34 metres high and weighs 250 tons. To get to the statue, you need to climb 268 steps. There’s a temple inside. The first floor decorated with paintings of the Buddha’s earthly life houses the Hall of Benevolent Merit. The second floor has a wooden panel depicting 160 pairs of eyes conveying different human emotions. The third floor houses the Hall ... Open »
OrangeSmile.com - online travel reservation expert providing reliable car rental and hotel booking services. We feature more than 25.000 destinations with 12.000 rental offices and 200.000 hotels worldwide.
Secure Server