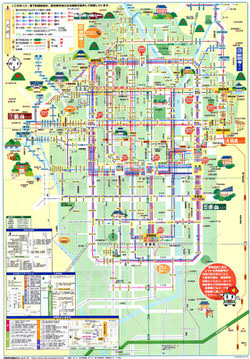 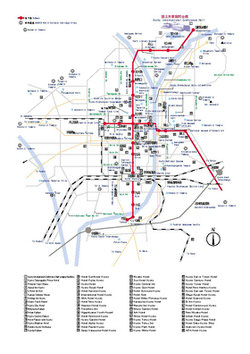 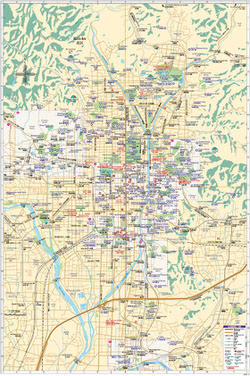 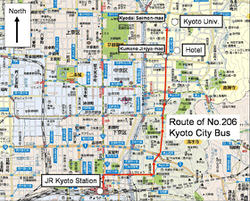 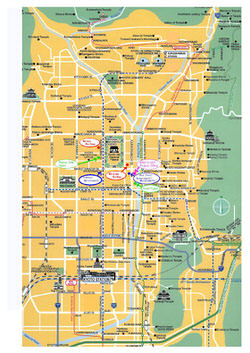 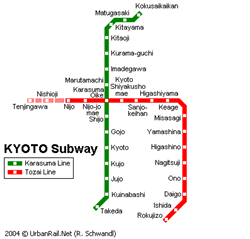 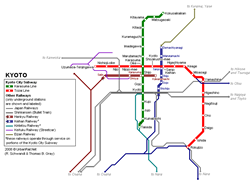 Interactive maps of hiking and biking routes around Kyoto

1. You can zoom in/out using your mouse wheel, as well as move the map of Kyoto with your mouse.
2. This interactive map presents two modes: 'Biking Routes' and 'Hiking Routes'. Use the '+' button on the map to switch between them.

This Kyoto map has two modes: 'Railway Network' and 'Landscape & Rural Map'. Use the '+' button on the map to navigate.

Our guide to Kyoto

Fans of shopping will enjoy Kyoto; the best places for their hobby will be Shin-Kyogoku, Kawaramachi and Teramati streets. There are shops and shopping pavilions for all tastes; shopping centers where you can buy items made of porcelain and ceramics are particularly popular. Nishiki Market, where you can buy exotic delicacies and traditional sweets, is good for foodstuff. Many travelers prefer to go to the JR … Open

Numerous Japanese cuisine restaurants represent the main gastronomic dignity of the city, however, fans of other culinary cultures wouldn’t find Kyoto boring and monotonous. National cuisine restaurant Issian Pontocho is one of local attractive places. It is one of the most prestigious restaurants in the city, but this aspect has barely affected prices. Marvelous ethnic dishes prepared by classic recipes will … Open

Traditions and mentality of Kyoto

Kyoto is a unique city of festivals - beautiful celebrations are carried out here almost every month. Many celebrations have a long history; a large part of them are devoted to the important religious holidays and historical events. Preparing for the next festival is an important and long-awaited event for all local residents. Citizens have always been active in the organization of cultural events; they adorn city … Open

Of national significance is the Nijo Castle. Its construction began in 1603. It was erected as the official residence of the Tokugawa dynasty. This castle is one of the most luxurious in Japan. It has almost completely preserved the original facade decoration, and in the castle's interior, are hidden unique historical relics. Visit to the castle is available to tourists all year round, but most travelers prefer to … Open

Kyoto for children - what to visit

There are several unusual amusement parks in Kyoto. The most original is Toei Kyoto Studio Park. It is sure to please those who are fond of Japanese cinema and cartoon art. The park is thematic and dedicated to famous cartoon heroes and art movies. In this park, there are a lot of intriguing attractions, and animators dressed in costumes of famous heroes walking around. Every day, fascinating entertaining … Open

In search of original souvenirs, one can go to Bento&co where very cute traditional-style and home products are sold. Ladies who are keen on cooking will like the store more than others, as they will be able to buy some wonderful baking tins, colorful boxes for storing various products, and other useful kitchen accessories. In search of interesting antiques, one can walk along Shirakawa Gion where the most … Open