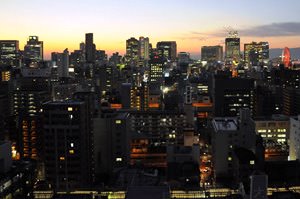 It’s hard to imagine Osaka, and Japan in general, without its famous architectural landmarks. Umeda Sky Building, Shitenno-ji, Osaka Maritime Museum, Nagai Stadium, and Tempozan Ferris Wheel have shaped the historical and architectural look of Osaka. Let’s take a closer look at these landmarks from an unusual perspective – simply fly over the main sights! The supporting video includes a virtual tour around the above mentioned architectural landmarks of Osaka in HD format. Below, we will add the most exciting historical facts regarding every place of interest. The overview map of all iconic landmarks of Osaka can be found at the bottom of the webpage. 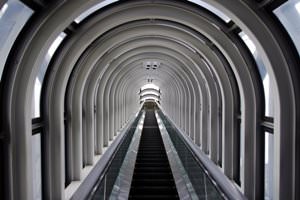 Facts:
» Umeda Sky Building is two 40-storied towers linked by bridges, escalators, and a “floating garden”. They are called «Tower East» and «Tower West», which means that these are eastern and western towers.
» There is a corner with a fountain and plantings above the ground, on the floors.
» The glazed lift is on the outer side of the building and rises to the 35th level.
» On the facade, you can see spraying nozzles in the walls. It gives the impression that you see floating sky-blue clouds.
» The building is faced with silver material shining in the sun. Mirror panels of the interior of Umeda Sky Building reflect nearby constructions. The backlight is switched on at nights.
» Escalators in the shape of transparent tubes lead to the garden diagonally. As it moves, you can see a mat with the digit “173” on it, which means the height of the building.
» 173-meter skyscraper was opened in 1993. On the roof, there is a glass and concrete observation platform serving as an outdoor terrace. There is also an observation platform inside.
» The ground floor is occupied by stores, restaurants, and gift shops. There is an altar. 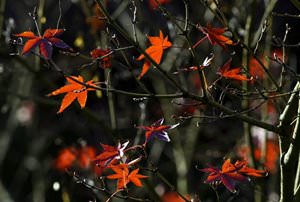 Facts:
» The temple with a history of 1 400 years suffered from both natural and human disasters.
» Its exterior represents the influence of Chinese architecture.
» When the building was being reconstructed, its original design had been preserved. When it was restored in 1957, reinforces concrete constructions were built instead of wooden ones.
» The treasury of the temple houses pieces of art and sculptures dedicated to household items of Shitenno-ji.
» The five-storied pagoda represents five elements: earth, air, fire, water, and sky.
» The entrance is guarded by a gypsum dragon. The spiral staircase leads to the personal chamber.
» At one time, preachers who manifested Buddhism studied in the temple.
» There is a wooden platform used for speeches in the center of the temple.
» It also has a preserved tradition to celebrate some holidays. On 22 April, the locals perform stage plays, courtier ceremonies (Bugaku), sing and dance.
» Shitenno-ji represents four rulers who worship Buddha.
» The modern temple complex includes several gates, a pagoda, pavilions, and a ritual gate. 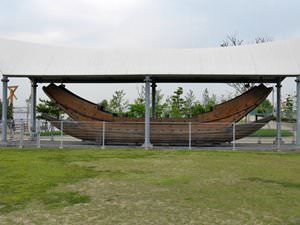 Facts:
» You can reach the Osaka Maritime Museum through the underwater tunnel that is situated 15 km from the shore.
» The building of the shape of the silver dome is 40 meters high (four floors) and has a diameter of 80 m. It is located right on the water. It is upheld by reinforced concrete pillars with steel hoods. The weight of the building is 1 200 tons.
» It has a comfortable temperature regardless of the weather. 15-mm glass withstands the water pressure and gets opaque in the sun. The museum consists of blocks: an entrance pavilion, a tunnel (its length is 60 m and width is 15 m), and a building. The tunnel is not illuminated enough to give the impression that you go under the water.
» The institution has received a special prize for “structural perfection”.
» The museum is proud of the exact life-sized copy of the wooden merchant ship of the 19th century. You can see it from the inside.
» The artifacts dedicated to maritime trade development are also of great value. Exhibits have been chosen based on the maritime theme.
» There is an outdoor observation platform and two halls where you can watch 3D films on maritime issues.
» You can show your skills in sailing on the stimulator yacht. 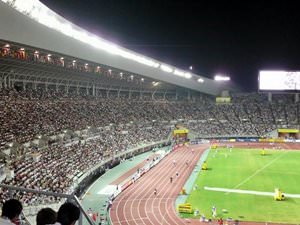 Facts:
» The city football and sports stadium was built in 1964 for the Olympic Games in Tokyo.
» Over 30 years after (in 1996), it was reconstructed: the area of the stadium increased and the number of seats grew up to 50.
» The constructed cost 380 million dollars.
» The local football club trains and plays home games at the stadium. Championships in athletics are held here.
» The size of the playground is 107x71 m. In 2002, the Japanese National Sports Festival was held here.
» Osaka took part in international games in 2008. The stadium management offered to hold this event right at the stadium. But Beijing was honored to hold the Olympic Games.
» The official name is “Osaka Nagai Stadium”. It includes an additional sports ground, the so-called Aid Stadium. It accommodates 15 thousand visitors. The sports arena including jogging tracks belongs to the prefecture of Osaka.
» The music band from South Korea Bing Bang gave a concert on the platform of the stadium. When the band performed, the stadium was illuminated with colorful lights.

Facts: » You can see the whole city for 15 minutes from the Ferris Wheel that has a diameter of 100 meters and is 112 meters high. The Wheel was opened in 1977.
» Depending on the weather, red and orange lights on the facade represent the sunny weather, the green color represents the cloudiness, and blue lights predict the rain.
» The Tempozan Ferris Giant Wheel is located in Osaka Bay.
» Before taking an air trip, you can have a picture in front of the cloth of plantings and toys. So, you will get commemorative pictures when leaving the venue.
» Then, the worker will take you to a free cabin and close the shutters. 60 cabins accommodate 480 people. The music sounds here. Videos about the sites you can see from the Wheel are broadcast in Japanese and English. In the cabin, there is a hanging toy fish. Perhaps, it is the advertisement of the aquarium.
» In the air, the cabin stops for a few moments but it is part of the program.
» There are separate isolated capsules for VIP visitors.
» The prototype of the big vertical wheel with capsules attached to the rim was the construction built in the 17th century. At that time, it was set in motion by people’s efforts.
» The first Ferris Wheel was constructed by an American engineer in 1893.

CONTINUE - PART II »»
This guide to architectural sightseeing in Osaka is protected by the copyright law. You can re-publish this content with mandatory attribution: direct and active hyperlink to www.orangesmile.com.
Osaka - guide chapters 1 2 3 4 5 6 7 8 9 10 11

Build your walking routes in Osaka on the landmark map 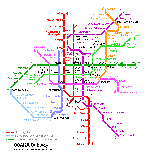 Architectural landmarks in the regions around Osaka

Kyoto
The Kyoto National Museum is a red brick building. Its total area is 50 thousand m2. The new building built in 1966 houses permanent collections including pieces of Asian arts. 12 000 exhibits are placed into three sectors. 230 exhibits are national Japanese treasures. The collection includes exhibits that have been kept in temples, royal palaces, and personal houses before. There are 200 000 photos. The showroom is divided into three ... Open »
Tokyo
The height of Tokyo Tower is 332.6 meters, which at the time makes it the highest steel structure in the world. The Tokyo Tower is in the list of 29 highest object of the World Federation of Great Towers ranked 14th of them. Today the tower is rather a tourist attraction; it’s considered one of the symbols of Tokyo. TV Tower houses an observation deck, halls and museums. Beneath the tower there is the 4-story building that is occupied by ... Open »
Shanghai
The Oriental Pearl Tower is the TV tower in Shanghai built in 1994. The height of this TV tower is 468 meters. This is the third highest in Asia and the fifth highest tower in the world. The tower consists of 11 spheres of different sizes. Two largest spheres are 50 m and 45 m in diameter, the diameter of the smallest and the highest spheres is 14 meters. Two of the large spheres are linked by three columns, each of which is 9m in diameter. ... Open »
Beijing
The Forbidden City today is called the Former Palace; that's the main palace complex of the Chinese emperors. Only the emperor and his court had the right to be there, and for the rest this part of Beijing was closed. The palace was separated from the city by ditches and red walls. The Forbidden City is the largest palace complex. It's considered one of the five most important palaces in the world. The Palace Museum is a veritable storehouse ... Open »
Hong Kong
It’s a modern memorial built in 1993 in the form of a large seated statue of Buddha that is 34 metres high and weighs 250 tons. To get to the statue, you need to climb 268 steps. There’s a temple inside. The first floor decorated with paintings of the Buddha’s earthly life houses the Hall of Benevolent Merit. The second floor has a wooden panel depicting 160 pairs of eyes conveying different human emotions. The third floor houses the Hall ... Open »
OrangeSmile.com - online travel reservation expert providing reliable car rental and hotel booking services. We feature more than 25.000 destinations with 12.000 rental offices and 200.000 hotels worldwide.
Secure Server