Sightseeing in Bagan - what to see. Complete travel guide 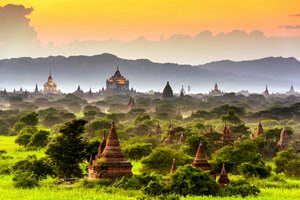 Long time ago, people founded a settlement and called it Bagan. This ancient city in Myanmar is also famous as “the city of a thousand temples”. It is a miracle that this historical site has survived until our days. In modern times, more and more tourists become interested in visiting Myanmar and Old Bagan. What are they searching for? This is an absolutely unique place with a magical atmosphere.
Excursion over cultural sights of Bagan - 'must visit' points of interest
Bagan is famous for its ancient temples and pagodas. Each historical monument is unique here. One of the most spectacular and amazing is Ananda Temple, the first mention of which dates back …

Open
Historians think that Bagan was founded in 850. This was a period of time full of bloody battles for the throne. The palace coups became so frequent that they turned into a real disaster for local people. Two centuries after the foundation of the city, Anawrahta became the king of the region. He was the founder of the Pagan Empire. Thanks to his reign, the empire was growing in size by conquering the adjacent territories. Anawrahta wanted to develop the Pagan Kingdom and make it superior to other kingdoms. For this purpose, he was inviting talented masters who were creating true masterpieces for the city.
When the king died, many kings were changing each other. The life in the city was changing as well. Bloody battles came to the prosperous land, bringing chaos and disorder. The Pagan Empire ceased to exist at the end of the 12th century. The country’s population decreased significantly, and many landmarks were destroyed in fire. Only magnificent old temples still stand as reminders of the past glory. A devastating earthquake happened in the region in 1975. It almost completely ruined the city. There were attempts to restore the temples in the 90s of the previous century, but these attempts caused even more harm. Copyright www.orangesmile.com
Your active city break in Bagan. Attractions, recreation and entertainment - best places to spend your day and night here
How to entertain yourself in a major pilgrimage center that is primarily famous for its religious sights? Even though most tourists come to Bagan to explore its historical sites, this is far …

Open
In Bagan, tourists can attend an incredibly interesting excursion for foreign guests – a tour to Phowintaung (or Po Win Taung). This is a Buddhist complex consisting of more than 900 caves. According to a legend, a medieval alchemist (mage) called Po Win lived in these caves. He knew the secret of turning any metal to gold and could make every wish come true with a simple swing of his magic wand. The labyrinth of caves is 25 kilometers long. Nowadays, visitors can participate in an exciting and very interesting quest in these caves. During the quest, the participants search for the Holy Grail manuscripts. In order to participate, visitors need to come at noon. When the time for pilgrims is over, tourists can play the quest game. 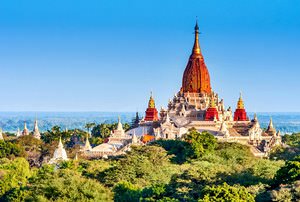 Some tourists might wonder whether there are still any landmarks in Bagan since the city was destroyed. This is a logical question. Despite the tragic events of the past, the city is still worth visiting. There are still thousands of stupas and temples that create a mystical atmosphere and add a secretive charm to the area. The ruins look quite gloomy, but no tourist feels down or depressed here. Local temples look very different from the usual buildings. They are nothing similar to oriental temples and western churches.
Shopping in Bagan - main shopping streets, outlets and boutiques
In Bagan, shopping enthusiasts should take a stroll through the colorful local markets where they can buy all kinds of interesting handicrafts. In the new town, you will find many …

Open
To admire a panorama of Bagan and enjoy some striking views, head to the viewing platform. It is hard to control excitement right from the moment when you start climbing up. While going up on sunlit steps, you will feel how tender sun embraces you. Having reached the top, you will have an opportunity to fly over the ancient city in a hot air balloon. 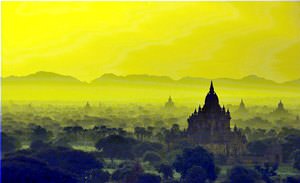 During the period of prosperity of the Pagan Kingdom, almost 4,500 Buddhist stupas, temples, and monasteries appeared in the Bagan plains. Many of them were destroyed, but it is still possible to see more than 3,800 of them. Moreover, some temples are in great condition. No wonder why Bagan is a UNESCO World Heritage Site. Here, tourists can see numerous stupas, the local name for pagodas or chedi. Perhaps, the Shwezigon Pagoda is the most notable temple in Bagan. This is a giant building with a golden cupola. The height of this stupa is 99 meters. Near the temple, there are smaller buildings that are older than the city. The Sulamani Temple was built in 1181. This building is a fabulous example of early and medieval Burmese architecture. The first style is reflected in flat horizontal objects. The second architectural style is clearly visible in vertical elements. This combination of details adds uniqueness to the building and makes the Sulamani Temple a must-see attraction for all tourists who visit Bagan. The inner décor is an elegant blend of carved ledges, attics, and walls with paintings. Talented craftsmen could restore the inner décor of the building, so tourists can see the exact temple that masters created centuries ago.
Excursion over cultural sights of Bagan - 'must visit' points of interest
Bagan is famous for its ancient temples and pagodas. Each historical monument is unique here. One of the most spectacular and amazing is Ananda Temple, the first mention of which dates back …

Open
Not all countries have a direct connection to Myanmar. It may be easier to fly to Bangkok, Kuala Lumpur or Singapore first and then take a flight to Yangon. It is easy to reach Bagan from Yangon. Tourists, who don’t want to make airplane rides, can reach Myanmar by land from Thailand. In this case, they will need to get a short-term Thai visa as well. There are regular bus rides from Yangon to Bagan. Mandalay also offers ship rides to Bagan, but the time in transit will be longer in this case – up to 12 hours.

This guide to iconic landmarks and sights of Bagan is protected by the copyright law. You can re-publish this content with mandatory attribution: direct and active hyperlink to www.orangesmile.com.
Bagan - guide chapters 1 2 3 4

Sights around Bagan from our guide 'Extreme places on Earth' 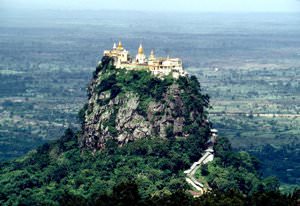 Distance from Bagan center - 46.3 km.
Originally, the staircase was roofed-in, but eventually the old roof has dilapidated and today some areas are completely open. The only thing that can save from falling into the abyss is fragile wooden railing. Another dangerous feature is a huge number of monkeys running around. Thus, you will need a lot of patience and caution to overcome the cherished 777 steps. Since ancient times, locals considered Taung Kalat mountain to be the sacred place and an abode of spirits, which were revered on par with Buddha. Most pilgrims visit the monastery during the festival of the full moon, Nayon. This religious festival is celebrated twice a year. … Read further

Mandalay is famous as the cultural center of the country. If you like exploring historic landmarks, you should definitely include a visit to this city in your plan. In this city, there are more than 700 beautiful pagodas built in different periods of time. The ancient royal city of Amarapura in the township of Mandalay has been transformed into a monastery. The Mahamuni Buddha Temple is located nearby. This is an important pilgrimage site for Buddhists from all over the world. In this temple, there is a unique statue of Buddha. According to one legend, Shakyamuni Buddha himself was present in the temple when the statue was built. … Open

Search touristic sites on the map of Bagan

Sightseeing in regions nearby Bagan

Mandalay
The Mandalay Palace consists of the main building with a tall gilded spire and several similarly looking wooden buildings on the perimeter. All buildings in the complex feature carved wooden décor, the beauty of which amazes even experienced foreign travelers. There is a museum in the central part of the complex. This museum exhibits the royal throne and bed and provides ... Open »
Bago-Pegu
This is a truly giant sculpture that is 55 meters long and 16 meters tall. The Shwethalyaung Buddha is the official name of the monument. Here is a simple example that may be helpful in understanding the size of the statue – the Buddha’s little finger is three meters long. The statue was damaged and was believed to be lost, but it was rediscovered later. During the ... Open »
Chiang Mai Region
Chiang Mai is located in the northern part of Thailand, its capital is the city of the same name. Chiang Mai is the second largest cultural center of the country after Bangkok. There is a wide number of fascinating historical sites there. The picturesque province with the colorful capitaland many charming towns attracts fans of excursion tourism. There are no beaches in the ... Open »
Chiang Mai
This is one of the largest cities of Thailand, which continues growing actively. The city's name can be read differently, but when translated from Thai it means "new castle". This ancient cultural center was built in the end of the XIII century and founded by king Mengrai. It is believed that Thailand attracts visitors primarily as a beach rest destination. However, this city ... Open »
Chiang Rai
Chiang Rai is famous for its vats (Buddhist temples). According to a legend once the Emerald Buddha statue has stood here. Later it has appeared in Bangkok. One of the local churches (Ngam Muang Hill) keeps the tomb with the remains of King Meng Rai. The nature of northern Thailand is also unique. Bright and rich colors of mountain sceneries surround the city and fascinate ... Open »
Dhaka
In the 30s of the 20th century, a decorative mosaic made from the finest Chinese porcelain was discovered in the mosque. The examination of the mosaic revealed a crescent and stars. Because of numerous renovations, the precious mosaic was hidden in the hall for prayers under numerous layers of paint and plaster. Nowadays, the gorgeous mosaic beautifully adorns the main ... Open »

All about Bagan, Myanmar-Burma - sightseeings, attractions, touristic spots, architecture, history, culture and cuisine. Prepare your trip together with OrangeSmile.com - find out the 'must see' things in Bagan, which places to visit, which excursions to take, where the breathtaking views are waiting for you. Planning your trip with this travel guide will help your to get the most out of Bagan in few days.