Sightseeing in Kathmandu - what to see. Complete travel guide 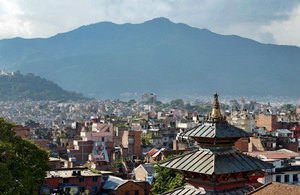 Kathmandu is not only a beautiful city but also the capital of Nepal. It is situated in the valley with the same name. Without a doubt, Kathmandu is the historical, economic, political, and cultural center of the country. This is a vibrant city that is equally active during the daytime and at night. All local people are incredibly hospitable and often try to sell something to tourists. There are many Buddhist and Hindu temples in Kathmandu. All of them are different in size, so there are large shrines and small street altars that are installed among residential buildings. As local people say, more than ten million gods live in their home city.
According to scientists, humans lived in the area of modern Kathmandu already in 2,000 BC. We can learn more about the past of this region from numerous myths and legends. First mentions of Kathmandu in historic records date back to the 4th century when the Licchavis came to this land to establish their dynasty here. They became the rulers of the settlement. The first Buddhist monastery appeared in the area approximately at the same time. It got its name after the valley. The city of Kathmandu was established in 723. At that time, it was the main transit stop between India and Tibet. The city started developing and inviting local painters to decorate numerous temples.
The entire valley became the territory of the Gorkha Kingdom in 1768, and Kathmandu became its capital. This is when the first Nepalese style buildings appeared in the city. Many of them have survived until modern days. The kingdom was developing as well, establishing business ties with other countries. At the beginning of the 19th century, Kathmandu got modern fortifications. That being said, the period in the mid-19th century, during the reign of Jung Bahadur Rana, was the time of true prosperity and development of the city. For many local people, Rana was a cruel tyrant but the ruler did so much for the infrastructure of Kathmandu. Copyright www.orangesmile.com
Swayambhunath, a famous stupa at the outskirts of the city, is the most popular religious landmark in Kathmandu. Several Tibet monasteries surround the stupa. These monasteries have schools, each of which has its own way of teaching how to be a harmonious personality. As there is also a Hindu shrine nearby, followers of this religion also regularly visit Swayambhunath. 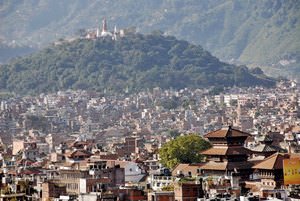 In order to get to the stupa, tourists need to walk three hundred and sixty-five steps. Doesn’t this number sound familiar? This is exactly the number of days in a calendar year. While going up the stairs, people need to think of their actions during the last year. There are many monkeys in this stupa became monks feed them. That is the reason why Swayambhunath is sometimes referred to as “the Monkey Temple”. If you are physically strong enough to reach the top, you will notice a symbol on the stupa – Buddha’s eyes. This symbol is very old, and many believe that it has healing power.
The Garden of Dreams is one more popular landmark in Kathmandu. It occupies almost seven hectares of the urban territory. Are you fond of romantic places? If the answer is yes, you will deeply enjoy a visit to this garden because it has an unforgettable atmosphere of love and romance. Don’t be surprised to see sleeping people in the garden. Simply recall its name. The opening of the Garden of Dreams took place in the 20s of the previous century, during the reign of the Rana dynasty. 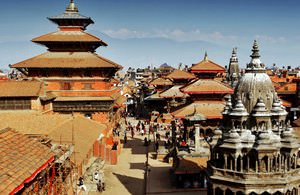 The garden’s territory is conventionally divided into four parts, each of which symbolizes a particular time of the year. This unique style is the result of a sophisticated irrigation system and the hard and restless work of numerous gardeners. Having visited the Garden of Dreams, you will feel a special atmosphere of this place that fills the hearts of visitors with happiness, peace, and harmony. Numerous artists and poets visit this place to find inspiration, and locals together with guests of Kathmandu enjoy taking a stroll on the parkways in order to indulge themselves in the enchanting magic of this place.
As a rule, tourists enjoy visiting one more attraction in Kathmandu – the National Museum opened in the 30s of the 20th century. This museum has a structure that is different from typical museums. The National Museum consists of three buildings, namely, the Art Museum, the Buddhist Gallery, and the Museum of Natural History. It exhibits a large collection of weapons of different epochs, ancient coins, archaeological findings, and deities of Buddhists and Hindus. 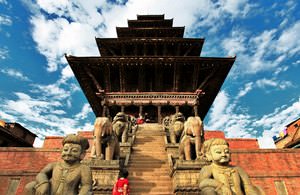 To get to the capital of Nepal, you need to fly to Delhi first. Upon arrival to this city, make a change to the airplane to Kathmandu. The journey time can be up to one day. A bus ride from Delhi to Kathmandu lasts thirty-five hours. If you plan to travel by train, you need to be prepared for a long and hard journey with numerous changes: first, you need to reach Gorakhpur, after that take a bus to Sonauli, and then head to Kathmandu.
This guide to iconic landmarks and sights of Kathmandu is protected by the copyright law. You can re-publish this content with mandatory attribution: direct and active hyperlink to www.orangesmile.com.

City tours, excursions and tickets in Kathmandu and surroundings

Shopping streets in Kathmandu
♥   Shopping area ' Durbar Marg' Kathmandu, 1.4 km from the center. On the map

National and city parks around Kathmandu
♥   National Park 'Valmiki' , 122.3 km from the center. On the map

Sights around Kathmandu from our guide 'Extreme places on Earth' 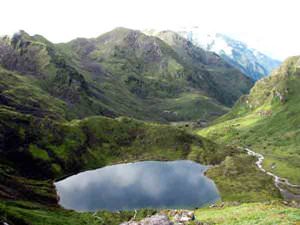 Distance from Kathmandu center - 52.9 km.
A must for many excursion programs is to visit the local villages, where you can get acquainted with the culture and the everyday life of the thoroughgoing population. Ecotourism enthusiasts prefer the trails that are laid out in the least explored districts. There are a lot of variations of the ascent to the Panch Pokhari lakes. Regardless of the chosen route, an interesting explanation will be given during the excursion for why the Hindus consider the high mountain lakes to be sacred. … Read further

The easiest way to reach Nepal is from India. These countries have had warm and friendly relations for years. The countries have so well-developed connections that residents of India and Nepal freely cross the border between the countries on foot. Foreign guests can do the same but they need to go through the customs control. If you do not want to walk, then Indian airlines have regular flights to Nepal. The majority of them depart from Delhi airport. … Open

Search touristic sites on the map of Kathmandu

Sightseeing in regions nearby Kathmandu

Patan
A large part of the exhibition is dedicated to works of local masters. There are many hammered works made of bronze or gilded copper. After a long walk in the exhibition halls, it is incredibly pleasant to sit in a local café or visit a souvenir shop where the museum’s visitors can purchase traditional jewelry and other sacred items that will remind them of their vacation ... Open »
Bhaktapur
Dattatraya Square is one more important tourist attraction. The square got its name after a temple that is located here. The Dattatraya Temple is an old building that was restored a number of times. The sacred building was constructed in 1427 to honor three gods, namely, Shiva, Brahma, and Vishnu. The wooden temple displays symbols of the gods. There is one more scared ... Open »
Darjeeling
After your arrival in Delhi, you can take a train that heads to Kolkata. The journey time can vary from 10 to 36 hours. Upon reaching Kolkata, you will have to take a bus that goes to Darjeeling, to Siliguri to be precise. From Siliguri, tourists usually hire a car that takes them to Darjeeling. It is also possible to buy tickets for an excursion train to Darjeeling, but its ... Open »
Lucknow
At the beginning of 1856, the East India Company annexed Awadh and exiled its leader to Kolkata. Birjis Qadra, who was yet a teenager at that time, became the new leader and his mother Begum Hazrat Mahal became the regent queen. To stop the Indian Rebellion, the British Empire sent a big army to Lucknow. This was a tragic period in the history of the Indian nation because the ... Open »
Lhasa
In 1705, Lha-bzang Khan, the ruler of the Khoshut tribe, conquered the Tibetan capital. After that, the city’s residents asked the Choros clan to help them. The Dzungar ruler sent an army of 7,000 cavalries led by Tsering Dondup to defeat the invader. Lha-bzang Khan’s army was defeated during the battle, and the winner took over the city. In 1951, monks were the main ... Open »
Kolkata
The city’s airport is situated twenty kilometers from central Kolkata. This airport serves flights of many international carriers. Having landed at the airport, tourists can always call a taxi to the city center. There is also a new railroad that connects the airport to Kolkata downtown. If you plan to get to Kolkata from India’s capital, you can always get on a train ... Open »

All about Kathmandu, Nepal - sightseeings, attractions, touristic spots, architecture, history, culture and cuisine. Prepare your trip together with OrangeSmile.com - find out the 'must see' things in Kathmandu, which places to visit, which excursions to take, where the breathtaking views are waiting for you. Planning your trip with this travel guide will help your to get the most out of Kathmandu in few days.