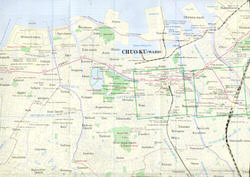 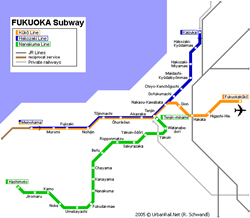 Interactive maps of hiking and biking routes around Fukuoka

1. You can zoom in/out using your mouse wheel, as well as move the map of Fukuoka with your mouse.
2. This interactive map presents two modes: 'Biking Routes' and 'Hiking Routes'. Use the '+' button on the map to switch between them.

This Fukuoka map has two modes: 'Railway Network' and 'Landscape & Rural Map'. Use the '+' button on the map to navigate.

On July 7th, Tanabata known as the Star Festival is held in Japan. According to legend, it was on this night that the deities Orihime and Hikoboshi (represented by the Weaver Stars (Vega) and Cowherd Star (Altair)) who were previously separated by the Milky Way meet just once a year. The Japanese write down their wishes on paper tapes which they subsequently tie around the stems of wild bamboo. The Buddhist Obon Festival is a three-day celebration (August 13-15) dedicated to the commemoration of the dead. The Japanese believe that on these nights, the souls of the dead come to visit the living. During this time, festive services are held in temples. Refreshments are exhibited at the home altars and lights are lit at the entrances to the houses. They believe that by doing this, the soul can go to their light. In the evenings, traditional ritual dances are held in the Parks. The end of the holiday is marked with a ceremony of floating lanterns when a lot of paper lanterns with candles inside float on the water to lead the souls of the deceased back to the realm of the dead. … Open

Our guide to Fukuoka

A protective wall, which reminds of the militant past, is surely one of main attractions of this place. The ruins of the wall are located in the western part of the city. The wall is made of huge blocks of stone and it has survived in many battles. The main reason for building this wall was in frequent raids of the Mongols to the ancient city. In the central district of the city named Hakata is the location of … Open

Among the most visited cultural institutions remains Hakata Machiya Folk Museum acquainting visitors with features of handicraft and national traditions. Among its exhibits there are hundreds of unique handicrafts, traditional costumes and jewelry, musical instruments and other items that were used during national holidays and festivals. One of the major attractions is located in the picturesque Higashi Koen park. … Open

Tourists with children like to relax in the Fukuoka Botanical Garden, as its territory is equipped with great playgrounds and recreation areas. The local Marine World aquarium is also great for families; every day it is visited by hundreds of guests eager to watch the spectacular dolphin show. Aquarium is located in the coastal zone, so many fun activities for guests are held on the beach. Among the inhabitants of … Open

A huge selection of the tenderest noodles with spicy sauces is offered by the national restaurant Hakata Ippudo. Aforementioned ramen noodles with pork broth are also served here; this popular dish is prepared in full compliance with the classic recipe. The popular dining place is the colorful restaurant Chikae; it is perfect for families with children. Visitors are offered a huge selection of seafood including … Open

Traditions and mentality of Fukuoka

Celebration begins with a parade taking place on the main avenue of the city. Lots of children are usually involved in the solemn procession that makes the holiday even more touching and sincere. Matsubayashi performances, in which participate about 10,000 people, have become traditional for the holiday. It looks simply mesmerizing; all the performers wear beautiful national costumes and all performances are … Open

In Fukuoka, there is an excellent botanical garden, which forms a single complex with a nearby zoo. They were founded simultaneously in 1953. The gardens have lived through many difficult periods over the years. In recent decades, many measures have been taken to restore them. Today, the greenhouse located in the botanical garden is the largest in the country. It contains about 1200 plant species. The same number of … Open