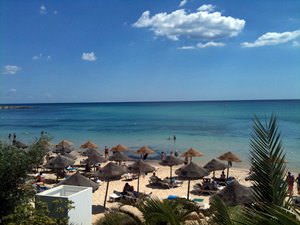 Hammamet is considered the most picturesque resort in the country. Its most distinguishing feature is its unique nature. The main historical attraction of the city is the Medina of Hammamet; it is an incredibly beautiful complex of old buildings. The Medina is 300 meters long and 100 meters wide; you can get to it through one of the four gates.
Guide to Hammamet sightseeing - things to see and to visit
One of the oldest tourist centers of Tunisia, this city was founded more than five centuries ago. It began attracting travelers actively in the beginning of the 20th century. The city's name …

Open
In the center there is the Great Mosque of Medina, the most beautiful and interesting religious attraction of Hammamet. There is also a colorful market here; a walk through it will be a real journey into the past. Within the walls of the Medina there is an interesting Museum of clothing; its collection covers quite a long historical period. A significant part of the Medina is occupied by Kasbah fortress; its history is very interesting. The fortress has repeatedly saved the town from invaders and has witnessed a number of famous historical events.
Close to the Medina there is another important historical site, the tomb of Sidi Bou Hadid. Like many historic buildings, the tomb is fully restored; today it houses a popular restaurant. Among the architectural landmarks of Hammamet, George Sebastian Villa stands out. Built in the early 20th century, it is characterized by an incredibly beautiful style; holidaymakers have an opportunity to stroll through the old mansion and admire its elegant interior. It is decorated with picturesque Roman mirrors, antique furniture and works of art. Copyright www.orangesmile.com
Cuisine of Hammamet for gourmet with top restaurants and cafe
Hammamet would surprise its guests with a variety of dining places; all popular culinary traditions are represented at the resort. The Le Barberousse restaurant is known far outside the …

Open
Next to it there is the beautiful garden with centuries-old cypress trees. There is also the old pool surrounded by tall pillars and the Roman theater that became the permanent venue for the annual International Festival of Arts. Two ancient cemeteries, French and Islamic, are located to the east of Medina; they are of interest mainly from the architectural point of view. 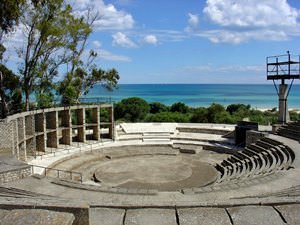 In the immediate vicinity to Hammamet there is a site, which is sure to interest fans of historic sites. We are talking about the Pupput Roman Site, the predecessor of modern Hammamet. There are numerous religious sites and ancient buildings, each of which has its own unique history.

This guide to cultural sights Hammamet is protected by the copyright law. You can re-publish this content with mandatory attribution: direct and active hyperlink to www.orangesmile.com.
Hammamet - guide chapters 1 2 3 4 5 6
Car rental on OrangeSmile.com

Photogallery of cultural heritage of Hammamet

Excursions over cultural sights of neighbours of Hammamet

Sousse
In the western part of the city Sousse Catacombs are situated. They have been found long ago, in 1888. According to scientists, a complex of caves was built no later than the 4th century and served as the pagan necropolis. According to rough estimates, there are not less than 15,000 tombs in the dungeon. During excavation archaeologists have found of a number of unique ... Open »
Monastir
Medina is the city’s most interesting district for walks. There are interesting old constructions—some of which are over a thousand years old—everywhere here. The largest and most colourful market in the city is situated in the historic district. Here you can find souvenir and craft stalls as well as the city’s best traditional cuisine restaurants. The historic ... Open »
Aegadian Islands
It is not surprising that locals live with parents up to thirty. The thing is that it is customed in Italy to indulge children even if they are adults. So, children love their parents and they are not eager to start adult life. Furthermore, divorce is a complicated and long process. It can last up to 7 years. The court can also oblige a man to support his ex-wife even if they ... Open »
Favignana Island
Every person can visit the fortress for free. You can explore its full area: from the upper terrace to the underground prison. But you should be careful, the construction doesn’t have safe ladders and there are no fences on the upper observation decks. You can see not only the preserved rooms and corridors with the remains of antique furniture, doors and windows inside the ... Open »
Trapani
Santuario Dell Anunziata remains the main historical symbol of Trapani. It is also famous under the following names: the Basilica-Sanctuary of Maria Santissima Annunziata or just “Madonna of Trapani”. The building of the first church on the site of the basilica started in 1315, but the church was ready only in 1332. The modern basilica is a harmonious combination of ... Open »
Agrigento
Chiesa Santa Maria dei Greci is a prominent landmark in Greek-Byzantine style. The construction of the shrine took place in the 13th century. Chiesa Santa Maria dei Greci was built on ruins of an ancient temple. The church hasn’t got any significant damages over the centuries, so it still features many interesting elements in the Gothic style. Magnificent frescos are the ... Open »

Culture guide to Hammamet. Which fascinating sights to visit once you are in Hammamet: temples, churches, museums, theaters and castles. Recommendations (with addresses, phone numbers and links) on the places 'must visit' in Hammamet. Plan your own city excursion by using this page info!