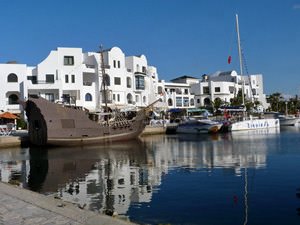 One of the most attractive sites for travelers is the old fortress, the walls of which are now housing the Archaeological Museum. Its collection is striking with its diversity; it is one of the most exciting and largest in the country. The museum is divided into several thematic areas. Among its exhibits there are antique statues and tombstones dating back more than a thousand years, mosaics and frescoes, religious attributes and objects of art. The Archaeological Museum is the most visited cultural venue of Sousse and the priority landmark of all sightseeing programs.
Guide to Sousse sightseeing - things to see and to visit
This is a famous Mediterranean resort, which is considered an ideal vacation spot for young people. The city is famous for its numerous discotheques, night clubs and bars that can be found …

Open
The most important religious object is the Grande Mosque built in 851. Recently, a large-scale reconstruction of the mosque took place, due to which the shrine managed to find its original appearance. The majestic building has not only an attractive appearance, but also unique atmosphere of solemnity and peace. A curious object with a long history is the Kasbah of Sousse fortress. According to historical records, it was built in the second half of the 9th century on the site of ancient fortifications. The height of the main tower of the fortress is 30 meters. Its top is equipped with a beautiful viewing platform. It is notable that the main tower of the fortress is still acting as a lighthouse as many hundreds of years ago.
In the western part of the city Sousse Catacombs are situated. They have been found long ago, in 1888. According to scientists, a complex of caves was built no later than the 4th century and served as the pagan necropolis. According to rough estimates, there are not less than 15,000 tombs in the dungeon. During excavation archaeologists have found of a number of unique artifacts in catacombs. After fortification works in the dungeon, the part of catacombs was made available to the public. Copyright www.orangesmile.com
Cuisine of Sousse for gourmet with top restaurants and cafe
Among many dining places of Sousse each and every guest could choose something special. An interesting restaurant is the Queen. Its menu is a harmonious blend of popular Arabic and French …

Open
Another unusual attraction is the underground cisterns of La Soffra, a monument of the Roman Empire. Their volume is about three thousand cubic meters, which makes the old structure even more unique. Nearby is a miniature Mosquee Bou Ftata occupying area of ​​only 8 square meters. It is believed that this mosque and the Grande Mosque were built by the same architect.

This guide to cultural sights Sousse is protected by the copyright law. You can re-publish this content with mandatory attribution: direct and active hyperlink to www.orangesmile.com.
Sousse - guide chapters 1 2 3 4 5 6
Car rental on OrangeSmile.com

Photogallery of cultural heritage of Sousse

Excursions over cultural sights of neighbours of Sousse

Monastir
Medina is the city’s most interesting district for walks. There are interesting old constructions—some of which are over a thousand years old—everywhere here. The largest and most colourful market in the city is situated in the historic district. Here you can find souvenir and craft stalls as well as the city’s best traditional cuisine restaurants. The historic ... Open »
Hammamet
Hammamet is considered the most picturesque resort in the country. Its most distinguishing feature is its unique nature. The main historical attraction of the city is the Medina of Hammamet; it is an incredibly beautiful complex of old buildings. The Medina is 300 meters long and 100 meters wide; you can get to it through one of the four gates. In the center there is the ... Open »
Djerba Island
Also, Djerba Explore – also known as Djerba Heritage – is a must see! You can not only a crocodile farm there but a true traditional Tunisian village too. Scientists had scrupulously restored all the buildings including the accurate reproduction of the interior. In addition, a water-collecting camel can be considered as an all-sufficient sight. Lalla Hadria Museum is ... Open »
Aegadian Islands
Italians easily get along with foreigners. They talk not only about politics, sport and weather but discuss everything. Sometimes these relationships become friendships. There is a joke that locals prefer to be friends with foreigners because they live far away and you don’t have to help them with a job or domestic affairs. Family is very important for Italian people. ... Open »
Favignana Island
One more important attraction on Favignava is the castle of Santa Caterina. The castle is located on the peak of Mount Santa Caterina. Its peak is 310 meters high and it provides amazing views of the island. The Castle was built in the 10th century by Saracens and it was besieged and destroyed several times. Later, the Saracens left the castle and new owners decided to expand ... Open »
Trapani
Santuario Dell Anunziata remains the main historical symbol of Trapani. It is also famous under the following names: the Basilica-Sanctuary of Maria Santissima Annunziata or just “Madonna of Trapani”. The building of the first church on the site of the basilica started in 1315, but the church was ready only in 1332. The modern basilica is a harmonious combination of ... Open »

Culture guide to Sousse. Which fascinating sights to visit once you are in Sousse: temples, churches, museums, theaters and castles. Recommendations (with addresses, phone numbers and links) on the places 'must visit' in Sousse. Plan your own city excursion by using this page info!