Sightseeing in Djerba Island - what to see. Complete travel guide 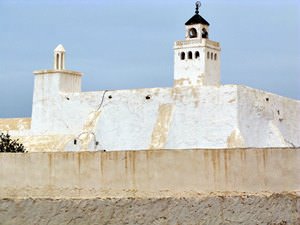 Mysterious island of Djerba is the southmost and the hottest sea resort of Tunisia. It’s famous to tourists because of its beautiful beaches and luxurious hotels, as well as its excellent thalassotherapy centers and numerous landmarks. Guests of Djerba have a unique opportunity to combine beach leisure with healthcare procedures and walking across historical areas. Djerba is also an excellent choice for active leisure.
Family holidays with kids in Djerba Island. How to entertain your child, things to show to children.
Every child would find out something new and extraordinarily interesting on Djerba Island. For instance, your children and you can go on a journey on a «pirate ship» with your own …

fortress is located next to the city. For many years, it has being used to protect island from invaders. It has been built back in 13th century, when Normans have been island's main enemies. Turks were first to conquer this unwinnable fortress in 16th century. It was re-build in Medieval times, but most of fortress original elements survived until this day. Copyright www.orangesmile.com
Cuisine of Djerba Island for gourmet with top restaurants and cafe
Having meals here on Djerba Island is as important as, for instance, working or spending time with one’s family. Suffice it to say, no self-respecting Tunisian would dare eating …

Open
Another important landmark is Borj el-Rous tower situated near the fortress. It has very interesting history: tower was built by the order of Turkish admiral Dragut in celebration of his victory over Spain. The tower was built with the bones of fallen Spanish soldiers. The building survived until 19th century and then was replaced with memorial dedicated to the victims of this bloody battle. Remnants of Spanish soldiers were buried at the nearby Christian cemetery. 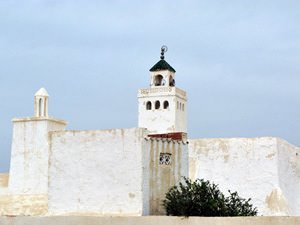 Hara El K'bira is one of the oldest buildings of Djerba. According to scientists, it’s about 2,500 years old; it was built in pre-historic time. It’s worth mentioning that the synagogue is still working to its purpose.
Authentic traditions, festivals and lifestyle of Djerba Island inhabitants
Planning a trip to Djerba Island, remember that the majority of the local population is Muslim. Islam is the state religion here, so people here pay a church tax along with other ones. Even …

complex is the main cultural object of the island. It’s located in the eastern part of Djerba; it houses exciting Lalla Hadria Museum

museum offers its guests an excellent opportunity to visit a traditional local village, take a look inside an unusual building of islanders and explore their daily life. Some of houses feature fully reconstructed interior of the past; there's also pottery at the museum offering national souvenirs. 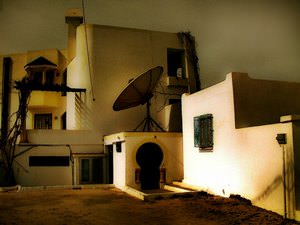 The most unusual landmark of Djerba is the Crocodile Farm. Over 400 crocodiles, including very rare ones, live there. Tourists who prefer less thrilling adventures are recommended to visit scenic Guellala

Open
Djerba is distinguished by a variety of shops and colorful markets. This is a great place to purchase popular Tunis souvenirs and various exclusive items made by local masters. Travelers wishing to buy something exclusive and expensive should take a look at luxurious locally manufactured carpets. All carpets are handmade, and a master can spend several years creating intricate patterns. Shisha, as well as other accessories for smoking, also remains a very popular souvenir. 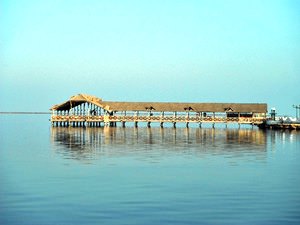 Adherents of a healthy lifestyle will like handmade leather items. They will be pleased with a variety of handbags, wallets, belts, leather shoes and slippers, and many other items in the national style. Dolls dressed in colorful national costumes are also charming and popular souvenirs. Females simply cannot fail to buy gorgeous silver jewelry with precious and semiprecious stones. Affordable prices in local shops will make it virtually impossible to resist buying something. The town of Guellala is home to historical workshops that make excellent ceramics.

This guide to iconic landmarks and sights of Djerba Island is protected by the copyright law. You can re-publish this content with mandatory attribution: direct and active hyperlink to www.orangesmile.com.
Djerba Island - guide chapters 1 2 3 4 5 6 7 8

The capital of the country, Tunis, is also home to magnificent architectural places of interest that belong to the 16th - 18th centuries: the Grand Mosque, Dar Ben Abdallah and Dar el Bey palaces, and the Mausoleum of Aziza Othmana. The city is famous for its spacious bazaars, where guests can not only buy interesting items and souvenirs, but also see performances of local musicians and dancers. When describing cultural places of attraction in the city, we cannot fail to mention Bardo Museum that exhibits a rare collection of Roman mosaics. Don't forget to visit the city of Dougga - this ancient city has become a major tourist attraction thanks to numerous buildings of the Roman Empire period. Theatre remains the most spectacular landmark of the area. According to calculations of archaeologists, the theatre could sit as many as three thousand viewers. The Mausoleum of Atban and Capitol are located not far away. These buildings were constructed in the 2nd - 3rd centuries. … Open

Search touristic sites on the map of Djerba Island

Sightseeing in regions nearby Djerba Island

Monastir
The largest sports center, where you can undergo scuba diving classes, is located near the port. Here you can also participate in the marine ride on a yacht. Golf lovers should definitely visit the new field, which was opened a couple of years ago. There is also a hippodrome for those visitors, who want to try horse riding. When it comes to describing the historical sights ... Open »
Sousse
The local water park located in Port El Kantaoui has quickly become one of the favorite places among visitors. Numerous water slides, pools and breathtaking rides will be genuinely enjoyed by both adults and children. Soula Center is considered the most popular shopping complex of the country. An interesting fact - all prices in this shopping center are fixed, so customers do ... Open »
Hammamet
Travelers will be particularly interested in visiting the old part of the city as one of the main attractions is located here. This is Fort Medina that looks like a luxurious oriental palace. The Old Town is the location of beautiful oriental bazaars where you can buy jewelry, beautiful fabrics and souvenirs. You will also see numerous restaurants near the market square. They ... Open »
Tunis
The majority of historic buildings here are also significant religious landmarks. Among the most notable places of interest of the region are the Great Mosque and Habib Bourguiba Mausoleum, which were built in the 10th century. Like the majority of ancient religious buildings, they are distinguished by luxurious design and elegant interior. Here visitors will see beautiful ... Open »
Mgarr
Besides beach recreation and admiration of the local underwater world, guests of Gozo Island can always explore local attractions, many of which are very old. One of them, the Ta’ Hagrat Temple Complex, is located not far from the town of Mgarr. This is not just another old temple but one of the oldest religious sites on Earth. The temple complex consists of two main parts. ... Open »
Mellieha
Golden Bay Beach is another popular coastal area in Mellieha. It is located in the northern part of the island. This beach is smaller than Ghadira Bay but tourists enjoy spending their free time here. Golden Bay Beach has one more peculiarity – its sand has a dark shade. Naturally, this doesn’t make recreation here less comfortable. It is still very comfortable to ... Open »

All about Djerba Island, Tunisia - sightseeings, attractions, touristic spots, architecture, history, culture and cuisine. Prepare your trip together with OrangeSmile.com - find out the 'must see' things in Djerba Island, which places to visit, which excursions to take, where the breathtaking views are waiting for you. Planning your trip with this travel guide will help your to get the most out of Djerba Island in few days.