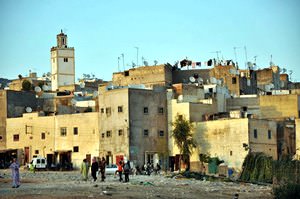 (Arabic for Old Fez), the oldest district of the city. It presents hundreds of religious buildings, several museums, and a countless number of shopping pavilions, the visits to which are often successfully combined with city tours by tourists. The second medina, Fes el-Jdid

, is also full of interesting sites to explore. Sightseeing fans will surely like the so-called New Fez - the youngest part of the city. Andalusian Mosque stands out among the hundreds of religious sites in Fez. Built in 1321, it is considered to be one of the most beautiful in the city. Its minaret is painted in white and green tones and is distinguished by an impressive height. The mosque is also notable for its rich interior decoration.
Cuisine of Fes for gourmet with top restaurants and cafe
The cuisine of Morocco is considered one of the most amazing in the world. The old local traditions of cooking were supplemented for centuries with finds from other countries, whose …

Open
In Fez, there is the oldest educational institution in the world - the University of Al Quaraouiyine (University Al-Karaouine) founded in 859. Interestingly, the founder of the university was a woman - Fatima al-Fihri. Today, the university is the most prestigious in the country, many prominent Moroccan politicians have left its walls. Travelers are primarily interested in visiting the university's eponymous Al-Qarawiyyin Mosque (Mosque Al-Karaouine), which is the largest in North Africa. It can accommodate over 20,000 parishioners at one time. The mosque houses one of the most significant religious objects of Fez - the tomb of Idris II, the founder of the city.
Another important symbol of the Morrocan city is the Bab Bou Jeloud Gate that serves as the main entrance to the medina of Fes el-Bali. The landmark built relatively recently, at the beginning of the 20th century, is among the city's most beautiful architectural structures. Painted in white-blue colors, it is decorated with rich ornaments and is the newest city gate. Copyright www.orangesmile.com
Authentic traditions, festivals and lifestyle of Fes inhabitants
If you are going to Fez, you should understand that Morocco is a Muslim country. Almost 99% of the population professes Islam in the city. All religious holidays are celebrated on a much …

). It is named after its founder, Sultan Abou Inan. Since its foundation in the 14th century, the madrasa has remained the largest in the city. The madrasa is open to the public - everyone can walk along its picturesque courtyard and appreciate its rich decoration, and followers of Islam have the great opportunity to visit a prayer hall. 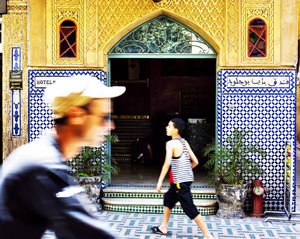 The list of unique monuments of Fes' architecture worth noting is not complete without Maison de FHorloge Dar el-Magane. The main decoration of its facade is a unique water clock, the mechanism of which has been a mystery for scientists for more than six hundred years. That is why the clock could not be repaired over the last two centuries. Nevertheless, every day thousands of tourists come to admire the "miracle" of medieval technology.
Your active city break in Fes. Attractions, recreation and entertainment - best places to spend your day and night here
Fez's guests can successfully combine sightseeing with walking through its picturesque gardens and visiting chic shopping malls. Lovers of a calm and measured rest will surely find this …

Open
Get acquainted with one of the oldest national crafts during a walk around the Tanneurs Quarter (Quartier Tanneeurs), which is a concentration of ancient tanneries, craft workshops, and trade pavilions. It is home to hereditary tanners who pass on their skills by inheritance and do not cease to improve the main national craft. 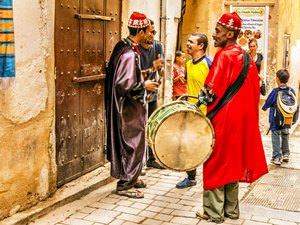 ). The museum with its exposition dedicated to Moroccan art is lucky enough to occupy a luxurious Moorish-style palace dating back to the 19th century. Within its walls is a rich collection of ceramics, handmade carpets, and ancient paintings. After watching the unique exhibits, be sure to stroll through a picturesque garden surrounding the palace, as it is considered to be one of the most beautiful in the city.

In the section below, you can get one of our excursion, activities or city discovery tours over Fes and surroundings. Our website offers 10-30% lower ticket prices, when compared to the offline purchase on the spot.

City tours, excursions and tickets in Fes and surroundings

This guide to cultural sights Fes is protected by the copyright law. You can re-publish this content with mandatory attribution: direct and active hyperlink to www.orangesmile.com.
Fes - guide chapters 1 2 3 4 5 6 7 8
Car rental on OrangeSmile.com

Photogallery of cultural heritage of Fes

Excursions over cultural sights of neighbours of Fes

Gibraltar
Gibraltar is rich in a wide variety of attractions, there are unique natural sites, beautiful architectural monuments, and many museums in the city and its surroundings. The main local landmark is a complex of fortifications, the construction of which on the territory of Gibraltar started in the 9th century. Fortifications that travelers can see today date back to the 13th-19th ... Open »
Casablanca
Beautiful mosques and palaces, ancient streets with lots of interesting buildings and craft shops, a picturesque coastline and colorful markets – these are the main attractions of Casablanca. This place is really beautiful, and this is the reason why the ancient Moroccan city is liked by thousands of tourists from all over the world. The Palace of Mohammed V is an ... Open »
Marbella
An ancient residence being owned by the viceroy a few centuries ago is the same significant landmark. This unique architectural landmark is executed in Gothic style and is decorated in keeping with the best traditions of the Renaissance style. The most significant religious landmark is considered to be the Church of Santa Maria de la Encarnacion. It was built in the 17th ... Open »
Benalmádena
In Benalmadena, you will find historic landmarks of different epochs. The town still has fragments of the medieval protective constructions. Gorgeous watchtowers Torre Muelle, Torre Bermeja, and Torre Quebrada are among the most spectacular sights of the region. These towers were built in the 15th century. For many years, they protected the coastline from invasions. After ... Open »
Malaga
Among other religious landmarks the Iglesia de los Martires church of the middle of the 19th century is worth noticing. Its spacious hall is decorated in baroque style and makes freeze in amazement all the visitors of the church. The Church of Santiago (Iglesia de Santiago Church) of the 15th century witnessed the ceremony of baptism of Pablo Picasso. It also features ... Open »
Nerja
A spacious observation platform is of great popularity among city guests as it offers a vibrant view over the scenic coast. A few centuries ago a massive fortifying construction stood on this place. The fortress was built by Arab people. Later on the fortress was totally destroyed and a gun battery platform was set on its place. In 1812 during the war against England the ... Open »

Culture guide to Fes. Which fascinating sights to visit once you are in Fes: temples, churches, museums, theaters and castles. Recommendations (with addresses, phone numbers and links) on the places 'must visit' in Fes. Plan your own city excursion by using this page info!