Map of cities in Egypt 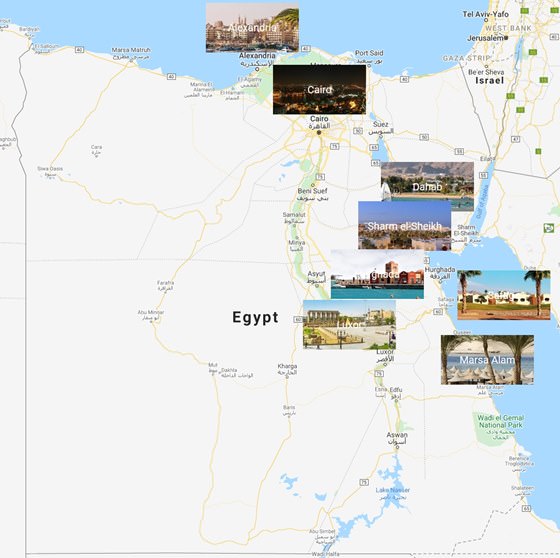 Map of cities and regions in Egypt 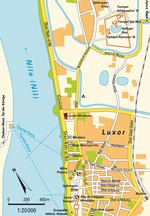 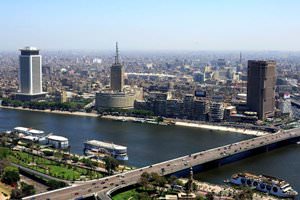 In Cairo is the bridge of 6 October with the length of 20.5 km. This bridge crosses the Nile twice and connects the western part of the city to the international airport, which is located in the eastern part of Cairo. The bridge was named to honor the important historical event. On 6 October 1973, the Ramadan war between Egypt and Israel began. The bridge building started in Cairo in 1969 and lasted a little over 30 years. In 1996 the bridge was put into operation.

Since the opening, the bridge of 6 October has been the most important street of the capital, but also of the whole state. Every day driving more than 500,000 people cross the bridge, which is also the number of guests from other countries. With care that traffic on the bridge is very dense at any time of the day, the trip … Read all 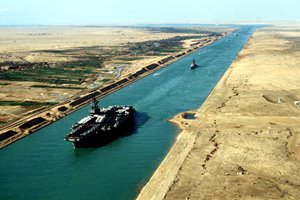 The most famous and recognizable one on the planet is the Suez Canal that connects the Red Sea to the Mediterranean Sea. The unique geographical location between Africa and Eurasia gives the canal the priority of being an important transport junction and one of the outstanding global sights. The canal is 163 km long and 60 metres wide, its depth is approximately 20 metres.

The passing vessels spend at least 14 hours to bridge the distance. About 50 units of water transport transit the waterway. The Suez Canal was opened for navigation in 1869. It has no shipping locks. The Canal is an important link between two major harbour cities of Suez and Said, which are also trading and travel centres of great importance. The idea of ​​establishing a grand canal dates back to the oldest times, … Read all
All unique sightseeing Egypt

Architecture of Egypt in pictures

Culture of regions in Egypt

Cairo
Cairo offers its visitors to attend various sightseeing objects. Among memorable places of the city travellers will find numerous colorful markets and ancient religious buildings, historic sites, museums, art galleries and unique natural reserves. Birqash Camel Market is traditionally very popular among vacationers. The market is located in Cairo suburbs, in a place called Birkash. The market is a huge field, on which hundreds of camels are sold. These animals are the main product of the market. … Read more

Hurghada
Hurghada offers many interesting landmarks to visit; the most attractive tourist object remains the Karnak temple. The name of the attractions can be misleading. The fact is that church in this case means a large-scale architectural complex of 1,500 by 700 meters. The temple is dedicated to the god Amun; its construction has being held for one and a half thousand years. Each Pharaoh tried to enrich it with new buildings and rebuild old ones. Sightseeing here would take more than one day. The … Read more

Alexandria
Stanley Bridge slightly contrasts with the historic buildings. It was built in a modern style, however, in spite of this fact, it is still considered to be a prominent architectural landmark which is definitely worth visiting. Known for its unique appearance, lovers have for long set their hearts on it because it is one of the most romantic places in the city. That said, one must go and visit the Corniche at least in order to enjoy the best views of the sea. This is one of the longest quays in … Read more

Sinai
South Sinai is a cult place. One of the main attractions here is Saint Catherine’s Monastery. The monastery was built in the 4th century AD and it is one of the oldest monasteries in the world. It is located at the foot of Mount Sinai, where, according to a legend, Moses received the Ten Commandments. Since its building, the monastery has never been destroyed and has never been left. Monks still live in its building. The monastery just changed its name. It was called the Monastery of … Read more