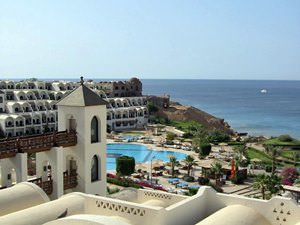 South Sinai is a cult place. One of the main attractions here is Saint Catherine’s Monastery. The monastery was built in the 4th century AD and it is one of the oldest monasteries in the world. It is located at the foot of Mount Sinai, where, according to a legend, Moses received the Ten Commandments. Since its building, the monastery has never been destroyed and has never been left. Monks still live in its building. The monastery just changed its name. It was called the Monastery of Transfiguration or the Monastery of the Burning Bush. The modern name was given to the place in the 10th century in honour of St. Catherine whose relics are kept in the monastery.
Family holidays with kids in Sinai. How to entertain your child, things to show to children.
Children of different ages and tempers will definitely like holidays in South Sinai. The peninsula has everything for a perfect beach holiday, watersports activities, sightseeing tours and a …

Open
You can see the Chapel of the Annunciation built in the 4th century in the main temple of the monastery. You can get there only after the liturgy and for a short time, the temple is usually closed after the services. Pilgrims go barefoot on the territory of the chapel. There are 12 chapels in the monastery which you can visit and a local library which has a large number of treatises. At noon, the relics of St. Catherine are brought for people. However, even if you are not religious, you should still visit the monastery, see the ancient fortress walls built in the 6th century to protect against enemy attacks. There is even a mosque built for political reasons in the 10th century.
There is a town of Saint Catherine close to the Mount. It is usually visited by pilgrims and tourists. Those who want to feel the atmosphere of the medieval times should definitely visit Pharaoh’s Island. The island was explored almost three thousand years ago during the reign of Hiram I, who was the Phoenician king of Tyre. The ships of cedar traders moored here. Byzantines paid their attention to the island almost twenty centuries after and later it was inhabited by the knights of the order of Malta, who built a fortress here to protect the pilgrims. Later it became useless and was abandoned. In the 12th century local fortifications were rebuilt and since then have not been conquered even after repeated sieges. Unfortunately, the fortress suffered a lot from time and weather. Copyright www.orangesmile.com
Cuisine of Sinai for gourmet with top restaurants and cafe
Kilometres of amazing sandy beaches, pyramids and palms are only a small part of Egypt. The cuisine of this country is not less interesting than its natural beauties. There are several …

Open
Be sure to visit the Papyrus Museum in Sharm El Sheikh. Its exposition tells a lot about the origin, properties and methods of manufacturing this material. You can also buy a souvenir papyrus here. The city also houses the Tutankhamun Museum. It presents copies of all the famous finds made in the tomb of this Egyptian rulers. Al-Mustafa mosque is a gorgeous building which you can admire only from the outside. Pay your attention to two 25-meter minarets. Be sure to visit Coptic Orthodox Church which has two temples. One of them is basement lower temple and the second one is magnificently decorated upper temple. You can see here the bible in the Arabic language. 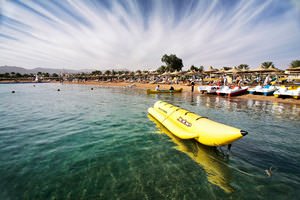 You should definitely find some time and energy to visit Nawamis. They are circular prehistoric stone tombs located in the Sinai desert which are of the same age as the pyramids and maybe even older. Tombs in the shape of wells of Sandstone plates with a diameter from three to six meters and a height of about two and a half meters with a single doorway – the handiwork of the ancient inhabitants of these places. The remains buried at least six thousand years ago were found inside the cells. Scientists are still unable to determine to which exact culture the dead belonged and what was their social status, despite the findings of a variety of items in the burial chambers. Regrettably, due to the large number of tourists Nawamis is gradually being destroying.

In the section below, you can get one of our excursion, activities or city discovery tours over Sinai and surroundings. Our website offers 10-30% lower ticket prices, when compared to the offline purchase on the spot.

City tours, excursions and tickets in Sinai and surroundings

This guide to cultural sights Sinai is protected by the copyright law. You can re-publish this content with mandatory attribution: direct and active hyperlink to www.orangesmile.com.
Sinai - guide chapters 1 2 3 4 5 6 7 8 9

Not far from Luxor, in a mountain gorge, is the Valley of the Kings - a monument of the ancient civilization. Sixty-four tombs of pharaohs are cut in the thick of the cliffs. The most famous tomb is the burial place of Tutankhamun. Another necropolis - Sakkara - is located south of Cairo. The length of the complex is 8 km. Walls of the tombs are decorated with Egyptian hieroglyphics. Of greatest interest is the Step Pyramid of Djoser. The Abu Simbel rock rises on the west bank of the Nile. Two temples are carved in it in honor of Pharaoh Ramses II and his first wife, Nefertari. On the river's eastern bank is the Karnak Temple dedicated to the sun god Amun-Ra, the goddess Mut, and their son Khonsu. Inside you can see ancient wall drawings. The Alley of Sphinxes runs along the temple complex. … Open

Photogallery of cultural heritage of Sinai

Excursions over cultural sights of neighbours of Sinai

Eilat
King’s City Eilat is a popular amusement center that, however, has managed to become a true architectural landmark of Eilat. The complex is open on the popular waterfront that is nearly always crowded. The center, indeed, looks like a luxurious royal castle. Behind impenetrable walls of the castle, visitors will find many amusements and rides that are worth giving a try. ... Open »
Aqaba
A visit to the Aqaba Archaeological Museum should be a mandatory part of any excursion in this city. It exhibits an incredibly interesting collection, all artifacts in which were discovered during the excavations in the city and its nearest suburbs. The oldest archaeological findings in the museum date back to the Bronze Age. They were made more than 6,000 years ago. You can ... Open »
Hurghada
The monastery of St. Paul named after a local hermit is also notable. At the turn of 3rd-4th centuries of our era the hermit has lived in one of the local caves; later it was decided to found a monastery over there. The building is large and fortified; for many years it was used by monks as fortification and saved them from invaders. Currently, an interesting collection of ... Open »
Cairo
Hanging Church is a beautiful architectural monument. The first religious building on the site of the church appeared in the 9th century. The chair of the church is made of marble, and its hall is decorated with unique religious artifacts and icons. Every day hundreds of tourists come to the church to admire the beauty of the building and walk through the picturesque courtyard ... Open »
Al-Karak
The castle had to survive in multiple battles over the centuries. It received the most devastating damages in 1840. This is when the fortress capitulated during the invasion of Egyptian conquerors. Nevertheless, the remaining fragments of the palace make it easy to imagine the former glory of this stronghold. The width of the castle is roughly 125 meters, and its length is ... Open »
Jerusalem
Holy Sepulcher Temple is a no less important religious shrine. In fact, this is a complex of six different churches, each of which reflects different traditions in Christianity. Each chapel of the church has its own unique religious artifacts. However, visitors will not find rich decoration or jewelry in the temple. This place attracts pilgrims not by decoration or great ... Open »

Culture guide to Sinai. Which fascinating sights to visit once you are in Sinai: temples, churches, museums, theaters and castles. Recommendations (with addresses, phone numbers and links) on the places 'must visit' in Sinai. Plan your own city excursion by using this page info!