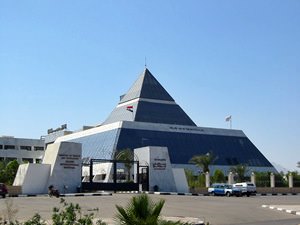 1. Egyptians do not care about punctuality too much and are often late. This should be borne in mind when negotiating a meeting with local residents.
2. You shouldn't be surprised by men kissing or hugging strolling down the street - this is in the order of things in Egypt.
3. Taking a service from the Egyptians, you must be ready to pay for it. People in Egypt are responsive and friendly, but not always help for free. If you don't have money with you, it's better to decline a help offer politely.
National traditions and mentality of people in Egypt
Egyptians are religious people. Most of the inhabitants of the country profess Islam, therefore life in Egypt is based on Muslim dogmas. Once the …
Read further
4. During Ramadan, eating and drinking on the street, as well as drinking alcohol, are forbidden. People visiting public places in a state of alcoholic intoxication may be arrested.
5. Egypt is a Muslim country. Women should give preference to relatively covered clothes for walks in the city. Do not take signs of attention from Egyptian men or answer them with a smile - this may be regarded as encouragement and consent to further acquaintance.
6. Outside the hotel room, it is recommended to wear airy light cotton clothes. A headdress should always be with you. For a trip to Mount Sinai or spending the night in the desert, prepare some warm clothes in advance.
7. Leaving the hotel, you have to leave your room keys at the reception but not to take them with you. That's how the stuff can understand that there are no guests in the room. Copyright www.orangesmile.com
8. Going to the city or on a tour, it is better to leave documents in the room. On the streets of Egypt, you can walk without a passport.
9. Smoking hookah is allowed wherever it is available. In Egypt, it is customary to use one mouthpiece for the whole group of friends. Unwillingness to take it in the mouth after another person due to disgust may be offensive.
10. Bargaining is accepted in the country. If the seller agreed to sell the goods at the price offered by the tourist, one should finish haggling and make a purchase.
11. In Egypt, it is strictly forbidden to photograph any military facilities.
Shopping in Egypt - best shopping places, what to buy?
Tourists coming to Egypt are struck by the variety of goods. If you don't want shopping in the country to disappoint you, it is better to decide what …
Read further
12. Picking up fragments of corals and historical monuments from the ground is not allowed.
13. On Egyptian beaches, women are not allowed to sunbathe topless. Violation of this rule may result in arrest.
14. Swimming in the Nile, sitting on the riverbank without a towel or walking on it without shoes is not recommended.
15. There is poisonous fish in the sea, so do not touch anything with your hands while swimming. After swimming, take a shower and wash your hands with soap.
16. Usually, tourists need to pay for help to come down from the camel's back.
17. Avoid drinking tap water - it is not of the best quality and may lead to stomach upset.

This collection of travel tips for Egypt is protected by the copyright law. You can re-use the content, but only under the condition of placement of an active link to www.orangesmile.com.
Egypt guide chapters 1 2 3 4 5 6 7 8 9 10 11

Colorful and unique places in Egypt 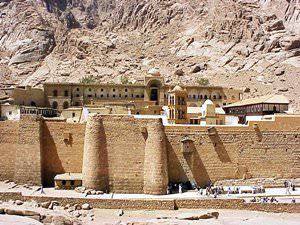 The St. Catherine's Monastery located on the Sinai Peninsula is also known as the Sinai monastery. That's a Christian landmark of world importance. It is located in an incredibly picturesque remote mountain area, at the foot of Mount Sinai, at an altitude of 1 570 meters above sea level. According to historical records, the monastery was founded in the 6th century by an order of Emperor Justinian. In 2002, the ancient monastery was added to the UNESCO World Heritage Site.

The monastery is an elaborated and very large architectural complex that includes the Basilica of the Transfiguration, the Chapel of the Burning Bush and a number of other important buildings, among which there are symbolic biblical objects. The Moses Well that is mentioned in the Bible is situated there. One of the … Read all 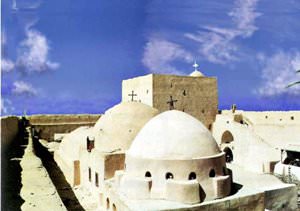 Many unique attractions and Christian artifacts are hidden among the desert landscapes of Egypt. The Wadi Natrun desert is a great example. One of the main features of this area is a variety of lakes; local water has high sodium contain. Devotees and tourists are attracted not only by the unique natural attractions, but also by ancient monasteries.

More than one and a half thousand years ago, the valley of Wadi Natrun housed dozens of Christian monasteries and churches. Only four monasteries survived to these days. The most famous of them is the Monastery of Saint Macarius the Great. Almost all the Christian buildings and shrines were destroyed in the year 641, when Egypt fell to the onslaught of Arab conquerors. Precious Christian relics are kept today in each of the monasteries of the … Read all 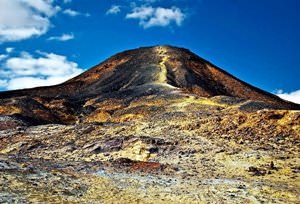 In Egypt, travelers will have an opportunity to visit one of the most unusual sandy regions in the world, the Black Desert. It was forming through thousands of years by volcanic activity that took place in the area. Now, the desert is strewn with black stones of hardened lava. In some places, you can see majestic hills covered with black stones. Other parts are large plains with lands of orange to brown color.

Grim and at the same time extremely attractive landscape seems unearthly. Tourists come to admire it from all over the world. The Oasis of Bahariya and another outstanding natural attraction of Egypt, the White Desert, are located close to the Black Desert. The uninhabited and absolutely lifeless desert attracts not only curious tourists, but also professional photographers. At … Read all
All unique sightseeing Egypt

Advices for popular cities of Egypt

Cairo
1. Tips in Cairo should be given literally for any service. Do not forget to leave cash reward to a waiter in a restaurant, maid at your hotel and, of course, to a guide, as well as a passerby, who has helped to find the way to places of interest. 2. There are always police officers on duty in the streets of the city. Feel free to ask them for help. The representatives of law enforcement will tell you how to get to the street of your destination and will always help. 3. Do not wear short … Read more

Sharm el-Sheikh
1. Travelers going for a trip in winter should definitely bring along some warm clothes. The fact is that at night the temperature often drops to +15 C, so this stuff will be useful to fans of evening walks. 2. Despite the fact that in summer the temperature seldom falls below 40 degrees, the heat doesn’t strike. It’s better to go for long walks and excursions in the morning; in the afternoon travelers are recommended to spend time indoors. 3. Sharm El Sheikh has well-developed intercity … Read more

Hurghada
1. The most affordable and profitable way to make long distance and international calls is to use street phones. They accept special plastic cards that can be bought literally at any local store. It’s worth remembering that not all street payphones provide international calls. 2. Mains voltage is 220 V; there are standard European-style sockets in all local hotels. If necessary, you can ask for an adapter in a hotel or buy it at any specialty store. 3. Tourists are advised to use only … Read more

Alexandria
1. The best time to visit Alexandria is between May and June when good weather reigns here. 2. In the city, you can take pictures of any sites you like, having previously asked permission from local residents. 3. When making purchases in a store, it is better not to show a seller any expensive items (for example, the latest iPhone or a camera). Experienced sellers can increase the price of a product several times if they find a buyer too rich. 4. Many museums close quite early, so … Read more