Preparing your trip to Alexandria: advices & hints - things to do and to obey 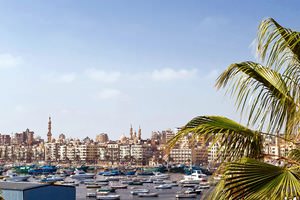 1. The best time to visit Alexandria is between May and June when good weather reigns here.
2. In the city, you can take pictures of any sites you like, having previously asked permission from local residents.
3. When making purchases in a store, it is better not to show a seller any expensive items (for example, the latest iPhone or a camera). Experienced sellers can increase the price of a product several times if they find a buyer too rich.
4. Many museums close quite early, so after 17:00 no cultural institution accepts guests. As a rule, it's allowed to take pictures at all galleries and museums, but in some establishments, a small additional fee is charged for this.
5. Tipping in local restaurants does not exceed 5 percent. As a rule, visitors give waiters the change after paying the bill. Copyright www.orangesmile.com
6. Tourists are advised to buy water in stores and avoid drinking tap water.
7. When communicating with the locals is not necessary to criticize their culture and traditions, and private life and religion are also a taboo.
Guide to Alexandria sightseeing - things to see and to visit
Second biggest city of the country, Alexandria is also known as the largest port and an internationally famous resort. Each year the city attracts thousands of tourists mainly by its …

Open
8. Taxi may not only be ordered to your hotel or restaurant but also "caught" on the street. Taxi prices are quite high and it is almost impossible to bargain with drivers - if you're lucky, the price will be reduced by only 10%.
9. The most popular souvenirs, which tourists buy for memory, are pieces of papyrus depicting local attractions. Such a souvenir must necessarily be accompanied by a certificate of quality. Many fakes of rice paper are sold on the street.
10. One of the most expensive products in local stores are sunscreens, so it's best to bring creams with you.
11. In local restaurants, lemon slices are served in addition to ordered dishes. The thing is that local food may be quite unusual for foreigners, and the lemon acts as a kind of disinfectant, which normalizes the process of digestion.

Preparing your trip to Alexandria: advices & hints - things to do and to obey You can re-publish this content with mandatory attribution: direct and active hyperlink to www.orangesmile.com.
Alexandria - guide chapters 1 2 3 4 5 6 7 8 9 10 11 12 13

What to visit being in Alexandria - unique sights 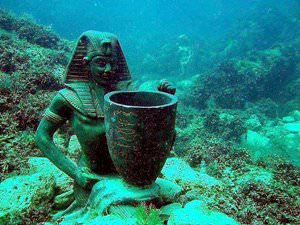 Distance from Alexandria center - 3.6 km.
Not far from fragments of the once magnificent palace there are ancient ruins of the Temple of Isis. The reason for these beautiful buildings to end up under the water is very simple - a few thousand years ago, Alexandria suffered a series of severe earthquakes, because of which part of its coastal area was flooded with water. Ruins of ancient Alexandria, which today can be seen under water, resemble luxurious exposition of the historical museum. #Columns of ancient buildings and beautiful sculptures, millennial bas-reliefs and works of art that once adorned the palace of Cleopatra rest on sea bottom. Experienced divers prefer to visit these places in summer, when water temperature is the most comfortable for diving and there is nothing to disturb from admiring underwater sights. It’s also worth noting that scientists have discovered and raised to the surface a lot of interesting artifacts, which are now represented in major museums of Egypt. … Read further 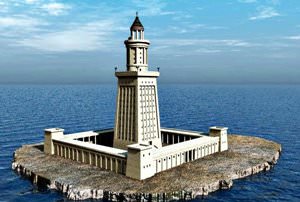 Distance from Alexandria center - 5.7 km.
After its completion, the lighthouse was the first structure of its kind in the world. Its scale was second only to the Giza Pyramids. The height of the lighthouse was about 30 meters. The structure stood on the small island of Pharos, which was located at the entrance of the Alexandria Bay. Unlike many other great buildings of ancient times, the Lighthouse of Alexandria had an important purpose. It helped ships to pass a reef that was located at the entrance to the bay. As noted earlier, a unique system of beacon fires appeared a few hundred years later. Initially, the lighthouse flagged vessels with usual smoke that could be seen only in the daytime. … Read further

Tips for the cities around Alexandria

Cairo
4. All major hotels, shopping complexes and petrol stations allow payments by credit card. When going to the market, make sure you have enough paper money. It is better to stock up with more cash in small denominations. 5. Currency can be exchanged not only in banks, but also in specialized exchange offices, which can be found in every major shopping center and restaurant. ... Open »
Paphos
4. A working schedule of public offices may vary depending on the part of the year. One should specify it in advance in a hotel or in a tourist information center. As a rule the public offices start working not later than at 8:30 in the morning and serve customers till 13:00. Monday is considered to be a prolonged working day. 5. Setting off to a shopping tour or to a ... Open »
Tel Aviv
4. Thrifty travelers and those who prefer to stay in budget places have to pay attention to the hotels located in the southern part of the city. Lots of affordable hotels are also located in the immediate vicinity of Tel Aviv; it is quite easy to get there from the city center. 5. For souvenirs tourists are advised to go to local markets, where goods differ not only with ... Open »
Netanya
4. All the local beaches have specially equipped areas with sun loungers and changing cabins. The coast here is sandy, so you can rest comfortably without any beach equipment. 5. In the resort area, there are separate beaches for men and women. Their main visitors are local residents who observe strict religious rules. 6. The best choice for water sports enthusiasts ... Open »
Jerusalem
4. Tourists should not forget about the general rules of behavior. People cannot express their emotions publicly and behave noisily in public places. When entering a public institution, you should definitely smile and greet the people present. 5. When heading to a business meeting, you should definitely do your best to arrive on time, but a delay will not be considered a ... Open »
Haifa
4. Sabbath is a common day off; it begins at Friday evening and ends on Saturday evening. At that time, government agencies, much of the shops and public transport don’t work. 5. On weekdays, government agencies serve visitors from 8:30 am to 7:00 pm; a rather long break is possible in the afternoon. Local shopping centers and shops close no earlier than 6:00 pm and ... Open »

Travelling to Alexandria - advices and tips. What should be provisioned in advance, the rules you might want to follow, and the things you better avoid doing in Alexandria. We help you to make your trip smooth and easy, with no unexpected surprises.