Fun and festivities in Canada - celebrations, festivals and cultural events 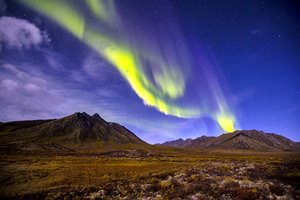 Canada is a multinational state and therefore the country has an assortment of holidays. In addition to the states, in many regions their own memorable dates are celebrated. Canada is a Christian country, and therefore it marks the celebration of Christmas, Easter and other religious holidays. Another favorite folk festival can safely be called Halloween. National holidays in Canada are given special attention. Canadians throughout the country celebrate Independence Day; all regions, except for Quebec, celebrate the day of Queen Victoria. One of the most famous festivals in the country is the Canadian Tulip Festival, which takes place every year in Ottawa.
The soul of Canada - religions and languages
Geographically, Canada is a large country. The religion in it is thus quite diverse. Due to the predominance of ​​religious pluralism in the …
Read further
Preparation for the celebration of Christmas begins on Christmas Eve. Children are put to bed earlier this night, so that Santa Claus can bring them gifts. At this time, the whole family, relatives and friends gather at the festive table. On December 25, festive services are held in churches. Canadians have fun all day, rejoice and congratulate each other, exchange gifts, including with strangers. On New Year's Eve in many cities usually, there are festive concerts. During mass festivities, it is forbidden to drink alcohol. Easter is another symbolic religious holiday. On this day Canadians give each other Easter baskets with painted eggs and sweets in the form of Easter hares. A lot of sweets go to children especially.
July 1, all residents of the country celebrate Canada Day; a national holiday associated with the country gaining independence. The celebration takes place in the open air. Lavish parades, carnivals, an air show of performances. Areas with barbecue and other entertainments are organized. In the evening, traditional colorful fireworks are rattled. In the capital of the country, there are mass concerts, which are usually attended by even the monarch of the country. In Quebec on this day, another holiday- Moving Day is celebrated. On July 1, the rental contract ends, and many residents traditionally move out of their rented dwellings and move to other apartments. Quebec Canadians are indifferent to national holidays; they are mainly descendants of French settlers, and therefore do not consider themselves part of the country. Copyright www.orangesmile.com
Canada economy - strengths, wealth and problems
At present, Canada is one of the most developed countries in terms of economy. The standard of living of the local population of Canada is quite high, …
Read further
On June 24, in Quebec the National Day of Quebec is celebrated, coinciding with the day of John the Baptist. On this day in the whole region there are mass festivities, concerts and fireworks. Another national holiday of Quebec is the National Patriots Day. On this day, they remember the events that occurred during the Revolt of the Patriots in the 19th century, which consisted of French Canadians. The holiday is a symbol of the struggle for independence and national self-identification of the French-speaking population of the country. On the first Monday of August in Canada, there is a Civil Holiday. This day is a nationwide weekend; it is not associated with any official holiday. On the first Monday of September there is another holiday - Labor Day. The holiday is held in honor of all working people. Canadians like to spend it in nature. In cities there are fairs and festivals. 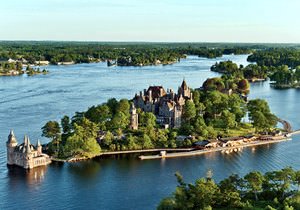 In Ottawa, every year winterlude is held - a winter festival that attracts hundreds of thousands of tourists to the city. Winterlude is a real winter holiday. The whole city becomes an exhibition platform for ice sculptures, skating rinks for figure skating, and ice hockey. Numerous snow slides are created. On Lake Doe - the main ice rink, thousands of people can gather at the same time. Another famous Canadian holiday is the Calgary Stampede cowboy festival in Calgary. For 10 days in the city there are rodeo competitions. In addition to them, visitors of the holiday can go to exciting wagon races in the style of the Wild West, and also visit the agricultural fair. In the framework of the festival, there are dances of Indian tribes, attractions are set, and a parade is held.
Unique sights of Canada from our series 'Extreme places on Earth'
These spots really worth the attention of a real traveler-researcher. …
Read further
FrancoFolie de Montreal is the largest francophone festival in the world. It takes place in the middle of June and gathers musicians performing in different styles - rock, chanson, pop, country, folk, punk, and hip-hop. Over the course of two weeks, more than 250 performances are given in Montreal. Another famous music festival takes place in Quebec in July in the open air. The program of the festival consists of three concert venues in different places of the city: for pop stars, for ethnic music and for different genres. The largest film festival in the country is the Toronto festival. It is one of the largest in the world. Stars of American and European cinema gather in Toronto in September to receive a prestigious award. 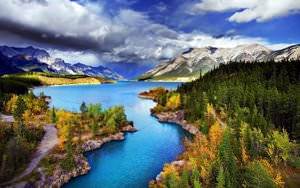 One of the most famous national parks in Canada is the Nahanni. It was founded in 1976. The reserve occupies an area of ​​4 776 square km. Travellers who choose to visit this wonderful nook of the world will be able to see a lot of unique attractions. One of the main symbols of the park is the South Nahanni River. For many travelers, it is known for its beautiful Virginia Falls. Its height is 90 meters, so this waterfall is almost twice as high as the world-famous Niagara Falls.

Four canyons are situated above the river. Thermal springs are another amazing feature of the park. Tourists who want to explore all the iconic landmarks of the reserve are recommended to stroll through the maze of karst caves, some of which feature picturesque underground rivers. Mountain areas with some of … Read all 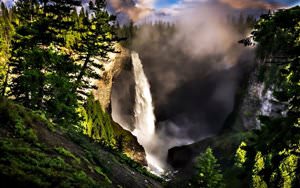 One of the major attractions of British Columbia is Helmcken waterfall. It is located among the coastal mountains, in the Tweedsmuir nature reserve. The graceful waterfall is the second largest in British Columbia; its total height is about 400 meters. The mouth of the waterfall is the northern tip of Lake Turner, then it falls into a narrow canyon, and flows into the Atnarko River.

The pathfinder of the amazing waterfall was Robert Henry Lee. He was the specialist in land survey, who worked on the territory of the nature reserve in 1911. He was so impressed by the beauty of the waterfall that rushed to inform the government. The researcher suggested naming the waterfall McBride. A few days later he received a reply with another name, Helmcken. The landmark was named in honor of the … Read all
All unique sightseeing Canada 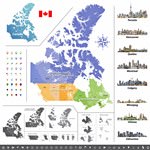 Attractions and entertainment in top cities of Canada

Montreal
The city owns a beautiful botanical garden named Montreal Botanical Gardens demonstrating its visitors a rich collection of exotic plants and flowers. The most popular beach is considered to the Plage du Parc Jean-Drapeau coast area which is located in a few minute drive from the city center. Those who have missed a chance to visit the city during the beach season should set to the city embankment. Each day the ships and boats cruise the coastline and offer exciting on water sightseeing tours … Read more

Toronto
If you won’t get enough of local rides, you may visit the Ontario Place family entertainment complex. This mall has a very unusual design, as it was built on artificial islands. In addition to a variety of rides, Ontario Place has concert venues, where live music and exciting shows are regularly held. Fans of shopping would also like Toronto. Lots of interesting luxury boutiques and shops can be found on the Yorkville-Bloor street. A significant part of the street is pedestrian, so it is … Read more

Vancouver
If you are interested in shops only, then you might like Metrotown Centre and Pacific Center. The boutiques located in these department stores sell clothing and accessories by internationally famous brands. There are also luxurious cosmetics and perfumes shops, jewelry stores and souvenir shops there. Tourists should also not forget to visit the market, which is located on Granville Island. This is the best place to buy freshest and finest seafood. In order to find memorable souvenirs, do not … Read more

Calgary
Calgary Tower remains one of the favorite attractions for travelers. The tower is also the highest building in the city. The top of the tower is the location of a famous restaurant. The restaurant is very popular with gourmet visitors, but travelers are attracted not only by the food served there, but also by the fact that this is the highest observation deck in Calgary. An opportunity to enjoy the look of the city from above and stand on a transparent glass platform attracts hundreds of people … Read more

Banff
An equally breathtaking sight is Lake Peyto. Several comfortable tourist centers are based around it, so nature enthusiasts can spend a few days here. The lake was named in honor of the famous traveler who was the first to discover it. Due to the inclusion of rare minerals, the water in the lake has a rich turquoise hue. Fascinating hiking tours are held in this area in summer. Among the most interesting attractions that can be seen in the national park, it is worth noting Johnston … Read more

Ottawa
The youngest guests of the park are offered genuine costumes of pirates. They also can take part in various entertaining events. The territory of the park features several pirate ships which are totally at disposal of kids. Elite sport enthusiasts should pay a visit to one of the local golf centers. The most attractive among them is considered to be the Pine View Municipal. The prestigious golf club is located not far from the city center and apart from high end golf course for a good play, the … Read more

Edmonton
Those who don’t like to walk on foot can contact Whitemud Equine center arranging exciting horseback rides through the most picturesque places of the city and its surroundings. Among sports complexes, Kinsmen Sports points out, a huge selection of fitness machines are available to its customers; experienced coaches will help to make a training program more efficient. Among the golf centers Rundle Park and the Northern Bear are worth noting. They are famous because of high quality of courses … Read more

Map of fun in Canada