Top places to stay in Beijing - most luxury and fashionable hotels 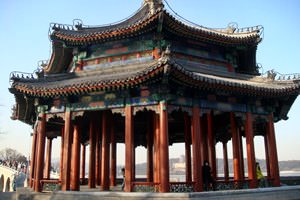 is located in the heart of Beijing. The spacious hall of the hotel is simply spectacular – a state-of-art glass roof covers a marvelous atrium at the height of 22 metres. Inside, travellers will find elevators with glass walls, a fountain, ancient statues of Greek Palladium and Roman amphitheater, a European bar and a scene. Having entered the hotel, everyone will feel like in a royal palace.
Check the hotel prices and availability
Copyright www.orangesmile.com
The Peninsula Beijing
Check on the map. From Beijing center - 2.3 km
The Peninsula Beijing

occupies a leading position among Beijing hotels. This hotel has always been an example of great service and refined style. Upon entering, travellers appear in an inner yard that is also a hall and a shopping promenade with designer shops and exclusive boutiques. Carefully developed by designers from Hong Kong, inner design of guestrooms and apartments is made as a combination of European and traditional Chinese styles. Traditional national elements are represented by Chinese lanterns, patterns and drawings of dragons and lions. Luxurious apartments of the hotel are often called the most elegant ones in whole Beijing.
Check the hotel prices and availability
Grand Hotel Beijing Check on the map. From Beijing center - 2.5 km
The construction of Legendale Hotel Beijing

ended just in time for the 2008 Olympics. The main idea of designer team was to show European elegance and luxury in the Chinese capital. The first object that had appeared on the site of the hotel was a breath-taking 17-story atrium. Antique furniture, expensive tapestries and decorations were brought directly from Europe. The exterior of the hotel reminds of a 19th century building in Paris. Beautiful gardens that remind of the emperor ones add special charm to the hotel. Spacious rooms with high ceilings, beautiful furniture and elegant sculptures are no less stunning than the grandiose hall. Legendale Hotel Beijing is a place where two worlds, old and new Beijing, meet.
Check the hotel prices and availability
V-Continent Beijing Parkview Wuzhou Hotel Check on the map. From Beijing center - 7.9 km
The right choice for both business and leisure travellers, V-Continent Beijing Parkview Wuzhou Hotel

is distinguished by beneficial location close to important business centres and popular landmarks. VIP guests will find a rich choice of suites and presidential suites at the hotel. These rooms are distinguished by rich furnishing and state-of-art equipment. Besides elegant guestrooms, travellers are welcome to attend the hotel’s spa with sauna and massage cabinets, a large in-door swimming pool and a modern fitness centre with gym. In addition to that, there are 6 restaurants of different specialization at the hotel, including Café Asia restaurant that serves buffet type international cuisine.
Check the hotel prices and availability