«« BEGINNING - PART I
Video of flights over top monuments of Beijing in HD format.
Use 'Full Screen' mode.
Any guide of Beijing would be incomplete without a review of its most impressive architecture monuments - Temple of Heaven, Beijing National Stadium, National Museum of China, White Pagoda, Beijing Exhibition Center and many others. It’s difficult to overestimate their historical and cultural importance for China. The style and architecture of any of these landmarks are worth a visit when you are on vacation in Beijing. However, you can virtually visit any of these wonderful monuments without leaving your comfortable chair. For that purpose, simply 'fly' over the 3D model of Beijing that was created by OrangeSmile and GoogleEarth. All you need to do is to click the video on this page. 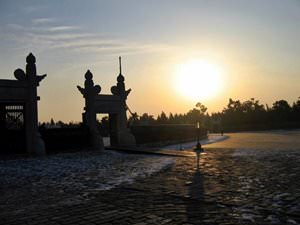 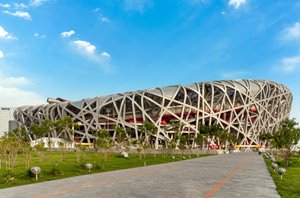 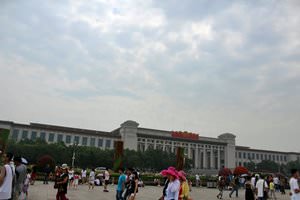 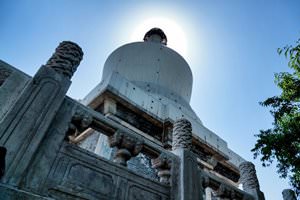 Facts:
» The White Dagoba at Miaoying Temple is the most ancient historical monument of China dating back to the times of the Yuan dynasty, which ruled in the 13th century.
»  The White Dagoba is located on the Jade Island on the territory of a lake. This beautiful white building, standing on a raised platform is 50.9 m high.
»  Its shape, in the form of an inverted bowl, resembles a Buddhist bowl for alms. The construction of the spire completes the monument, 36 bells are also hung there giving a melodious ring.
»  During the earthquake in 1976, the top of the Dagoba bent over and the brickwork cracked. In 1978, the whole temple complex was restored. Many archaeological treasures have been found.
»  At present, the entrance to the Dagoba is immured. But you can wander around in the yard. Locals installed a smoker and a "bell of discovery", into which you can call and "purchase" a fulfillment of desires.
»  Since 1961, the White Dagoba at Miaoying Temple is considered a national monument of China. 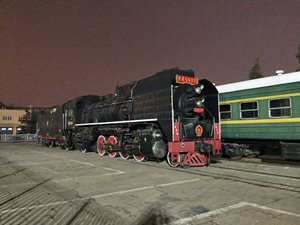 Facts:
» The Beijing Exhibition Center was built in 1954 by Soviet specialists to demonstrate the successes of the Soviet state in engineering and other industries.
»  Apparently, therefore, the main building of the exhibition complex recalls the style of the monumental Stalin period. The central entrance ends with a tower with a spire, at the top of which flashes a red star.
»  Besides the main building, the complex includes 12 exhibition halls, a museum, a restaurant, an amphitheater for 1000 seats. The area occupied by the center is 735,000 square meters.
»  After a long break in 2003, the exhibition complex was modernized.
»  Initially, when the exhibition was opened, a chic Moscow restaurant began to operate here. Interior and all the furniture, including the luxurious chandeliers, were taken from the Soviet Union.
»  This was the first foreign restaurant in Beijing. For many years the restaurant continued to work and even changed its name. In 2009, the restaurant restored the original interior, which was once made by the Soviet specialists.
»  The popularity of the restaurant "Moscow" does not decrease over time. Its daily visitors are not only guests of the capital, but also the local residents.

Facts: » The Beijing Sport Palace has been opened in 1968 in the center of Beijing.
»  It hosted competitions in table tennis, rhythmic gymnastics, hockey and figure skating, basketball and volleyball.
»  Its distinctive feature was that it provided for special provisions designed for wheelchair users.
»  In 2001, it was reconstructed for the World Universiade. Even more cardinal reconstruction was carried out prior to the Summer Olympics in 2008.
»  The Sport Palace can accommodate almost 18000 spectators. During the Olympics the palace hosted the volleyball competitions.
»  It is planned that at the Winter Olympic Games in 2022, the palace will host all hockey battles.
»  In 1971, China was first visited by the team of US table tennis athletes. The Chinese and US teams played here - at the Beijing Sport Palace.

Plan your own tour over Beijing on the monuments map

Search for architecture monuments of Beijing on the map

Tours through neighbours of Beijing