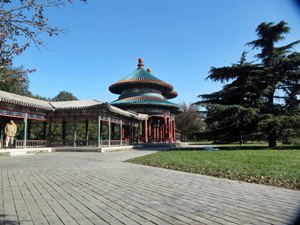 was open more than 110 years ago. During its long history the building was conventionally divided into several blocks, and its name was changed as well. Currently, there are three different hotels there, namely Beijing Hotel, Raffles Beijing Hotel, and Grand Hotel Beijing, but they are connected by the same history. In the past, this hotel was visited by many famous people, including Bernard Shaw, Richard Nixon, Nikita Khrushchev and many more. During the Olympic Games, the headquarters of the International Olympic Committee was located in the hotel. Nowadays, the hotel hosts the annual meeting of participants of the “Miss World” contest. Founded in 1900, the hotel can be proud of its traditions and rich history.
Check the hotel prices and availability
Red Capital Residence
Check on the map. From Beijing center - 3.2 km
Red Capital Residence

is not just a hotel, but a historic place with outlook of the “communist paradise”. Guestrooms in this hotel are reconstructed apartments that were once used by leaders of the party. A cozy mansion with an inner yard has five guestrooms, including “General Secretary Suite” with portraits of Mao Zedong and 2 “Concubine Suite” with frivolous accessories. The remaining two suites are named after American Edgar Snow and Chinese Han su yin, who devoted their lives to studying of the communist epoch in the history of the country. All guestrooms are decorated with elegant antique furniture, political posters and figurines of the Red Army soldiers. You will also find old typing machines and books by Karl Marks on tables. The hotel’s restaurant serves favorite dishes of Mao Zedong, and in order to visit the bar, one needs to go down to the former bomb shelter.
Check the hotel prices and availability
Copyright www.orangesmile.com
Great Wall Sheraton Hotel Check on the map. From Beijing center - 6.8 km
Modern, the biggest and most luxurious Great Wall Sheraton Hotel

was the first five-star hotel by an international hotel chain in China. The eye-catching shiny building never ceases to amaze its guests with state-of-art architecture and support of modern trends. Spacious inner premises with lots of light, expensive materials in décor and thoughtful design with attention to slightest details have become a standard. Comfortable guestrooms feature refined atmosphere with elegant furniture and dainty Chinese artworks. Overall, this is a great hotel that fits the highest international standards.
Check the hotel prices and availability
Advices to travellers: what you should know while being in Beijing
1. It is not common to leave a tip to service personnel in Beijing hotels. If you definitely want to please a maid, a pair of Yuan would be enough. 2. Bargaining is natural on the local …

. The hotel was fully refurbished in 2003, which has set a new standard for the hospitality business and not the hotel is ready to greet even most discerning travellers. Upon entering, guests will see a giant hall with a broad ladder, sparkling chandeliers and columns. This hotel is liked by heads of the countries, famous scientists and businessmen. VIP guests are offered to book guestrooms on the Horizon Club floor that has special privileges. The hotel offers a wide range of services, including the only “oxygen room” in Beijing.
Shichahai Sandalwood Boutique Hotel Beijing is also a high class place with a very interesting history. The hotel is located in a fully restored Xinhua mansion that once belonged to regent Soni who lived during the reign of the Qing dynasty. During many years, the luxurious historic building has managed to keep its original look, so travellers will still find sandalwood furniture and décor, as well as a traditional inner yard. The marvelous hotel has only 10 guestrooms, every of which is decorated in accordance with principles of the Forbidden City.
Check the hotel prices and availability

Search hotels in Beijing for your taste

Famous hotels in the region of Beijing

Hong Kong City
The Kowloon Hotel occupies a stylish skyscraper with a shiny mirror façade. Guests will be pleased with amenities and services available at the hotel as they help travelers have a comfortable and interesting stay. The Kowloon Hotel is known as a regular venue for various music sessions, so guests of this hotel will have an amazing opportunity to enjoy live music and fine ... Open »
OrangeSmile.com - online travel reservation expert providing reliable car rental and hotel booking services. We feature more than 25.000 destinations with 12.000 rental offices and 200.000 hotels worldwide.
Secure Server