Sightseeing in Suzhou - what to see. Complete travel guide 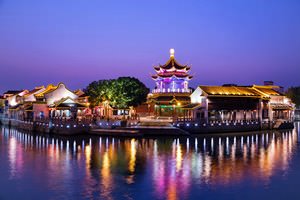 Suzhou is often called the "Venice of the East" because of the abundance of river channels piercing the city. The first mention of the city dates back to the early 6th century BC. Suzhou received its present name almost a thousand years later, in 589. The city founded on the Grand Canal of China has significantly expanded over the next years. Currently, both sides of the canal are occupied by the historic district of Suzhou full of priceless architectural monuments and cultural centers.
Your active city break in Suzhou. Attractions, recreation and entertainment - best places to spend your day and night here
Walking through picturesque gardens is hardly the only entertainment available to Suzhou guests. You can have fun as a whole family in Suzhou Amusement park. It occupies a vast area and is …

Open
When it comes to cultural features, one of the oldest crafts of the picturesque Chinese city - silk production - should not be ignored. The national craft's developing began during the reign of the Song Dynasty, in the second half of the 10th century. It has been of particular importance for the city for over a thousand years. Like hundreds of years ago, Suzhou is one of the largest silk production centers in the country, and more and more its visitors buy chic textiles as memorable gifts.
One of the main distinctive features of the present-day city is the abundance of beautiful gardens and parks. Its active landscaping and planting began several hundred years ago, during the reign of the Ming dynasty. City officials erected their luxurious estates among beautiful gardens, many buildings have survived to our days. The main symbol of the city has always been the Grand Canal of China, the construction of which began soon after the founding of the first settlement and lasted more than 2,000 years. The unique canal, an abundance of historical sights and beautiful gardens are a small part of Suzhou's attractive features. Copyright www.orangesmile.com
Top hotels in Suzhou for business trip or short vacation
Suzhou has a lot of high-class hotels, which are rightfully considered to be among the best in the world. Crowne Plaza Suzhou Hotel is a real city attraction. It is housed in a unique …

Open
Travelers are also attracted by a rich but harmonious rhythm of life typical for the ancient city. Adherents of gastronomic tourism often visit these places just to explore Suzhou's national cuisine, which is strikingly different from the classical Chinese. Not only numerous national restaurants but also the central city market where you can taste and buy a lot of national delicacies are perfectly suited for getting acquainted with it. Here you can find rare seafood and original sweets, which are one of the main distinctive features of national cuisine. Delicious desserts are prepared from rice flour - that's why they taste quite unusual and incredibly attractive. One of the most popular national desserts is Moon Cake, which is often served with different varieties of fragrant Chinese tea. 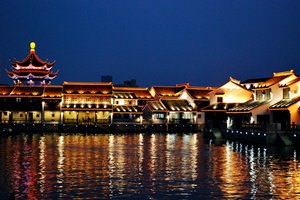 The city has been a major trade center since ancient times, so fans of shopping will not be disappointed as well. The above-mentioned central city market remains the city's busiest place, it seems that life never freezes here. In addition to fresh products, on the market, you can buy memorable gifts and clothes, the best Chinese teas and local sweets. Visitors to the market successfully combine walks in colorful rows with dining in small charming restaurants. Besides luxury clothes made of the finest silk, no less popular national souvenirs are amazingly skilful Chinese fans, which has been produced here for many centuries Suzhou is a godsend for fans of active pastime: fascinating and informative tours, walks through picturesque places and colorful markets, as well as fun entertainment in its wide diversity.
Excursion over cultural sights of Suzhou - 'must visit' points of interest
Picturesque gardens, national-style pagodas and temples, interesting museums and cultural establishments are the main sights of present Suzhou. The ancient Guanqian Street is one of the most …

Open
The vast majority of excursions in Suzhou include visits to gorgeous architectural and religious landmarks of the city and its wonderful gardens. The Humble Administrator's Garden is one of the largest gardens in Suzhou. It covers an area of 4 hectares. The fabulous garden was founded yet at the beginning of the 16th century. During its long history, it was redesigned and expanded a number of times. Nowadays, the Humble Administrator’s Garden is famous for a rich collection of rare plants and an incredibly beautiful design. The garden is also the location of the city’s museum that is open in an attractive historical building. The venue is very interesting to visit as it exhibits a rich collection of historic items and artworks. Besides that, there are a theater and several open-air venues for all kinds of events and celebrations. 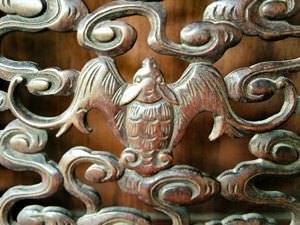 When it comes to architectural landmarks of the city, it is important to mention the Beisi Pagoda, the length of which is 76 meters. The exact building year of the pagoda is not clear. First mentions of the attractive building date back to 1150. In the past, it was a part of a large monastery that, unfortunately, has not survived until our days. Not far from the pagoda, there is one more attractive historical building that is now occupied by the Museum of Silk. As it is not hard to guess from the title, this museum is dedicated to one of the national crafts in China – silk weaving.

This guide to iconic landmarks and sights of Suzhou is protected by the copyright law. You can re-publish this content with mandatory attribution: direct and active hyperlink to www.orangesmile.com.
Suzhou - guide chapters 1 2 3 4

City tours, excursions and tickets in Suzhou and surroundings

Art galleries in Suzhou and around
♥   Art museum 'Suzhou Museum' Suzhou, 4.7 km from the center. On the map

Sights around Suzhou from our guide 'Extreme places on Earth' 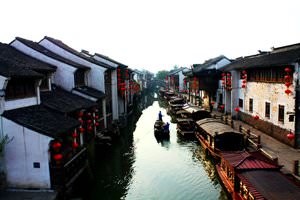 Distance from Suzhou center - 59.9 km.
Like many other waterways, the Chinese Grand Canal of today has no former economic significance and is becoming increasingly popular with tourists. There are many big cities on the Grand Canal as well as charming farmlands. More than 15 large settlements are located along the entire course of the waterway, so visitors have always a place to stay and boat trips will for sure make the holiday unforgettable. … Read further 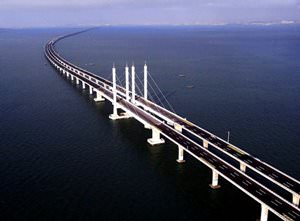 Distance from Suzhou center - 49.1 km.
Immediately after the opening, the Danyang-Kunshan Viaduct was entered into the Guinness Book of Records. For more than 4 years, the bridge has been the largest structure of this type on earth. The bridge built for the sole purpose - it should improve the traffic between the big cities of the country. Now the locals can get to Nanking from Shanghai at best. For the tourists, the express train running across the bridge became an attractive attraction. … Read further

Search touristic sites on the map of Suzhou

Sightseeing in regions nearby Suzhou

Shanghai
An amazing city of contrasts, Shanghai, can offer you perfect conditions for different kinds of a recreation. One of the busiest places in the city is the Huangpu embankment The Bund. There are very interesting excursions on river boats. Admires of shopping choose the busy street Nanjing Lu for having a rest. It contains a continuous series of colorful shopping centers, ... Open »
Hangzhou
Many claim that Hangzhou is the most charming and picturesque city in the world. It’s a large place with the population of several million people that is famous for its inimitable architecture, rich cultural traditions, and unhurried and harmonious atmosphere. The choice of natural landmarks is no less magnificent and diverse. For example, no vacation in Hangzhou is possible ... Open »
Nanjing
The Nanjing Museum is one of the first landmarks in Nanjing that tourists prefer to visit after their arrival. The establishment exhibits numerous collections dedicated to Chinese art, as well as numerous artifacts discovered in the country during numerous archaeological excavations. Starting from 1933, which is the year of its opening, and until the 50s of the same century, ... Open »
Taipei
Taipei is the capital of the island of Taiwan and its eponymous municipality. The amazing city with a beautiful authentic culture and a unique modern style has long attracted tourists with its unique historic monuments, rich cultural life, and variety of entertainment. Present Taipei is one of the most densely populated and expensive cities in the world. The permanent ... Open »
Xiamen
Xiamen is situated in the Fujian province. This city is a major port and an important tourist center of the country. It was founded almost 2,000 years ago. In the 3rd century AD, at the place of modern Xiamen, a large city of Tongan was located. In the Middle Age the city was one of the most important shopping centers of the country. The region exported silk, highly valued by ... Open »
Incheon
Do you want to see the first Korean museum opened for the general public? In this case, head to the Incheon Metropolitan City Museum, which opened its doors in 1946. Initially, the main purpose of this establishment was to conduct historical studies and preserve the cultural traditions of Incheon. When the city celebrated its 100th anniversary, a memorial hall and complex ... Open »

All about Suzhou, China - sightseeings, attractions, touristic spots, architecture, history, culture and cuisine. Prepare your trip together with OrangeSmile.com - find out the 'must see' things in Suzhou, which places to visit, which excursions to take, where the breathtaking views are waiting for you. Planning your trip with this travel guide will help your to get the most out of Suzhou in few days.