Sightseeing in Lhasa - what to see. Complete travel guide 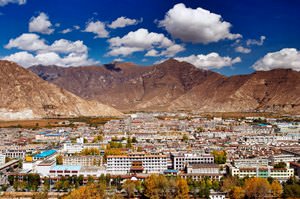 Lhasa is the capital of the Tibet Autonomous Region. Besides its official name, Lhasa is often referred to as the “roof of the world” or “the place of gods”. This city was not available for tourists for many years. Lhasa opened its doors for foreign guests only twenty years ago. Hundreds of pilgrims from all regions of China visit Lhasa in order to pray in the sacred place of this settlement – the Jokhang Temple. When taking a stroll in the city’s streets, it is not rare to see monks holding prayer wheels. These wheels are a part of an old ritual. West Lhasa is a more active and populated part of the city. The major infrastructure is also located here.
According to local legends, Songtsen Gampo, the Tibetan emperor, was the founder of Lhasa. The king, who ruled in the first half of the 7th century, chose Lhasa the capital of his empire. However, historic records prove that the center of the Tibetan Empire was changed several times to different Chinese cities. When Lhasa became the capital of Tibet, it started growing in size and developing quickly. This is when the first large monasteries appeared in the city. Numerous students of Je Tsongkhapa studied here. In the 17th century, the 5th Dalai Lama decided to make Tibet his own. He also made Lhasa the region’s administrative center.
In 1705, Lha-bzang Khan, the ruler of the Khoshut tribe, conquered the Tibetan capital. After that, the city’s residents asked the Choros clan to help them. The Dzungar ruler sent an army of 7,000 cavalries led by Tsering Dondup to defeat the invader. Lha-bzang Khan’s army was defeated during the battle, and the winner took over the city. In 1951, monks were the main residents of Lhasa. There were roughly twenty-five thousand monks in the city. The nearby monasteries provided shelter for almost fifteen thousand Chinese people. In the 60s of the 20th century, Tibet changed its administrative status and became a provincial division of the People’s Republic of China. Copyright www.orangesmile.com
The Drak Yerpa Monastery is one of the main sacred shrines in Lhasa. Why is this place so special? Great Padmasambhava spent time meditating in this monastery in the past. His wife was meditating with him. When the couple left the monastery, the sacred building became one of the main treasures in the city. Drak Yerpa consists of numerous caves, in which monks meditate, and the central temple. The caves were made in this area before the emergence of Buddhism, but the monastery has always been a Buddhist one. 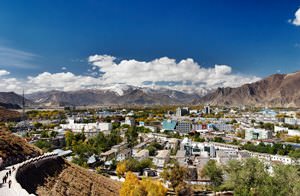 According to local legends, Tibetan hero Gesar visited the monastery in the past. Local people still cherish stories about the legendary person. There is a hole in a rock that reminds us of the hero. The legends say that Gesar shot an arrow in the rock and made that hole. Over the years, three hundred monks lived in Drak Yerpa. They were not only meditating here but also maintained the building. The Cultural Revolution in China caused some damages to the temple, but the monastery was thoroughly restored once it was over.
In Lhasa, tourists can visit a beautiful museum – the Potala Palace. All year round, thousands of Buddhist pilgrims arrive here in order to perform “kora”, a special ritual circuit. There are ritual drums along the route of the kora pilgrimage. The history of the palace started in the first half of the 7th century. Initially, a pavilion for meditations appeared on the site of the palace that we can see nowadays. The Tibetan king of that time, Songtsen Gampo, felt calm and peaceful in the pavilion, and so he decided to turn it into a big palace. 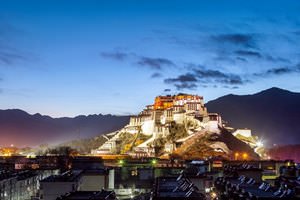 He ordered to build Potala that had almost one thousand rooms. However, nature damaged the palace – a lightning strike caused a fire that destroyed all wooden parts of the palace. The Potala Palace got its current look in the mid-17th century after extensive restoration. The 5th Dalai Lama, who was the ruler at that time, ordered to restore the building and made it his residence. Visitors are welcome to visit the grave of the 3rd Dalai Lama, but this is possible only together with a guide who is a local monk.
To get to Lhasa, tourists usually fly to a big Chinese city first. Flights to Beijing, Shanghai, and Guangzhou are the most popular. There are daily flights to the capital of China from many countries of the world. Having arrived in any of these cities, tourists can choose a flight directly to Lhasa. Airplanes arrive at Lhasa Gonggar Airport. After that, tourists can reach the city center by public transport (buses) or call a taxi.
This guide to iconic landmarks and sights of Lhasa is protected by the copyright law. You can re-publish this content with mandatory attribution: direct and active hyperlink to www.orangesmile.com.

City tours, excursions and tickets in Lhasa and surroundings

Sights around Lhasa from our guide 'Extreme places on Earth' 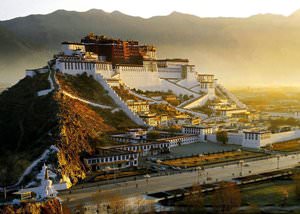 Distance from Lhasa center - 5.7 km.
According to the historical data, the construction of the palace complex began in 1645 under the direction of Dalai Lamas V. The construction of the White Palace had already been completed three years later. The architecture of the castle complex is unique and consists of the numerous buildings, steep stairs and terraces of the incredible combination. It is no wonder, as the best masters from Tibet, China and Nepal were invited to build the palace in the 17th century. The visitors of the palace can stroll through the spacious pavilions and pre-mimic the dwelling-houses that once belonged to the teacher and regent Dalai Lamas. On the territory of the castle complex is also the famous Fa-Vana Cave - an important Buddhist sight. … Read further

Search touristic sites on the map of Lhasa

Sightseeing in regions nearby Lhasa

Darjeeling
The premium quality tea is, consequently, the most expensive one and is harvested in April. If you smell this tea, you will notice that it perfectly combines scents of rode and honey. The second harvest has a distinctive taste, and so many gourmets prefer this tea variety to others. The tea harvested in autumn is less fragrant but it is stronger. An excursion to the “tea ... Open »
Bhaktapur
Bhaktapur is a scared region situated not far from Katmandu. This settlement was the largest town in the three Newa kingdoms. Bhaktapur is internationally acclaimed for its ancient architectural landmarks. Some call this region the land of potters and craftsmen. This is the primary sightseeing destination in the Katmandu Valley. Tourists from all over the world come here to see ... Open »
Kathmandu
In order to get to the stupa, tourists need to walk three hundred and sixty-five steps. Doesn’t this number sound familiar? This is exactly the number of days in a calendar year. While going up the stairs, people need to think of their actions during the last year. There are many monkeys in this stupa became monks feed them. That is the reason why Swayambhunath is sometimes ... Open »
Patan
Lalitpur, formerly known as Patan, is a miraculous city five kilometers away from the capital of Nepal. This is the third-largest city in the country after Kathmandu and Pokhara. Lalitpur enjoys a fabulous location in the Kathmandu Valley. This is a region with numerous Buddhist pagodas and Hindu temples. In recent years, Patan has become a major center of culture and religion ... Open »
Dhaka
In order to get to the temple, visitors need to go through tall gates. The gates are really tall – in the past, an elephant could easily move through them. A pond in front of the main building underlines the elegant beauty of the temple. In the east part of the gorgeous complex, tourists will find a cemetery – priests and monks of the temple were buried here previously. ... Open »
Kolkata
In 1906, Prince of Wales put the first stone in the foundation of the future memorial. The building features Italian-inspired architecture with some decent eastern motifs. The top of the Victoria Memorial has a decoration, a bronze Angel of Victory that looks like he is flying above the city. Would you like to learn more about the culture of Kolkata? Visit the museum that ... Open »

All about Lhasa, China - sightseeings, attractions, touristic spots, architecture, history, culture and cuisine. Prepare your trip together with OrangeSmile.com - find out the 'must see' things in Lhasa, which places to visit, which excursions to take, where the breathtaking views are waiting for you. Planning your trip with this travel guide will help your to get the most out of Lhasa in few days.