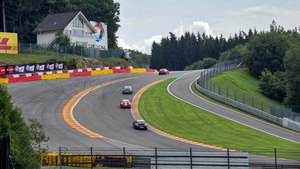 Spa is rich in symbolic historical attractions. One of the most significant ones is Poûhon Pierre-le-Grand. Peter the Great spent several weeks at the resort in 1717 and stayed exactly at this pavilion. Before his departure, near the spring the big marble slab, on which the words of appreciation on behalf of Peter the Great had been graved, was placed. In 1880, the pavilion was reconstructed. There is a beautiful winter garden near the pavilion that is decorated with sophisticated canvasses of outstanding artists.
Family holidays with kids in Spa. How to entertain your child, things to show to children.
Spa is not the place where it will be interesting for children who are accustomed to modern gadgets and entertainment. It is a balneological resort, oriented to adults for many centuries. …

Open
Each spring has its interesting history. For instance, in the middle of the 17th century Source de la Géronstère was constructed on donations of the Burgsdorf count. The count spent several months at the resort and was healed from few diseases. The luxurious pavilion built on his funds became the best gratitude to the welcoming resort. One of the very interesting historical monuments is Pouhon Prince de Condé. It was found by the local pharmacist in his own cellar in 1863. This pharmacist’s sudden find allowed people from all over the world to enjoy the healing spring water. Since the middle of the 19th century, thousands of bottles with healing water have been exported to different countries annually. The spring has been recently decorated with a new pyramidal pavilion built of glass and resembling a huge sparkling crystal.
Ancient springs are not the only historical pride of Spa. Excursion enthusiasts should certainly walk along the streets and admire historical constructions surviving. A lot of magnificent constructions built in different ages are situated close to De l’Hôtel de Ville. Copyright www.orangesmile.com
Cuisine of Spa for gourmet with top restaurants and cafe
Spa cuisine is formed under the influence of French, German and Dutch cooking traditions. The French desire for maximum beauty of the dish and sophistication in serving is present in the …

Open
Exactly here, the building of the old town hall, Hôtel de Ville, is located. Initially, in the beautiful building built in 1868 there was one of the most upscale hotels of the town. High officials and representatives of royal families stayed here. Throughout its history, the building's status changed several times. It turned into fabric in a specific time period and then served as school. Since 1941, the building has been used for administrative needs of the town. 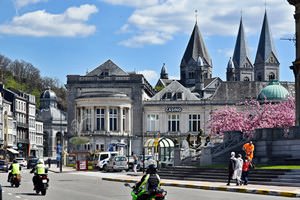 The most visited cultural center of Spa is Casino de Spa. This large leisure center was finally built in 1929. The modern casino was constructed on the foundation of the old one that was completely destroyed during the war. Besides playrooms, the modern casino is a location of the small library and the theater. The most luxurious rooms are used for organizing official ceremonies.
Authentic traditions, festivals and lifestyle of Spa inhabitants
The autumn stage of Formula 1 is one of the most popular events taking place in Spa. The Belgian Grand Prix is held at the Circuit de Spa-Francorchamps. This track is very famous in the …

Open
Near it, you can see another attractive historical monument, Thermes de Spa. These old thermae were built in 1868. At present, the thermal center is closed and prepared for extensive reconstruction, after which it will be used as a luxurious hotel. There are also interesting religious attractions, among which Church of Our Lady and Saint Remacle, Église Notre-Dame et Saint-Remacle, is noteworthy. The first religious construction appeared at this place in the 15th century. The church which the resort guests can admire today dates back to the second half of the 19th century. The main historical artifact kept in the Romanesque church is the sculpture of Saint Remacle. According to the historical data, it was brought to the town in the 16th century.

In the section below, you can get one of our excursion, activities or city discovery tours over Spa and surroundings. Our website offers 10-30% lower ticket prices, when compared to the offline purchase on the spot.

This guide to cultural sights Spa is protected by the copyright law. You can re-publish this content with mandatory attribution: direct and active hyperlink to www.orangesmile.com.
Spa - guide chapters 1 2 3 4 5 6 7 8
Reference information
Map of all churches

Cathedrals and basilicas near Spa
♥   Basilique abbatiale de Notre-Dame du Val-Dieu, Aubel, 23.3 km from the center. On the map

♥   Cathédrale Notre-Dame-et-Saint-Lambert, Liège, 26.7 km from the center. On the map

♥   Kaiserdom Unserer Lieben Frau, Aachen, 35.1 km from the center. On the map

Unique spots in Spa and near 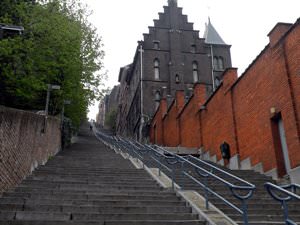 Distance from Spa center - 26.7 km.
Guests of Liege, who are not lazy to walk to the end of the stairs, will have an opportunity to admire not only unique historical sights. From the historic district, a wonderful panoramic view of the Maas river opens. Walking on the stairs will be comfortable and pleasant even for those who do not like long walks. On the stairs in certain places beautiful shops were established, where you can always relax. There is a cult place of interest in Liege with the official name "Buren Mount", it was named after the nobleman Vincent de Buren, who played an important role in the defense of the city. … Read further

Distance from Spa center - 34.1 km.
It is noteworthy that Baumwipfelpfad tower does not harm the unique nature reserve, and also helps to keep its pristine beauty. Tourists move on the ground covered with wooden bridges and don’t trample the soil, otherwise considerable damage to the park would be caused because of the huge number of visitors. The dome tower has an amazing secret. Three huge fir trees grow right inside of it. Visitors can see the composition in all its glory while climbing up. … Read further

Photogallery of cultural heritage of Spa

Excursions over cultural sights of neighbours of Spa

Liege
Many legends and stories are associated with the Church of Saint James. The church features the luxurious decoration of its halls. Visitors can enjoy the ingenious stained glass windows of the 16th century and the majestic paintings on the walls. The ancient statue of the Virgin Mary is also set there. It is made of wood and dates back to the 1523. Among culture establishments ... Open »
Aachen
Those tourists, who want to see more sights of the city, should certainly go to the old town of Monschau located near Aachen. Many years ago excellent woolen mills were the main attraction of this town. Today Monschau attracts fans of eco-tourism. The reason for this fact is simple - a beautiful park Nationalpark Eifel is located just near the town. A part of the reserve is ... Open »
Maastricht
Sint Servaasbrug bridge is a perfect place for walking. It offers unforgettable panoramic views of the city. The bridge is located near the historic quarter of the city, where travellers can also see numerous interesting buildings and monuments. A walk in an underground maze remains one of the most interesting excursions in the city. The maze is located in the western part of ... Open »
Kerkrade
One of the oldest historical monuments in the region is Rimburg Castle located near the eponymous town. The very first fortress was built on its site in the 12th century but over the years it has been heavily destroyed several times. The last time the castle was completely restored at the end of the 19th century, it is now surrounded by a wide moat filled with water. Near the ... Open »
Namur
The city has preserved many interesting religious monuments. Église Saint-Loup is located in the very heart of the city. This church was built in the middle of the 17th century as a single complex with a Jesuit college. It took more than 20 years to build the wonderful baroque church. Sandstone served as the main construction material. Since its founding, the church has ... Open »
Monchengladbach
One of the most unusual culture centers in the city is Museum Abteiberg. It is situated in a beautiful old building on the hill. It has been recently reconstructed and is open to visitors now. Its old halls house the rich collection of pieces of art, including the works of past centuries, as well as modern masters’ masterpieces. During the excursion to the museum, you can ... Open »

Culture guide to Spa. Which fascinating sights to visit once you are in Spa: temples, churches, museums, theaters and castles. Recommendations (with addresses, phone numbers and links) on the places 'must visit' in Spa. Plan your own city excursion by using this page info!