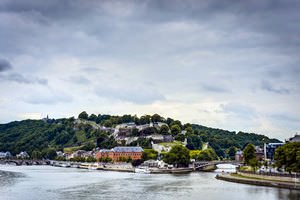 The main historical symbol of the city is La Citadelle de Namur. The very first fortification in its place was erected back in the 3rd-4th centuries by the Romans. The bastion built by them is located in a strategically important area. Over hundreds of years, the castle has been repeatedly destroyed and rebuilt but never lost its original purpose. In the middle of the 19th century, the castle underwent the last major reconstruction, after which it began to be used as a military base of the Belgian army. During the Second World War, the fortress was re-equipped again - the main innovations concerned the arrangement of its underground part. Air conditioning and anti-gas systems were installed in the dungeons. Such technologies were one of the most advanced for the 40s of the last century. Now the castle is open for tours, during which its visitors are told about the most significant battles it has ever experienced.
Your active city break in Namur. Attractions, recreation and entertainment - best places to spend your day and night here
Namur is a great vacation destination for those who like picturesque natural beauties. The city and its immediate surroundings have many beautiful places to explore. Many interesting hiking …

Open
The city has preserved many interesting religious monuments. Église Saint-Loup is located in the very heart of the city. This church was built in the middle of the 17th century as a single complex with a Jesuit college. It took more than 20 years to build the wonderful baroque church. Sandstone served as the main construction material.
Since its founding, the church has preserved many pristine architectural elements, as well as interior decoration features. We can see preserved Jesuit signs on its facade and stunning works of art adorning the interior of the church. When decorating the temple's interior, they used rare red and black marbles. Skillful woodcarving is of particular interest. The church features beautiful religious paintings created by talented students of Rubens. Quite recently, the ancient temple has received the status of a cultural center. Church services, exhibitions, and concerts are held here regularly. Copyright www.orangesmile.com
Advices to travellers: what you should know while being in Namur
1. Namur does not have its international airport but has a major railway station. Most often, it serves trains from Brussels, Luxembourg, and Paris. From the French capital, the city can be …

Open
In the immediate vicinity of Namur, you'll find the ancient Abbaye de Floreffe, which is of equally great value from historical and architectural points of view. The abbey was founded in 1121 and has undergone many changes and expanded significantly in the next 200 years. Several monasteries were founded during this period, and some of them have survived to the present day. Throughout its existence, the abbey has survived many destructive wars. The most difficult were the 14th-15th centuries. However, it was always possible to restore it quickly, so the abbey never lost its original power. 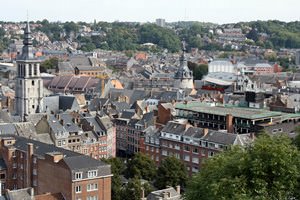 During the years of the revolution, the abbey was looted and lost almost all of its values, the monks were expelled. The abbey managed to return its former status only in the middle of the 19th century. Soon it was transferred under the auspices of the local diocese. In the 20th century, several new buildings were added to the abbey, which now house a seminary. Such transformations made it possible to visit the historic site as part of guided tours. For guests of Namur, the abbey became one of the most interesting attractions. On its grounds, they often hold fairs and festivals dedicated to historical traditions. Of particular interest is an old farm located here, which produces beer and cheese. It is important to note that tours of the abbey are only conducted from April to September.
Extraordinary weekend in Namur - unusual places, services and attractions for travel gourmet
…

Open
No less interesting from a historical perspective is the Rochefort Abbey founded in 1230. It operated as a convent in the first half of the 13th century, and at the end of the 15th century, the monastery was reorganized for men. During that period, it was one of the richest in the region. The monastery had vast lands and even a large marble deposit on its territory. Periods of the abbey's prosperity alternated with periods of decline. Such a complex history did not prevent it from remaining functioning for all these years. 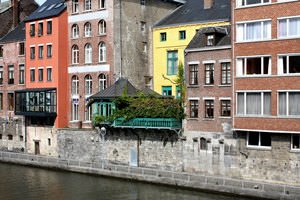 A brewery founded on the territory of the monastery in 1899 remains active even today. Currently, there is very strict discipline in the monastery, so it is closed to visitors. Tourists are invited to stroll through the picturesque surroundings and appreciate the panorama of the monastery from the nearby viewpoints. Namur's historic district is perfectly preserved so walking around it will please all fans of medieval streets. Here you can stroll through beautiful old squares and admire buildings of the past centuries. Many of them are presently occupied by interesting shops and restaurants.

In the section below, you can get one of our excursion, activities or city discovery tours over Namur and surroundings. Our website offers 10-30% lower ticket prices, when compared to the offline purchase on the spot.

This guide to cultural sights Namur is protected by the copyright law. You can re-publish this content with mandatory attribution: direct and active hyperlink to www.orangesmile.com.
Namur - guide chapters 1 2 3 4 5 6 7 8 9
Reference information
Map of all palaces

Public palaces near Namur
♥   Palace 'Egmont Palace' Brussels, 54.8 km from the center. On the map

Cathedrals and basilicas near Namur
♥   Sanctuaire Notre-Dame-de-Foy, Foy-Notre-Dame, 25.9 km from the center. On the map

♥   Basilique Saint-Materne, Walcourt, 39 km from the center. On the map 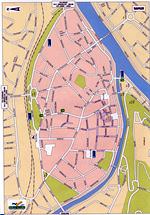 Photogallery of cultural heritage of Namur

Excursions over cultural sights of neighbours of Namur

Leuven
The main symbol of Leuven is located in the heart of the city; the old Town Hall, Stadhuis, is a true example of the so-called ‘Flamboyant Gothic.’ Construction of the building began in the first half of the 15th century and lasted for 21 years. At first glance on the town hall, the name of the architectural style is understood. Narrow carved windows that adorn the facade ... Open »
Liege
Liege is known as a major industrial city, however its rich cultural heritage is priceless. The Palace of the Prince-Bishops built in the beginning of the 11th century is considered the most significant architectural landmark of the city. The last major reconstruction of the palace was held in 1526. The appearance of the palace has scarcely changed since that time. The palace ... Open »
Brussels
Travellers will get introduced with the history of the city in Civic Museum, the collections of which include numerous historical artifacts and art objects. The museum is located in a beautiful historical building that features Gothic Revival style. Young visitors will also find much interesting in visiting another cultural institution - Museum of Natural Science. Among the ... Open »
Mechelen
The starting point of most sightseeing routes is Grote Markt. This historic square is striking in its calm atmosphere, it is never too crowded here, so nothing prevents you from admiring the historic buildings around it. Several restaurants and cafes located nearby always set their tables outdoors in the warm season. The city's most important holidays and festivals take place ... Open »
Spa
The most visited cultural center of Spa is Casino de Spa. This large leisure center was finally built in 1929. The modern casino was constructed on the foundation of the old one that was completely destroyed during the war. Besides playrooms, the modern casino is a location of the small library and the theater. The most luxurious rooms are used for organizing official ... Open »
Maastricht
Sint Servaasbrug bridge is a perfect place for walking. It offers unforgettable panoramic views of the city. The bridge is located near the historic quarter of the city, where travellers can also see numerous interesting buildings and monuments. A walk in an underground maze remains one of the most interesting excursions in the city. The maze is located in the western part of ... Open »

Culture guide to Namur. Which fascinating sights to visit once you are in Namur: temples, churches, museums, theaters and castles. Recommendations (with addresses, phone numbers and links) on the places 'must visit' in Namur. Plan your own city excursion by using this page info!