Video of flights over top monuments of Singapore City in HD format.
Use 'Full Screen' mode.
Of course, in order to feel the magnificent atmosphere of Singapore City, one needs to visit this place, walk on charming streets of the historical center, visit local cafes, and enjoy the look of the local landmarks - Sultan Mosque, Old Supreme Court, Merlion , Fullerton Hotel, Floating Stadium and many others. In order to make your virtual tour to the city more interactive, we offer an unusual opportunity to fly over every notable landmark of Singapore City. Simply start the video, and use the full-screen mode. Each landmark comes with extra information, containing a collection of interesting facts and a photo gallery. Let’s go! 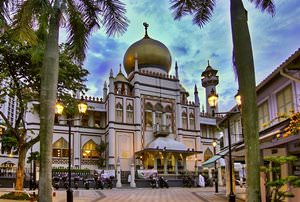 Facts:
» The Sultan Mosque is the oldest of surviving mosques in the city and one of the most important mosques in Singapore.
» The mosque accommodates 5,000 worshipers and is intended only for Muslim men; women pray in the gallery on the 2nd floor.
» The Sultan Mosque remained unchanged since its construction, even though the Second World War. During existence of the mosque, only the main hall was a subject to repair in the 1960s and in 1993.
» The Sultan Mosque became a national monument on 14 March 1975.
» Two domes and four minarets of the mosque show Arabic style with a touch of Moorish features. The roof of the mosque is framed with 40 spires featuring the same shape as minarets. 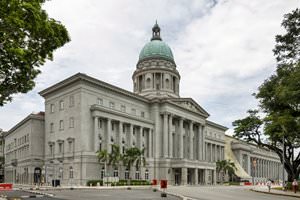 Facts:
» The Old Supreme Court is one of the most spectacular classical buildings in Singapore constructed in 1930. It became the last building erected in the country during the rule of Britain.
» The Old Supreme Court building is made of white stone and topped by a tower with a turquoise dome. The facade of the building is decorated with numerous columns of white travertine.
» The amazing bas-relief of the Italian sculptor Augusto Martelli decorates the front. It portrays Justice, the central figure is traditionally holding a sword and scales, but isn’t blinded by a bandage.
» You can see the building not only outside, but inside. The building constantly hosts art exhibitions and tours.
» It was planned to open an art center in the old building of the Supreme Court. 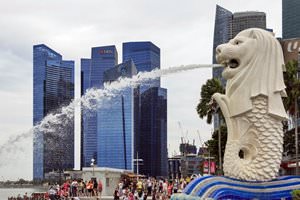 Facts:
» Merlion is the fountain built in 1964 by the famous designer Fraser Brunner. The fountain is constructed in form of a creature with lion's head with a fish's body sitting on a wave.
» Merlion is the symbol of Singapore.
» The original 70-ton statue that reaches a height of 8.6 meters is located near the mouth of the Singapore River.
» The lion's head is a symbol of opening of Singapore, as described in the Malay historical chronicle. Singapore literally means the Lion’s City. And if we talk about the fish body of the statue, it symbolizes the ancient settlement called Temasek, a small fishing village, where the history of Singapore was started.
» This statue occupies a prominent place among the major attractions of Singapore. Merlion was opened in September 1972 and since then welcomes all visitors of Singapore. 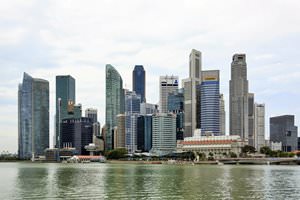 Facts:
» Fullerton Hotel is the unique architectural attraction of Singapore.
» The former post office was renovated and transformed into an upscale hotel that was opened in December 2001.
» Impressive neoclassical facade of the building was completely preserved, but the interior of the former post office was transformed into spacious, comfortable, elegant and comfortable rooms featuring contemporary design.
» The hotel has two restaurants. One of them offers visitors to taste Asian cuisine, while the second serves Italian cuisine.
» Hotel guests can enjoy the local fitness center, gym, and a massage parlor or listen to live music.

Facts: » The Floating Stadium is the stadium located on a floating platform in Marina Bay in Singapore.
» The Floating Stadium is the world's largest floating stage.
» The platform supports the weight of up to 1,070 tons; stands on the beach can accommodate 30,000 spectators.
» The Stadium is the venue for various events such as sport cups, exhibitions, concerts and other cultural festivals.
» Between stands and the stadium there is the section of Formula 1 Marina Bay. Stands are actually a part of the rostrum slopes and are also used during the Gran of Singapore and other races.

CONTINUE - PART II »»
This guide to architectural sightseeing in Singapore City is protected by the copyright law. You can re-publish this content with mandatory attribution: direct and active hyperlink to www.orangesmile.com.
Singapore City - guide chapters 1 2 3 4 5 6 7 8 9 10 11 12 13 14 15 16 17

City tours, excursions and tickets in Singapore City and surroundings

Build your walking routes in Singapore City on the landmark map

Architectural landmarks in the regions around Singapore City

Kuala Lumpur
The Petronas Towers are the highest twin towers in the world. They have 88 floors and are 452 m high. According to the project, the buildings feature a huge size and a complicated structure. Their foundation is 100 m beneath the ground and is the deepest in the world. The towers are connected by a glass bridge that is situated at a height of 170 m. There is also an observation platform. As the towers swing, the bridge joint with ball bearings ... Open »
Jakarta
The Arabic name of the mosque is “independence”. It gained its name in commemoration of freedom from Dutch domination. Masjid Istiqlal was built at the site of the former fortification in the middle of the 19th century. In 1955, the contest on design projects was won by a Christian architect. The construction lasted 17 years. The new building was officially built in 1978. It accommodates up to 120 thousand people. The main building has a ... Open »
Bangkok
The Grand Palace is the Bangkok's most famous landmark. The palace consists of several buildings, occupying an area of 218 thousand m2 and is surrounded by four walls of 2 km long. The Grand Palace served as the residence of the Kings of Thailand. Its construction began during the reign of King Rama I in 1782. There are various government offices, temples and the Royal Library in the palace. In addition, many galleries of the palace are ... Open »
Hanoi
The Hanoi Cathedral of St. Joseph was built in 1886 on the site of a very ancient and ruined Buddhist pagoda. The the vicar of the church, Paul Francois Puginiier, petitioned the construction of the Catholic church in front of the French administration. The cathedral was built in two years. It resembles the French Cathedral of Our Lady of Paris. Two bell-towers 31 m high are equipped with five bells each. A very beautiful interior is ... Open »
Hong Kong
It’s a modern memorial built in 1993 in the form of a large seated statue of Buddha that is 34 metres high and weighs 250 tons. To get to the statue, you need to climb 268 steps. There’s a temple inside. The first floor decorated with paintings of the Buddha’s earthly life houses the Hall of Benevolent Merit. The second floor has a wooden panel depicting 160 pairs of eyes conveying different human emotions. The third floor houses the Hall ... Open »
OrangeSmile.com - online travel reservation expert providing reliable car rental and hotel booking services. We feature more than 25.000 destinations with 12.000 rental offices and 200.000 hotels worldwide.
Secure Server