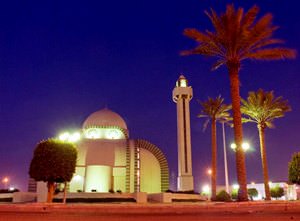 The cuisine of Saudi Arabia was formed under the influence of the nomadic lifestyle of the peoples inhabiting the Arabian Peninsula, the climatic features of the region, and religion. The country's cuisine is subject to religious canons. This means that the food must be Halal. Animals must be killed in a special way. Eating the meat of animals that have died of natural causes is not allowed. It is forbidden to eat pork and meat of predatory animals. The local cuisine is one of the oldest in the world. It has incorporated the culinary traditions of other peoples of the region. In particular, this is due to the long period of stay in the Ottoman Empire. Some dishes can be found in other regional cuisines but with alternative names.
Saudi Arabia cultural sights. What to see?
Historically, Arab tribes lived on the territory of the Arabian Peninsula. Many of them led a nomadic lifestyle. The prophet Muhammad, the founder of …
Read further
Lamb and chicken are consumed from meat products. Beef is less common here. Rice and wheat are popular from cereals. Milk and dairy products are consumed here. However, non-Halal products should not be used in their production. Spices are extremely widely used in local cuisine. They are generously, sometimes too much, put in different dishes. Onions and garlic are also widely used.
Bread is loved very much here. It is always present on the table. Khobz, Khmer or aiz bread is baked from different types of flour. Pita cakes are also served on the table. Different fillings are often wrapped in them. Lafa is the same as pita. Street food shops are popular here. Lafa with different fillings are sold there. Markuk is a thin flatbread baked in a pan. The table is often served with pies with different fillings: cheese, meat or spinach. One of the most popular dishes in the month of Ramadan is made from bread soaked in meat broth. It is called Sarid. Murtabak is a kind of thin omelet in which different fillings are wrapped. It is cut into squares. Copyright www.orangesmile.com
Things to do in Saudi Arabia - active leisure
Strict observance of religious dogmas affects the lives of citizens of Saudi Arabia. Many things that are common to Europeans are considered depraved …
Read further
Many popular meat dishes are cooked over coals or a frying pan. There are a huge number of variations on the theme of kebab. It is prepared from various types of meat, except pork. Ordinary meat on a spit is also popular. Cutlets from minced meat are called kefte, as well as in Turkish cuisine. An unusual dish is prepared using fat from sheep tails. Arisa hearty dish consists of ground wheat, butter, and meat. All ingredients are crushed after cooking. Spices are also added. The dish is decorated with greens. The traditional kabsa dish has several varieties. It is prepared from meat, rice, vegetables, and spices. Chicken, goat or camel meat, and fish can be used. Spices, as well as nuts and raisins, are often added to the kabsa. The dish is eaten by hand from a bowl. Some of the dishes came to the national cuisine from other national cuisines: shakshuka, shawarma, masgouf, and others. 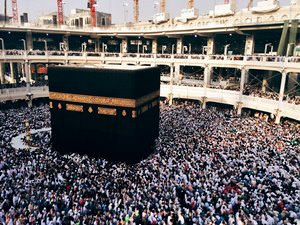 Dishes prepared in a tandoor (special oven) are delicious and unusual. First, the meat is boiled with spices, and then it is hung in a tandoor over embers for cooking Mandi. The dish is prepared in a closed oven. Meat cooked in this way is used in other dishes or served as an independent dish with sauce.
What you need to know about Saudi Arabia prior to visit - advices
1. Saudi Arabia is a country of strict rules. The norms of behavior are subject to religious dogmas here. Even if a rule is not legally established …
Read further
Side dishes and salads are served with meat dishes. Fattoush salad is made from tomatoes, cucumbers, and lettuce. Herbs, lemon, and olive oil are also added. The salad is seasoned with sumac spice, popular in the East. Sometimes stale unleavened tortillas are added to it. Tabule is a traditional salad for many Eastern countries. It is prepared from a large number of finely chopped greens, tomatoes, cucumbers, onions, and wheat. Bean pasta and snacks are one of the features of the national cuisine. Hummus is made from crushed yellow peas. It is seasoned with sesame sauce. Ful is a puree of beans, garlic, and lemon. Falafel is fried balls that are made mainly from chickpeas. The locals are also very fond of meat and vegetable thick soups-puree. 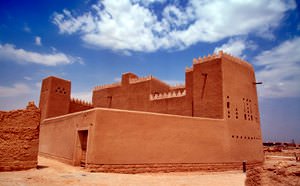 Baklava that came from Turkish cuisine is widely spread from desserts. Kunafe is dough envelopes filled with cheese and sweet syrup. Muhallabia is reminiscent of rice pudding with pistachios. Basbousa is a sweet cake. Candied fruits and nuts, brittle, and honey doughnuts are also often served on the table.
What to see and what to visit in Saudi Arabia with children
The best resorts and beaches in Saudi Arabia are located on the Red Sea coast. Infrastructure is being created and tourist access to the region is …
Read further
Alcohol is officially banned in Saudi Arabia. The locals love coffee. They drink it in huge quantities. Coffee is drunk from small cups, adding cardamom, nutmeg or cloves. According to the rules of good taste, coffee beans are fried, crushed in a mortar and prepared in a cezve with a guest. It is supposed to offer coffee to guests at least three times. It is customary to serve the drink by seniority. Tea is also a popular drink. The locals mostly prefer black tea. They add herbs to it. Laban drink is made from yogurt. It can be sweet or salty. The sobia drink is often consumed during the month of Ramadan. It is prepared from bread and juice of the date palm. Jallab fruit syrup is more like an independent dessert than a drink. It is served with ice, raisins, and nuts. Saudis eat twice a day: in the morning and in the evening. Many dishes are eaten by hand or picked up from plates using bread.

This article about national cuisine of Saudi Arabia is protected by the copyright law. You can re-use the content, but only under the condition of placement of an active link to www.orangesmile.com.
Saudi Arabia guide chapters 1 2 3 4 5 6 7 8 9 10 11

Cuisine and restaurants in popular cities of Saudi Arabia

Riyadh
Spicy snacks, hot pastry, original rice dishes and traditional candies will please taste of even the most fastidious gourmand. The Piatto restaurant specializes in Italian cuisine. Its hall is decorated in a modern style, tuning its guests for a good relaxation and rest. One of the peculiar features of the Piatto eating house is an opened kitchen offering the guests to watch restaurant cooks creating their culinary masterpieces. In addition to original fresh salads guests will have a chance to … Read more

Jeddah
Fans of oriental coffee and delicious desserts will simply fall in love with Cafe Aroma. Here they can relax after long and interesting walks around the city and enjoy original sweets and coffee. The coffee shop is wonderful choice for families. Connoisseurs of "hotter" food should definitely visit Chilli's restaurant. Every dish in this restaurant is spicy and has a very unique taste. In the menu of the restaurant visitors will find popular fish dishes and various meat delicacies. Make your … Read more

Medina
The most favorite drink among townspeople is coffee, and its more original version is called "Hirsch". This drink is a decoction brewed from coffee husk. It tastes like weak coffee mixed with tea. An important component of local cooking is “sambusa” - this is how they call various types of savory filled pastries. Such pastries can be tried at every step: they are served at all local restaurants and cafes, sold in ordinary street food stalls. Sambusa with cheese and herbs is very popular … Read more