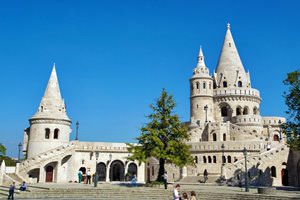 a hotel museum. This residence is a member of the Historic Hotels of Europe Association. The building of the hotel was constructed 700 years ago. Later it was rebuilt many times and then finally opened under the name Fortuna Inn at the end of the 17th century. A hundred years later, in 1785, the city’s authorities decided to reconstruct the building, so the façade of the hotel was made in the Baroque style that was trendy during that time. The façade hasn’t been ever changed since then. During the wars with Napoleon, the Fortuna Inn hotel was the center of life for the high society. During the latest renovation, the hotel’s original frescos and fretwork were carefully restored, as well as the genuine glazed tile stoves, original décor of the bar and restaurant. A giant, over a century old chestnut tree and vine climbing up the façade are also carefully preserved.
Danubius Hotel Gellert
Check on the map. From Budapest center - 2.9 km
A beautiful, respectable and trustworthy hotel, Danubius Hotel Gellert

was open in September 1918. The hotel is combined with the internationally famous bathhouse that is named after Saint Gellert. The hotel is built near the thermal spring that has been known for more than 2000 years. The beautiful design of rooms is perfect for relaxation in peace and harmony after the healing treatments. Guests of the hotel can enter the baths for free. The Panorama restaurant is another advantage of this tremendous hotel. From April till November, a gipsy orchestra performs at the restaurant, entertaining its guests on evenings. Subtle flower fragrance and refreshing wind from the Danube only make it even more pleasant for travelers to stay at this wonderful historic hotel in Budapest. Copyright www.orangesmile.com
Four Seasons Gresham Palace
Check on the map. From Budapest center - 2.5 km
The history of Four Seasons Gresham Palace

starts in the beginning of the 20th century. The British businessman, Sir Gresham, built a house for an insurance company, and even at that time the building attracted and charmed residents of Budapest with its unparalleled beauty – towers with steeples, tall columns, bay windows and high arcs. Sometime after its opening, foreign ambassadors, local noblemen, and even internationally famous people chose to stay there. After the last war, the building looked quite pitiful. Architects and designers, who were involved in the restoration of the hotel, worked carefully in order to keep the unique Hungarian majolica, ceiling fretwork, and wall décor. The fantastic result of their work can be now seen at the modern Four Seasons.
Best hotel choice for romantic escape, wedding or honeymoon in Budapest
Petnehazy Hotel Club is a great destination for a family travel or a romantic vacation. The hotel complex consists of the main building and 45 cottages made in Swedish style. The hotel club …

, was built as Adria Palace for an Italian company in 1914. The original architectural plan of the building included both living quarters and office space. The ground floor was the location of premium shops. During the war, Adria Palace was severely damaged after the bombing. For a long time, until 1997, the building was used as a city police office, and only in 2000, after an extensive renovation, the luxurious Le Meridien Budapest was open there.
Check the hotel prices and availability

Search hotels in Budapest for your taste

Famous hotels in the region of Budapest

Vienna
Soon after the opening, Mark Twain enjoyed the hotel. Later, Hotel Ambassador received such guests as Romi Schneider, Marlen Dietrich, Prince Wilhelm Hohenzollern, and Theodor Roosevelt. The latest extensive restoration of Ambassador took place in 2010. The original décor and priceless artworks were as much preserved as possible. After the renovation, the iconic Vienna hotel ... Open »
Prague
During the long and respectful history, the hotel greeted many famous guests including musicians from the Rolling Stones. Internationally famous politicians, movie actors, and musicians visited Gourmet Club restaurant that is open in the hotel. The restaurant is mentioned in the top 10 dining destinations in Prague. It is also worth noting that ever since the opening Palace ... Open »
Venice
The opening of the hotel took place in 1958. The idea of building a luxurious hotel near San Marco Square belongs to Giuseppe Cipriani, the founder of the legendary Harry’s bar. In 1968, an important event happened in the hotel – a large, Olympic size swimming pool was opened there. Even nowadays, the swimming pool is a true gem of the Cipriani’s infrastructure. A part of ... Open »
Innsbruck
BEST WESTERN Hotel Mondschein is located on the bank of the Inn River. This magnificent hotel is a worthy competitor of the most famous hotel in the city. The hotel attracts guests by the luxurious décor of guestrooms where many furniture pieces and accessories are hand-made. The royal bathroom with décor made of rare sorts of marble and Swarovski crystals is worth a separate ... Open »
Verona
Travelers who prefer to stay in the catchiest designer hotels should pay attention to prestigious Byblos Art Hotel Villa Amista. Its present location is a wonderful 15th-century villa, the interiors of which were designed by Alessandro Mendini, one of the most outstanding designers of the 20th century. A riot of colors and their unexpected combinations, elegant soft furniture ... Open »
Florence
Travelers, who enjoy staying at resort hotels, are usually fascinated with Grand Hotel Minerva. Besides luxurious guest rooms made in pastel colors, clients of the hotel are welcome at the national cuisine restaurant and spacious terraces with panoramic views of the flamboyant historic district. The roof of the hotel has been turned into a wonderful relaxation area with a ... Open »
OrangeSmile.com - online travel reservation expert providing reliable car rental and hotel booking services. We feature more than 25.000 destinations with 12.000 rental offices and 200.000 hotels worldwide.
Secure Server