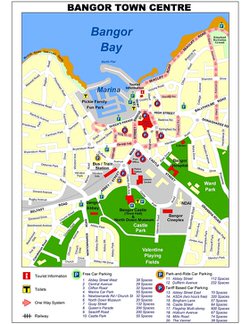 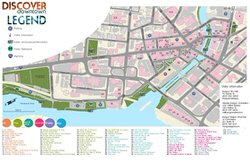 Interactive maps of hiking and biking routes around Bangor

1. You can zoom in/out using your mouse wheel, as well as move the map of Bangor with your mouse.
2. This interactive map presents two modes: 'Biking Routes' and 'Hiking Routes'. Use the '+' button on the map to switch between them.

This Bangor map has two modes: 'Railway Network' and 'Landscape & Rural Map'. Use the '+' button on the map to navigate.

Thanks to the relief of Ireland, the country was able to build a quality rail network. To date, it covers most of Ireland; absolutely all major cities are linked by rail. Trains in the country usually go at high speed. Their technical condition is also at a high level. The State regularly allocates funds for the renovation of trains and the acquisition of new wagons and trains. The wagons themselves are of two classes: the standard and the super standard (the improved first class). The cost of travel differs depending on the class of the wagon, the chosen route and direction, as well as the distance. In large cities and in the capital, suburban electric trains also run. They are designed for domestic traffic between areas of cities. Such trains run from six in the morning until midnight. The interval is about twenty minutes. … Open

Burren National Park was created to protect limestone rocks. It is built of limestone and has a very scarce plant world. The modern landscape of these lands was formed during the last icing of the planet. One can find alpine plants that are adjacent to the subtropical climate. Many sprigs make their way through the cracks in the rocks. That's why the landscape looks fascinating. The most northern national park of Ireland is Glenveagh located off the coast of the Gulf of Donegal in the county of the same name. The territory is occupied mainly by forests, valleys, and picturesque lakes. Reindeer live in the park; animals can often be found near the lakes. The valleys are covered with a dense vegetation of beautiful emerald color. The main attraction of the park is Glenveagh Castle built in the 19th century. … Open

Our guide to Bangor

Bangor is an old historic city, so sightseeing enthusiasts will definitely not get bored here. Its main symbol is the 19th-century Penrhyn Castle, which is considered a striking example of neo-Norman architecture. The castle houses several museums and most of its halls are currently open for guided tours. Beautiful historic finishes and interior elements have been preserved in some halls. Wonderful carved ceilings … Open

Interesting natural attractions and a variety of entertainment centers make Bangor an attractive tourist destination at any time of the year. To the south of the town is Snowdonia National Park established in 1951, which is considered one of the most beautiful in the region. The main attraction of the reserve is Mount Snowdon. Ascending to its top is the most popular entertainment among travelers during warmer … Open

Bangor for children - what to visit

Pickie Family Fun Park was created specifically for families. This park provides playgrounds for children of all ages. Of course, most of the entertainment is available to visitors in summer. Here, you can enjoy fountains, swimming pools, and even boat rides along a small artificial pond. Besides that, the park offers a shooting gallery, children's toy and souvenir shops, as well as a great cafe where it is nice to … Open

Most of the shopping centers and shops are concentrated in the central part of Bangor. Here you can find not only original souvenirs but also stylish clothes from leading European and American brands, as well as popular regional delicacies. Deiniol Shopping Centre is one of the largest in town. Its customers will surely appreciate a variety of fashion stores located here. Here you can pick beautiful business suits … Open

Maps of Quebec City
If you're traveling together with small tourists, then you should definitely visit Bora Parc Valcartier with its swimming pools and amazing water rides to suit every taste. It is worth highlighting the adorable design of the water park - here you can really forget that everything happens not in Bora Bora but in Canada. Relaxing after active recreation - which is sometimes ... Open »
Maps of Boston
You have visited all the cultural events and exhibitions in Boston and now feel the need for some extreme fun and adrenaline rush? Then, here are top 4 activities, which will satisfy your mind and soul. And the first thing you must do in Boston is to try skydiving with the Skydive Pepperell. It is the closest dropzone to Boston, where you can join ranks and try a 10-foot tandem ... Open »
Maps of Cambridge
Those who wish to spend time actively should be advised to visit Central Rock Gym to feel like a mountaineer experiencing indoor climbing. This is a fantastic place to spend time with family and friends. Golf enthusiasts must visit Fresh Pond Golf Course and play their favorite game enjoying stunning panoramic landscapes. At the same time, Reality Zombies welcomes all gamers ... Open »
Maps of Massachusetts
Cambridge with its lively atmosphere is recommended to travelers who prefer to devote each day to various entertainment options. It offers guests an enchanting parks John F. Kennedy and Wheeler, popular cinema Brattle Theatre, as well as many interesting shops and restaurants. Salem's most popular tourist destination is Salem Willows Amusement Park. The whole family would ... Open »
Maps of Montreal
In summer, almost all water activities are available for tourists in Montreal: kayaking, cruises, boating trips, fishing tours, and sunbathing. You can ride in a horse-drawn carriage along the embankment Vieux-Port de Montréal. Here, they run throughout the day. In Montreal, there are also several comedy clubs where their guests never stop laughing. These are “Comedy ... Open »
Maps of Ottawa
Escape Manor is the most popular escape room club in Ottawa, offering a variety of themes: mystical, spy, magical. In total, the center has fourteen rooms to choose from, so every participant will find something that floats their boats. Of no less interest is another escape room center - Jigsaw Escape Rooms, where visitors will have a great time in the role of a spy, ... Open »
OrangeSmile.com - online travel reservation expert providing reliable car rental and hotel booking services. We feature more than 25.000 destinations with 12.000 rental offices and 200.000 hotels worldwide.
Secure Server