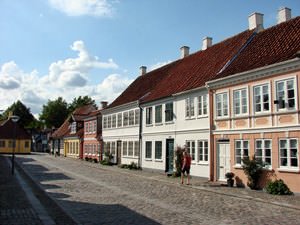 Among landmarks and sights of the city of Odense tourists will discover ancient houses and museums, majestic cathedrals and churches, scenic streets and large squares of historic significance. Odense offers exciting spots of tourist interest for every guest. Among majestic samples of architecture the Saint Knud Church is worth visiting. The church was built in the 18th century. For more than 200 years of its existence the church has hardly changed its appearance. It has preserved the initial inner decoration of the premises as well.
Family holidays with kids in Odense. How to entertain your child, things to show to children.
The picturesque city of Odense with its priceless historical sights is perfect for families with children. Many of its entertainment centers are designed specifically for kids. Lion's Den is …

Open
The church keeps an ancient gold plated sanctuary, an organ and a bishop’s throne as well as an inestimable religious artifact being the hallows of Saint Knud attracting thousands of visitors daily. Among other religious landmarks and sight of the destination, Our Lady’s Church is a must visit tourist spot as this church is a subject of many incredible legends
A single touch to the walls of the church is considered to be curing and healing from all diseases and miseries. The church is visited by people of different religious confessions. A significant symbol of the city is so called half-timbered houses. These traditional medieval buildings are still constructed following good old traditions. The half timbered houses will be appreciated by the connoisseurs of ancient architecture and will stun event unsophisticated and inexperienced tourists with their original unique style. Copyright www.orangesmile.com
Cuisine of Odense for gourmet with top restaurants and cafe
The most original eating destination of the city of Odense is the Den Smagløse Café. The eating house features upscale interior design, rich menu and high class service. After trying the …

Open
Odense is a place of birth of Hans Christian Andersen. One of the museums of the city is devoted to the creative work and life of world renowned fairy tale writer. The museum is named after the author. An exposition of the Hans Christian Andersen Museum includes a collection of ancient paintings and statues of fairy tale characters created by the author. The museum regularly holds different exhibitions devoted to ethnic crafts: tourist will have a chance to explore the brightest samples of smith craft and pottery craft as well as estimate and try hot masterpieces of local bakers. The Museum of Fine Arts will be of the same high interest for tourists and city guests. Its collection counts hundreds of paintings of Danish artists. 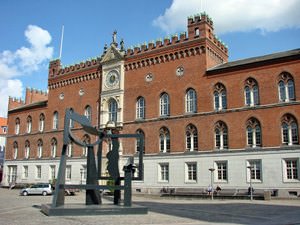 Odense offers several open air museums. The best known among them is the Funen County. The museum is located in a scenic nature area. Its exposition shows the visitors the peculiarities of lifestyle of local people. The place shows the exact copies of different buildings and constructions which were peculiar for local villages in the late Middle Ages period. Among cultural establishments the Carl Nielsen Museum is worth visiting. The museum is dedicated to the creations and life of great musician and composer. An excursion to the place will be of great interest not only for classic music admirers but as well for those tourists who like various educating events and tours.
Authentic traditions, festivals and lifestyle of Odense inhabitants
Odense is the venue for Denmark's oldest film festival - Odense International Film Festival. First held in 1975, now the festival is held annually in August. During the festival, interesting …

Open
Many sights of the city are connected with the name of Hans Christian Andersen - and this is not only the Andersen Museum. Numerous sculptures depicting characters of the writer's works are erected throughout the city. Among them are "The Wild Swans", "Thumbelina", "The Tin Soldier", "The Emperor's New Clothes", "The Darning Needle", "The Shepherdess and the Chimney Sweep". There is no "The Little Mermaid" looking at the ships in the harbor of Copenhagen. However, there are several statues of the storyteller himself - one is located next to the city's main cathedral Sankt Knuds Kirke, the other is erected right on the water, in such a way that it seems to be drowning, and a third monument can be found near the Andersen Kongres Center and the Odense Koncerthus. A restaurant located near the Andersen Museum bears its name too. 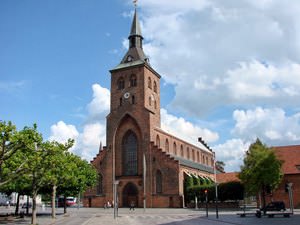 An impressive Renaissance building is the Egeskov Slot Castle that can be found in the vicinity of Odense. The fortress is also notable for the fact that it is the best-preserved Renaissance building in all of Europe. The castle standing on the water was first mentioned in 1405 and was fortified during the so-called “Count's War” at the beginning of the 16th century. It got its name ("Oak Forest") for a reason: the whole forest was needed for its foundation. The exterior of the building was created in the late Gothic style, and inside, you can find many antique items of the 16th-18th centuries, as well as priceless artworks of that time. The castle complex includes a half-timbered building with a thatched roof and a beautiful garden.
Your active city break in Odense. Attractions, recreation and entertainment - best places to spend your day and night here
Odense is a perfect destination for a family vacation and active leisure fans due to a great variety of entertaining establishments. Those tourists traveling with family should necessarily …

Open
Being interesting from an architectural and historical point of view, the castle also houses several exhibitions. Its collection includes retro cars, vintage motorcycles, agricultural equipment, aircraft, horse-drawn carts. Among other outstanding Odense museums is the Ladbyskibet, an open-air Viking museum. Here you can find a funeral ship and a boat made in 2015 in compliance with the Vikings' building technologies. In the funeral ship, visitors can see artifacts that would be useful to the deceased in the afterlife. The Living History Park is located in the vicinity of the city. 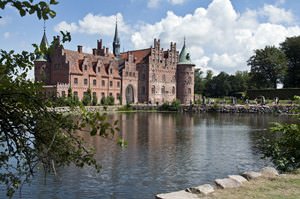 Connoisseurs of fine and sculptural art will be happy to visit the Brandts Art Museum. Interesting tours are held in the Odense Glasværk where one can get acquainted with the glass manufacturing technology the city was once famous for. It must be said that the sight is really impressive. Of great interest to tourists is the Odense Bunkermuseum, a Cold War nuclear bunker. The Fyns Militærhistoriske Museum is perfect for exploring the region’s military equipment. Together with small tourists, it is worth visiting the open-air Danmarks Jernbanemuseum with its fascinating stories about Danish trains, as well as the opportunity to climb them. However, technology and history buffs will find it interesting too.
Advices to travellers: what you should know while being in Odense
1. The optimum way of city cruising by public transport is a bus. A bus is commonly entered through a front door and tickets are bought directly from a bus driver. Travelers should keep in …

Open
The museum is in close proximity to Odense Banegård Center Railway Station, from which many tourists begin their acquaintance with the city. It is worth noting that the current station is the city's third. The first building was erected in 1865 and existed until 1914, and the second station functioned until 1995. The latter is of greatest interest from an architectural point of view. Located near the current station built in 1995, it is a wonderful example of modern architecture - functional and beautiful. When it comes to religious attractions, we can't fail to mention one more - Bellinge Kirke that was probably built in the 14th century. Inside, you can find frescoes of the late 15th century, which are considered the most important relics of the shrine. 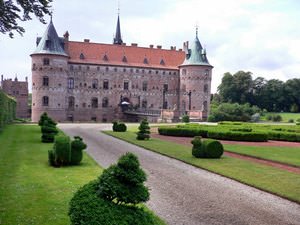 Government buildings in Hans Christian Andersen's hometown deserve attention too. The Town Hall (Odense Rådhus) was built in 1883 by the architects Johan Daniel Herholdt and Carl Lendorf who were inspired by the Gothic style. Its expansion started back in 1937 and ended in 1955 according to the project of Bent Helweg-Möller. At that time, it got a memorial plaque with the names of the great natives of the city, including Hans Christian Andersen, Karl Nielsen, Thomas Brig, Christina of Denmark and Canute IV of Denmark. Thriges Kraftcentral Power Station is now turned into a museum, the main exhibit of which is the original B&W diesel generator of 1923. Here you can also see an exhibition on the life of Thomas B. Thrige.

This guide to cultural sights Odense is protected by the copyright law. You can re-publish this content with mandatory attribution: direct and active hyperlink to www.orangesmile.com.
Odense - guide chapters 1 2 3 4 5 6 7 8
Car rental on OrangeSmile.com

Photogallery of cultural heritage of Odense

Excursions over cultural sights of neighbours of Odense

Kolding
Kolding's main historical symbol is the ancient castle Koldinghus, which is considered one of the most beautiful in Denmark. The very first defensive fortress was built on its site in the 13th century. Each new owner reconstructed and improved it with new extensions at his discretion. The fortress has preserved thick stone walls to this day. At a certain period, the castle had ... Open »
Arhus
An important historical symbol of the city is Marselisborg Palace. It was built in the second half of the 17th century and was originally privately owned. In 1896, due to large debts, the palace passed into state ownership and began to be used as a summer royal residence. The palace retains this high status to this day. In 1967, it underwent a major reconstruction. The palace ... Open »
Kiel
Today the large-scale architectural complex is surrounded by an extensive parkland. Not far from the University the Botanical Garden is located; it was opened in 1688. University staff was directly involved in setting out the garden. Today it assembles one of the richest collections of exotic flowers and plants in the country. Guests will enjoy a huge number of museums and ... Open »
Copenhagen
Copenhagen offers widest choice of interesting places for visiting to its guests. Travellers are welcome to attend excursions to the historical monuments of the city. The building of the City hall deserves particular attention. It was built in the beginning of the 20th century. This beautiful building made of red brick keeps amazing visitors by its grandeur and austerity. ... Open »
Malmo
Malmo has a tiny but quite cozy historical district which is concentrated on three major squares: Stora Torget, Lilla Torg and Gustav Adolf ones. These scenic squares will be perfect places for hiking and plenty of landmarks and sights will turn the vacation even more exciting and interesting. The main sight of the city is considered to be the building of Turning Torso. ... Open »
Lubeck
Each city sight of Lübeck is a unique historical landmark. To explore the main places of interest in Lübeck the tourists are recommended to cruise the city central streets on foot. The private residence of the 18th century named Behnhaus located in the Königstrasse is a great architectural masterpiece. Simple building with Rayonnants and traditional front side is nowadays ... Open »

Culture guide to Odense. Which fascinating sights to visit once you are in Odense: temples, churches, museums, theaters and castles. Recommendations (with addresses, phone numbers and links) on the places 'must visit' in Odense. Plan your own city excursion by using this page info!