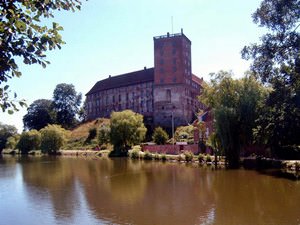 Kolding's main historical symbol is the ancient castle Koldinghus, which is considered one of the most beautiful in Denmark. The very first defensive fortress was built on its site in the 13th century. Each new owner reconstructed and improved it with new extensions at his discretion. The fortress has preserved thick stone walls to this day. At a certain period, the castle had served as a royal residence. A lush garden was laid out around it on the orders of royals.
Guide to Kolding sightseeing - things to see and to visit
Kolding is a small provincial town that is located not far away from the border with Germany. Start your observation of this place from its central street. Here you will find several large …

Open
Today, the castle houses an interesting historical museum that keeps a large collection of 16th-century furniture and artworks belonging to various periods within its walls. Of great interest are silverware and antique ceramics, as well as the museum's unique collection of handicrafts. In the warmer months, the picturesque garden surrounding the castle becomes the venue for various historical festivals and reenactments. It is always decorated with special landscape compositions in summer.
The city invites travelers to the Trapholt Museum, which introduces them to works by famous Danish artists and craftsmen. Its exposition is based on beautiful handmade furniture made by local masters for wealthy aristocrats in the 17th and 18th centuries. All pieces of furniture presented in the museum were made by hand. The museum has also gathered an extensive collection of paintings and sculptures, and some of its halls are reserved for temporary exhibitions of contemporary art. The Trapholt occupies a beautiful historic building, which in itself is a valuable architectural monument. Copyright www.orangesmile.com
Family holidays with kids in Kolding. How to entertain your child, things to show to children.
In Kolding, tourists with children will be able to organize an exciting cognitive holiday. The city has many excellent family attractions and beautiful parks. If children have a fondness for …

Open
Several unique old churches have been preserved in the city. The most famous of them include Sankt Nicolai Kirke and Kirche St. Michael. These churches were built at the turn of the 12th and 13th centuries. Over hundreds of years, they have been repeatedly destroyed and rebuilt. There is almost nothing left of the original appearance of the churches. Nevertheless, they are valuable architectural monuments of the late Middle Ages. 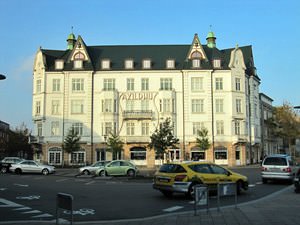 Both churches are still active and considered vivid examples of the Gothic style. An interesting collection of religious artifacts and ancient artworks is kept within the walls of each of the temples. It is noteworthy that in the late medieval period Kolding often suffered from strong fires, but the churches have never been affected. Church services are regularly held in the functioning temples.
Cuisine of Kolding for gourmet with top restaurants and cafe
Classical Danish restaurants predominate in Kolding, here you can taste traditional regional specialties. Fish and seafood, potatoes and pork dishes are available on the menu all year round. …

Open
One of the most picturesque and interesting areas of the city is the old market square Torvegade. Once the city's main marketplace was located here. Today the old square is surrounded by buildings of various periods. Here is the beautiful old Town Hall building, the facade of which is almost completely covered by wild grape vines in the warm season. The main decoration of the building is an old fresco by Otto Bache, which depicts one of the battles in the city in the 19th century. There are also many beautiful half-timbered houses around the square, most of them were built in the 16th century. Borchs Gård built in 1595 is among the most prominent ones. At the end of the 16th century, the main city pharmacy was housed in this spectacular building. 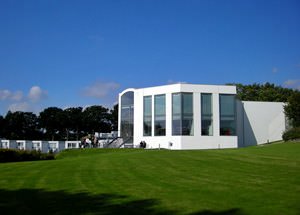 One of the most unusual attractions of Kolding is the open-air museum Miniby. It is an exact reduced copy of the city of the second half of the 19th century. Walking around the museum, one can admire beautiful old buildings, see small replicas of its iconic historical sights. It would be interesting to visit this museum in summer, as many beautiful trees and ornamental plants grow on its territory.
Authentic traditions, festivals and lifestyle of Kolding inhabitants
Local residents are very friendly people with a great sense of humor. They are not used to being in a hurry, performing all routine affairs very responsibly, as well as devoting enough time …

Open
There are also many interesting landmarks in the vicinity of Kolding. In just a few minutes drive you can reach Hindsgavl Castle dating back to the 12th century. Its first owner and founder was King Valdemar II, he was a big fan of hunting and decided to build a new residence among the game-rich forests. Over many centuries, the castle has managed to avoid serious destructions. A hotel is currently open on the castle grounds. These places attract not only fans of historical sights but also those who like walking through picturesque natural areas. Near the castle are beautiful forests and meadows, several fish-rich lakes and rivers. Interesting hiking trails are laid out in this picturesque natural location for active tourists. Everyone will have the opportunity to stay in the historic hotel and spend a few days in these unique places.

This guide to cultural sights Kolding is protected by the copyright law. You can re-publish this content with mandatory attribution: direct and active hyperlink to www.orangesmile.com.
Kolding - guide chapters 1 2 3 4 5 6 7
Reference information
Map of all palaces

Public palaces near Kolding
♥   Palace 'Gråsten Palace' , 62.5 km from the center. On the map

Photogallery of cultural heritage of Kolding

Excursions over cultural sights of neighbours of Kolding

Odense
Odense offers several open air museums. The best known among them is the Funen County. The museum is located in a scenic nature area. Its exposition shows the visitors the peculiarities of lifestyle of local people. The place shows the exact copies of different buildings and constructions which were peculiar for local villages in the late Middle Ages period. Among cultural ... Open »
Arhus
Here you can see the works of famous artists and sculptors of the first half of the 19th century, as well as a collection of works by famous modernists. Several halls are dedicated to the work of contemporary artists. Temporary exhibitions are often held here too. On the top floor, you will find a unique glass panorama created by the Danish artist Olafur Eliasson. It is ... Open »
Kiel
The City Museum (Stadtmuseum) will introduce the history of Kiel to visitors as it has an interesting collection of historical artifacts and household items. Both adults and children would be amused with tour around geological and zoological museums. The exhibition of the Historical Museum is dedicated to the most important events that citizens had to endure; the significant ... Open »
Alborg
Aalborg's most important historical symbol is Aalborg Kloster Monastery. It is located in the very heart of the city among picturesque historic streets. The history of the monastery begins in the 15th century when it was originally founded as a homeless shelter. In the 15th century, Aalborg was one of the richest and most prosperous cities in Europe. The richest people from ... Open »
Lubeck
Each city sight of Lübeck is a unique historical landmark. To explore the main places of interest in Lübeck the tourists are recommended to cruise the city central streets on foot. The private residence of the 18th century named Behnhaus located in the Königstrasse is a great architectural masterpiece. Simple building with Rayonnants and traditional front side is nowadays ... Open »
Hamburg
A large part of historical buildings of Hamburg was destroyed in a fire in 1842. Later historical monuments of the city were damaged during the Second World War. From the excursion point of view the Old Town is the most interesting part of the city. Without a doubt, the local Town Hall is the most striking landmark of the district. The beautiful building in the neo-Renaissance ... Open »

Culture guide to Kolding. Which fascinating sights to visit once you are in Kolding: temples, churches, museums, theaters and castles. Recommendations (with addresses, phone numbers and links) on the places 'must visit' in Kolding. Plan your own city excursion by using this page info!