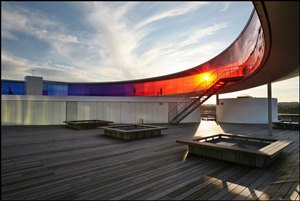 The starting point of many sightseeing tours of Aarhus is Den Gamle By - the oldest and most beautiful area of the city. It can be safely called an open-air museum, as more than 70 historic buildings of various periods have been preserved in the Old Town. Almost all the buildings are open to the public. Here you can visit a hat workshop, an antique toy store, a shoemaker's shop, as well as numerous craft shops. Some old buildings are presently occupied by bakeries and pastry shops. There are several regional restaurants in the historic district. One day is hardly enough to explore all the Old Town attractions. Many tourists come here in search of interesting souvenirs. In the pre-Christmas period, a traditional fair opens in the historic district.
Shopping in Arhus - main shopping streets, outlets and boutiques
It's hard to imagine a category of goods that could not be bought in over 800 stores operating in Aarhus. Here you can find attractively-priced clothes from popular European brands, cosmetic …

Open
An important historical symbol of the city is Marselisborg Palace. It was built in the second half of the 17th century and was originally privately owned. In 1896, due to large debts, the palace passed into state ownership and began to be used as a summer royal residence. The palace retains this high status to this day. In 1967, it underwent a major reconstruction. The palace is closed for tours, but on days when no representatives of the royal family are inside, everyone can walk around a landscaped garden surrounding the building. Its most interesting part is a chic rose garden presenting more than 350 varieties of roses. Labyrinth-shaped rose bushes look incredibly impressive during the flowering period.
The city's main religious symbol is Aarhus Cathedral, which attracts tourists with its unique architecture and a roof of rich emerald color. The construction of the very first Romanesque cathedral in its place was completed in 1300. It lasted only 30 years and was completely destroyed by large fire. It was possible to rebuild it anew only in 1449. Since then, the shrine has managed to preserve its original Gothic features. Since its construction, the 96-meter-high cathedral has been one of the largest in Denmark. The cathedral's hall is so large that it can accommodate about 1,200 people at a time. The building retains several medieval frescoes, as well as a number of valuable religious artifacts that were saved from the fire. The main decoration of its interior is a gilded altar. Copyright www.orangesmile.com
Guide to Arhus sightseeing - things to see and to visit
The city was founded by Vikings in the end of the eighth century. It is situated in a picturesque area rich in forests and lakes, and the eastern part of the city is the location of a small …

Open
Among the numerous museums of Aarhus, an outstanding one is the Moesgaard Museum acquainting visitors with the ancient history of the region. The museum's exposition features archaeological exhibits discovered during the study of East Jutland, including some unique Stone Age artifacts. In 1952, the museum was replenished with a unique exhibit, which drew the attention of scientists and tourists from around the world. It got the mummy of a man who lived in these places more than 2,300 years ago. It was found in a swampy area on the outskirts of Aarhus. Visitors to the museum are also invited to check out a collection of ancient weapons, as well as stones with runic inscriptions. 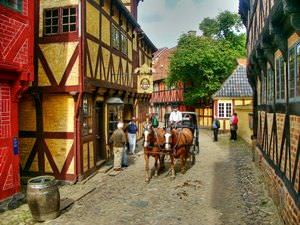 Aarhus has one of the largest art museums in Northern Europe - the ARoS Aarhus Kunstmuseum. Its official opening took place in 2004, while the museum’s collection began to be formed much earlier. The museum currently occupies a gorgeous ten-story building built in the shape of a cube and crowned with a unique rainbow-colored glass panorama. The area of the building is about 17,000 square meters, and its halls display art exhibits of various historical periods.
Family holidays with kids in Arhus. How to entertain your child, things to show to children.
Aarhus has lots of interesting entertainments for families with children. In the warmer months, Tivoli Friheden Theme Park remains their favorite leisure spot. This world-famous amusement …

Open
Here you can see the works of famous artists and sculptors of the first half of the 19th century, as well as a collection of works by famous modernists. Several halls are dedicated to the work of contemporary artists. Temporary exhibitions are often held here too. On the top floor, you will find a unique glass panorama created by the Danish artist Olafur Eliasson. It is composed of glass of all colors of the rainbow. Visitors to the gallery will have the opportunity to admire the panoramic view of Aarhus through colored glass panels. 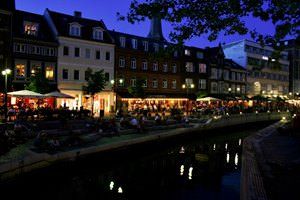 A beautiful 1857 building houses the unusual museum Kvindemuseet i Danmark whose exposition is dedicated to the culture and life of Scandinavian women. The museum building is used for lectures, seminars, and literary evenings. Their organizers and participants are exclusively women. An important component of the museum’s cultural program is children's events and activities.

This guide to cultural sights Arhus is protected by the copyright law. You can re-publish this content with mandatory attribution: direct and active hyperlink to www.orangesmile.com.
Arhus - guide chapters 1 2 3 4 5 6 7 8 9

What to visit during two-day excursion in Arhus 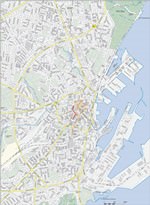 Photogallery of cultural heritage of Arhus

Excursions over cultural sights of neighbours of Arhus

Odense
Odense is a place of birth of Hans Christian Andersen. One of the museums of the city is devoted to the creative work and life of world renowned fairy tale writer. The museum is named after the author. An exposition of the Hans Christian Andersen Museum includes a collection of ancient paintings and statues of fairy tale characters created by the author. The museum regularly ... Open »
Kolding
There are also many interesting landmarks in the vicinity of Kolding. In just a few minutes drive you can reach Hindsgavl Castle dating back to the 12th century. Its first owner and founder was King Valdemar II, he was a big fan of hunting and decided to build a new residence among the game-rich forests. Over many centuries, the castle has managed to avoid serious ... Open »
Alborg
A famous local landmark is Jens Bangs Stenhus (Jens Bang's House), one of Aalborg's most recognizable and visited sites. The mansion was constructed in 1624 in the best traditions of the Dutch Renaissance. It was built by one of the wealthy local merchants for his family. For almost 400 years, it has amazed people with its facade's original design. There is an interesting ... Open »
Copenhagen
Copenhagen offers widest choice of interesting places for visiting to its guests. Travellers are welcome to attend excursions to the historical monuments of the city. The building of the City hall deserves particular attention. It was built in the beginning of the 20th century. This beautiful building made of red brick keeps amazing visitors by its grandeur and austerity. ... Open »
Malmo
The magnificent Malmöhus Slott palace houses several significant museums at once. The walls of the palace host the Municipal Museum, the Natural History Museum and the Museum of Arts. A part of the palace halls are occupied with Maritime Museum and the Museum of Science and Technology. The most visited cultural establishment of the city is the Malmö Konsthall art gallery. ... Open »
Kiel
Today the large-scale architectural complex is surrounded by an extensive parkland. Not far from the University the Botanical Garden is located; it was opened in 1688. University staff was directly involved in setting out the garden. Today it assembles one of the richest collections of exotic flowers and plants in the country. Guests will enjoy a huge number of museums and ... Open »

Culture guide to Arhus. Which fascinating sights to visit once you are in Arhus: temples, churches, museums, theaters and castles. Recommendations (with addresses, phone numbers and links) on the places 'must visit' in Arhus. Plan your own city excursion by using this page info!