Sightseeing in Alborg - what to see. Complete travel guide

Aalborg is the fourth-largest Danish city, which is rich in tourist attractions and cultural centers that attract tourists. In this city you will find many old buildings that stand here from the 16th century. These houses create a special unique atmosphere and national color that is not comparable with the situation in contemporary European resorts.
Your active city break in Alborg. Attractions, recreation and entertainment - best places to spend your day and night here
Aalborg's most popular entertainment center is Aalborg Zoo, which is visited by hundreds of tourists and locals every day. Since its opening in 1935, this zoo has been the largest in …

Open
St. Budolfi Church is one of the main religious sights of Aalborg. It was founded in honor of the patron saint of seafarers. The first building was created in the beginning of the 10th century, and it was a small Romanesque church. In the 14th century the shrine was totally destroyed, and later a new church was founded on the same site. Inside the church is decorated with old portraits and murals, which are stored in a special gallery. Outside the church you can also see beautiful murals on the walls. These murals were printed in the 16th century. An interesting fact - all valuable items and jewelry that decorate the halls of the church have been presented to the monks from noble city merchants.
Alborghus Slot remains the most magnificent architectural place of interest in Aalborg. The castle was built in 1539 and for a long time this was the residence of one of the king’s viceroys. After visiting medieval halls you can take a walk through the castle’s gardens and admire the beautifully decorated inner yard. Copyright www.orangesmile.com
Advices to travellers: what you should know while being in Alborg
1. Aalborg is a northern city, so there is never hot here even in the height of summer. July is considered the warmest month of the year when air temperature rises to 16 °C. 2. Despite …

Open
Besides visiting historical monuments and sacred places, this city is famous for one of the largest zoos in Denmark. Visitors can attend it all year round. In this zoo you can see 1,200 breeds of animals. A complex, in which live polar bears, is considered among the most progressive ones as its conditions are close to the real environment. The zoo will be definitely loved by children, but shopping fans will also find here lots of amusement - there are several amazing souvenir shops on the territory of the zoo. 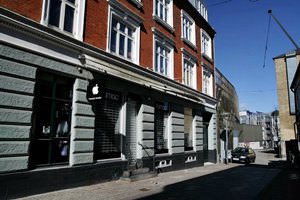 In Aalborg, you'll find an interesting Museum of Modern Art opened in 1972. A building housing the museum was designed and constructed specifically for it. Rare marble has served as a finishing material. The museum's interior is equally interesting: its halls can be easily converted to the needs of a particular exhibition. Visitors to this museum will have the opportunity to admire works by contemporary artists, there is a special room for holding chamber music concerts, as well as a library and a small cafe. The museum building is surrounded by a picturesque park where you can see beautiful sculptures in addition to ornamental plants.
Extraordinary weekend in Alborg - unusual places, services and attractions for travel gourmet
…

Open
One of the city's most beautiful architectural monuments is Jens Bang's House built in 1624. The house belonged to a wealthy local merchant, whose name it still bears. The majestic building is a vivid example of the Dutch Renaissance, its facade has managed to preserve many unique original elements of decoration. Currently, the historic building is a venue for various official and solemn events; on its ground floor is the city's oldest pharmacy that was opened more than 300 years ago. 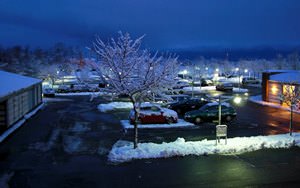 The Church of our Lady is among the city's prominent religious attractions. In the 12th century, it was part of a large Benedictine monastery that hasn't survived to our days. One of the main symbols of the church is its gold-decorated organ installed inside in 1961. Also, visitors to the church will be able to admire an antique wooden chair, which has been standing here since 1581.
Shopping in Alborg - main shopping streets, outlets and boutiques
Aalborg will delight shopping enthusiasts with a variety of interesting stores. The city's most popular shopping arteries are Bispensgade and Algade streets. Here you can find shops of …

Open
Walking through the Gammeltorv (Old Market), you can see another important architectural monument of Aalborg - the olf Town Hall building. The magnificent Baroque building that we can see today was built in 1762. In recent years, the purpose of the building has significantly expanded. Today, besides hosting receptions of official delegations, it is also a venue for holding various public cultural events. 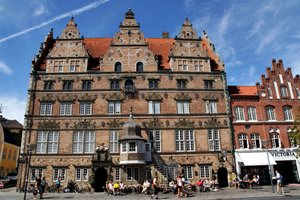 Also, Aalborg has the wonderful Historical Museum founded in 1863. It presents a rich collection of historical artifacts dedicated to the most important events in the history of the city.

This guide to iconic landmarks and sights of Alborg is protected by the copyright law. You can re-publish this content with mandatory attribution: direct and active hyperlink to www.orangesmile.com.
Alborg - guide chapters 1 2 3 4 5 6 7 8 9

Survived castles around Alborg
♥   Castle 'Aalborghus Castle' , 0.5 km from the center. On the map

National and city parks around Alborg
♥   National Park 'Nationalpark Mols' , 98.1 km from the center. On the map

Sights around Alborg from our guide 'Extreme places on Earth' 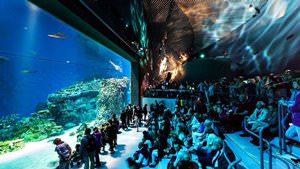 Distance from Alborg center - 59.7 km.
In addition to the huge aquarium, there is a large outdoor pool that is home to seals. Travellers with children will be interested to visit the aquarium in a warm season, when Krabbekysten interactive zone is open for youngest visitors. It is a large playground with a pond, petting swimming pool, and a pier, where you can catch crabs. In summer, an excellent area for a picnic, cafes with outdoor terraces, and souvenir shops are available to visitors. … Read further 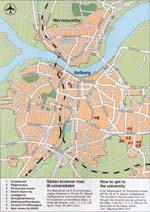 Search touristic sites on the map of Alborg

Sightseeing in regions nearby Alborg

Silkeborg
In the center of the largest lake region of Denmark is located a small town named Silkeborg. On one side the town is adjacent to Gudenaa - the longest river in the country. The other side of the town borders with several large lakes and a forest. Tourists, who come to the city, are offered to try a large choice of activities including water sports, golf, riding rented ... Open »
Arhus
The city was founded by Vikings in the end of the eighth century. It is situated in a picturesque area rich in forests and lakes, and the eastern part of the city is the location of a small cove. Today it is a major business and cultural center, the second largest city in Denmark. Aarhus has quickly become popular among European youth, because there are so many entertainments ... Open »
Goteborg
Gothenburg is located on the west coast of Sweden which is washed by the North Sea. The city was founded by order of Gustav II Adolf in 1621. Initially this was a large industrial port in the mouth of the Gota River. Currently the population of the city reaches 500 thousand of people, and over 700 thousand together with neighbor suburbs. This makes Gothenburg the second largest ... Open »
Kolding
Kolding is a small provincial town that is located not far away from the border with Germany. Start your observation of this place from its central street. Here you will find several large museums, exhibition galleries and even an Art Museum. The Museum of History of Kolding is a wonderful place to learn more about the history of this place. The museum is opened in an ancient ... Open »
Halmstad
A major seaport and a famous industrial center, this place has been one of the biggest defensive spots of Sweden. The city was founded in the 11th century and until the 16th century it was used as a military base. The coat of arms of the city depicts three hearts, which symbolize courage and heroism of the local people. Halmstad is situated on the bank of the Nissan River. ... Open »
Odense
Odense is one of the largest cities in Denmark and the birthplace of the famous storyteller Hans Christian Andersen. The streets of this place keep the memory of the world-famous writer, so here you can see many sculptures, which demonstrate the characters of his tales. The city is rich in historical monuments and places of interest as well. The Tower of Odin is one of them. ... Open »

All about Alborg, Denmark - sightseeings, attractions, touristic spots, architecture, history, culture and cuisine. Prepare your trip together with OrangeSmile.com - find out the 'must see' things in Alborg, which places to visit, which excursions to take, where the breathtaking views are waiting for you. Planning your trip with this travel guide will help your to get the most out of Alborg in few days.