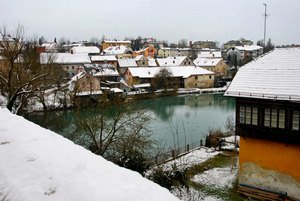 Novo Mesto will please tour-goers with a variety of historical monuments and museums. Most of the preserved city attractions can be found in the historic district of Stari Grad that lies on the banks of the Krka River. Besides beautiful old architecture, the Old Town offers several picturesque parks and squares. It is best to explore them on foot, as interesting architectural monuments can be seen at every step here.
Advices to travellers: what you should know while being in Novo Mesto
1. The main part of historical attractions is concentrated in the Old Town. If you don't want to miss anything interesting, it's best to explore the area on foot. 2. For fans of event …

Open
The city's main religious monument located in the historic district is Novo Mesto Cathedral. The shrine built in the early Middle Ages looks more like an old castle. Since its foundation, its appearance has remained virtually unchanged. The main building material was light stone. Among its special architectural elements, it is worth highlighting tall narrow windows and a still-standing high tower visible from many streets of the historical district. Now a picturesque landscape park is formed around the cathedral. It is always a great place to go for a walk, the more so as its design changes from year to year.
In the vicinity of Novo Mesto, several interesting archaeological areas have been studying for dozens of years. Researchers managed to establish that the very first settlements were founded in these places more than 2,000 years ago. During excavations they found many prehistoric artifacts. All of them are put on display in the Museum of Dolenjska, one of the most visited cultural centers in the city. Here one can see collections of antique dishes and ceramics, household items, and jewelry. In recent years, the museum’s collection has been significantly replenished with archaeological and historical exhibits from other regions of Slovenia. Copyright www.orangesmile.com
Shopping in Novo Mesto - main shopping streets, outlets and boutiques
Novo Mesto is famous for large shopping centers located both within the city and in its immediate environs. Here you can find clothes, shoes, and accessories of popular European brands, as …

Open
One of the most picturesque places in the Old Town is the Breg embankment. It is remarkable for the fact that an incredibly beautiful 17th-18th centuries architecture has been preserved near the riverbank. From the embankment, you can see the cathedral's spire and admire miniature houses with tiled roofs of rich burgundy color. Some historic buildings are now occupied by restaurants and shops, which makes a walk along the promenade even more interesting. 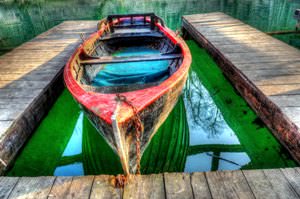 Just a short walk away is the central city square, the main decoration of which is the old Town Hall building. The square is also surround by spectacular historic buildings, some of which are over 300 years old. Once the mansions belonged to wealthy local merchants, but now most of them are converted into hotels and restaurants. The main city square is a permanent venue for major local holidays and festivals. Large fairs are organized here several times a year.
Guide to Novo Mesto sightseeing - things to see and to visit
The famous historical and cultural center, Novo Mesto is an important industrial and economic area of the country. The city is very picturesque, so it has quickly gained popularity and …

Open
Not far from the embankment is the Kandija Bridge, another spectacular architectural monument. This pedestrian bridge is laid across the river and leads to a beautiful forest park zone. For tourists, the bridge is also an attractive viewpoint, from which they can take amazing pictures of the river and the historic embankment. 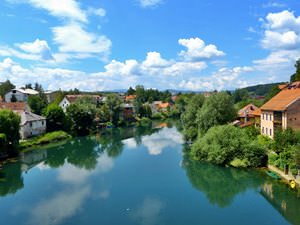 Some historical sights of a later period have been preserved in Novo Mesto. In one of the remote areas of the city, you'll find a surviving WWII bunker. The bunker is located in a large historic park and is open to the public. Several wartime artillery guns are installed here. These places are regularly visited not only by curious tourists but also by local residents.
Family holidays with kids in Novo Mesto. How to entertain your child, things to show to children.
The city on the Krka River is a great place to visit as a family. The picturesque views of the city are fascinating from the first moment, there is some romance inherent in it. Probably …

Open
One of the city's most spectacular architectural structures is the ancient church Frančiškanska Cerkev. It features exquisite Byzantine elements, the facade of the church is decorated with carved rosette windows and bas-reliefs, and the main feature of the church is an old clock tower. The church is located on one of the Old Town streets. Fairs and outdoor entertainment programs are often held on the square nearby. 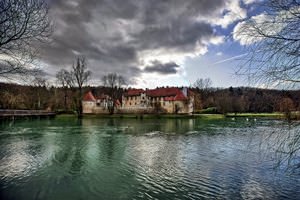 On the outskirts of the city, there are several castles to be visited by all fans of historical places. The first official mention of Otocec Castle dates back to 1252, but researchers believe that it could have been built much earlier. For hundreds of years, it belonged to noble families and served as an important defensive point. One of the main features of the old castle is its location on a small island in the middle of the Krka River.

In the section below, you can get one of our excursion, activities or city discovery tours over Novo Mesto and surroundings. Our website offers 10-30% lower ticket prices, when compared to the offline purchase on the spot.

City tours, excursions and tickets in Novo Mesto and surroundings

This guide to cultural sights Novo Mesto is protected by the copyright law. You can re-publish this content with mandatory attribution: direct and active hyperlink to www.orangesmile.com.
Novo Mesto - guide chapters 1 2 3 4 5 6 7 8
Reference information
Map of all churches

Cathedrals and basilicas near Novo Mesto
♥   Nacionalno sv. svetog Josipa, Karlovac, 43.6 km from the center. On the map

Excursions over cultural sights of neighbours of Novo Mesto

Ljubljana
Budnar house has turned to an established place of holding of different ethnic crafts presentations. The city and its nearest suburbs have preserved several ancient castles and fortresses. The most attracting for tourists is considered to be the Bogensperk castle. The castle was built in the 14th century and survived through the course of the history till nowadays almost ... Open »
Zagreb
Guests of the city will be also interested in visiting Archaeological Museum, which includes a rich collection of about 40,000 priceless artifacts. The collection of the museum contains items found by scientists in different parts of the country. Many artifacts were found directly in Zagreb. Visitors of the museum will have an opportunity to see interesting numismatic ... Open »
Velika Gorica
Not only Velika Gorica but also the county is rich in historical landmarks. Excursions to wooden churches built in the 17th century are always very popular. These elegant constructions have survived till our days in almost a pristine condition. Inside, visitors will find ancient frescos and icons, as well as other important religious artifacts. The Turopolje Fortress is one ... Open »
Opatija
The city of Opatija offers several exhibition centers and galleries to visit. The Juraj Matija Sporer center holds interesting cultural events on regular basis. Several times per month the center presents exhibitions of contemporary painters and sculptors. The Juraj Matija Sporer has turned to an established place of holding of global events. Opatija is a perfect destination ... Open »
Maribor
One of the oldest but equally attractive constructions of Maribor is the Water Tower. It was built on a bank of the Drava river in the 16th century. The tower had protected local residents from Turkish invaders for many years. When the dam was being built, there was a threat of flooding of the unique historical monument but it was saved due to the locals’ efforts. The ... Open »
Krk
Fans of excursions should definitely look in the picturesque town of Punat, which continues to be a major industrial center. It produces excellent olive oil; the town has an old mill and several very attractive shops. The islet of Kosljun, which is in close proximity to the Krk, there is the Franciscan monastery and a very interesting museum that introduces the rich and ... Open »

Culture guide to Novo Mesto. Which fascinating sights to visit once you are in Novo Mesto: temples, churches, museums, theaters and castles. Recommendations (with addresses, phone numbers and links) on the places 'must visit' in Novo Mesto. Plan your own city excursion by using this page info!