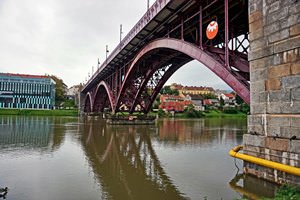 Maribor has preserved a huge number of historical constructions built in different epochs, so it is really hard to allocate one from such variety of attractions. One of the major historical symbols is the Maribor Castle

that is located in the city center and surrounded by picturesque squares. The castle built in the second half of the 15th century is a unique architectural monument with decorative elements in different styles. The castle is distinguished by a beautiful interior design. The city guests have an opportunity to visit the most marvelous halls of the castle and admire painted ceilings and decorative pieces of art.
Your active city break in Maribor. Attractions, recreation and entertainment - best places to spend your day and night here
In Maribor, there are not so many noise entertainment venues. The city will impress those travelers who like hiking tours and cannot imagine their vacation without visiting interesting …

Open
Among multiple cultural centers of the city, the Regional Museum of Maribor that occupies some rooms of the Maribor Castle deserves a special attention. Incredibly beautiful halls present rich collections of archaeological, historical and ethnographic exhibits. It also should be noted that a lot of interesting themed events dedicated to national culture and art are regularly held in the museum.
In the city, there are many gorgeous religious monuments including Franciscan Church. The first religious construction appeared in this place at the end of the 18th century. The beautiful basilica with high towers the guests of Maribor can admire has been decorating the city since the beginning of the 20th century. This fascinating building of a red brick resembles a classic Roman basilica. The main decorative element of the church’s interior is sophisticated stained glass. Copyright www.orangesmile.com
Top hotels in Maribor for business trip or short vacation
The most upscale and most prestigious hotel in Maribor is Habakuk-Wellness. It is located in the picturesque submontane district of Pohorje and has a fascinating territory. The hotel is …

Open
One of the oldest but equally attractive constructions of Maribor is the Water tower. It was built on a bank of the Drava river

in the 16th century. The tower had protected local residents from Turkish invaders for many years. When the dam was being built, there was a threat of flooding of the unique historical monument but it was saved due to the locals’ efforts. The pedestal of 142 m in height on which the tower is installed now was built exactly for protective purposes. 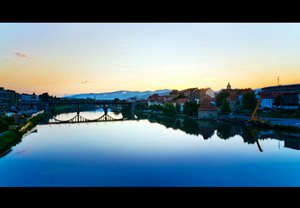 Old Defence Towers deserve a special attention of fans of sightseeing tours too. There are three towers in the city and each of them is unique in its own way. The Jewish Tower built in the 15th century is located on the territory of the historical district of Lent. It is a location of a small historical museum that stores an interesting collection of old documents and pictures. The Judgment Tower has been protecting the city since the 14th century. In the middle of the 16th, century it was reconstructed into a small fortress. The tower's name recalls that once trial hearings were held and in the Middle Ages witches were executed here. The Black Tower was built in the middle of the 15th century and is one of a few strengthening constructions that have managed to survive in its pristine form to this day.
Guide to Maribor sightseeing - things to see and to visit
Maribor is one of the biggest cities in Slovenia and the most important cultural center of the country that has long attracted tourists’ attention. The castle called Marchburg was …

Open
In Maribor, there are also quite unusual attractions including the Old Vine. The age of this fabulous plant is more than 400 years. It is remarkable that the vine flourishes every year. Maribor is well known to connoisseurs of exquisite wine, as there are a lot of old wineries in the city. That is why the Old Wine is one of the major symbols of the city. Moreover, it has recently become a record-breaker of the Guinness World Records. A rare kind of wine is cooked of grapes picked from the vine. Such wines are stored in the famous cellar Maribor’s Underworld.

In the section below, you can get one of our excursion, activities or city discovery tours over Maribor and surroundings. Our website offers 10-30% lower ticket prices, when compared to the offline purchase on the spot.

City tours, excursions and tickets in Maribor and surroundings

This guide to cultural sights Maribor is protected by the copyright law. You can re-publish this content with mandatory attribution: direct and active hyperlink to www.orangesmile.com.
Maribor - guide chapters 1 2 3 4

What to visit during two-day excursion in Maribor

Cathedrals and basilicas near Maribor
♥   Stolna cerkev sv. Jurija, Ptúj, 22.8 km from the center. On the map

Unique spots in Maribor and near 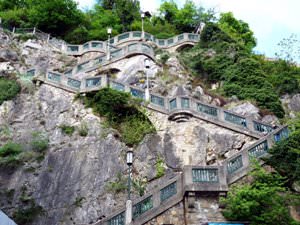 Distance from Maribor center - 60.1 km.
You can climb to the height of about 70 meters. In addition to the preserved tower on top of the hill you can see the surviving fragments of the old castle and many other ancient buildings that are sure to interest those who like excursions. Initially, the Schlossberg staircase was built for strategic purposes in order to provide an optimal path to the fortifications at the top of the mountain. Today, it provides guests with a shortcut to the most important city attractions. … Read further

Distance from Maribor center - 61.5 km.
A few years before the museum's opening, the author said that he wants to assemble a collection of things associated with the actor. A few years later, Urdlen confessed that they were necessary for him to be exhibited in the unique museum. Today, the collection presented in the old house of Schwarzenegger is truly unique. You can see a lot of amazing things, which include old posters of the actor, sculptures, and personal sports equipment of the famous bodybuilder. A rich collection of old photographs and a figure of Terminator recreated as accurately as possible are just a part of the exhibits that guests can explore in the museum. … Read further

Photogallery of cultural heritage of Maribor

Excursions over cultural sights of neighbours of Maribor

Graz
The eastern part of the square is the location of a beautiful memorial that was erected in the memory of World War II victims. Without a doubt, Mausoleum of the Emperor Ferdinand II is one of the most beautiful architectural monuments of the city. This is a beautiful Baroque building that is used as a tomb of the royal family. The mausoleum can safely be called a beautiful ... Open »
Zagreb
Upper Town (Gornji Grad) will be a great place to start your excursion program. This district is considered the oldest one in the city, so here visitors will find a lot of beautiful historic buildings and numerous museums. While walking along winding medieval streets, tourists will surely see a lot of unique architectural sites and will be able to visit a variety of cultural ... Open »
Novo Mesto
The city's main religious monument located in the historic district is Novo Mesto Cathedral. The shrine built in the early Middle Ages looks more like an old castle. Since its foundation, its appearance has remained virtually unchanged. The main building material was light stone. Among its special architectural elements, it is worth highlighting tall narrow windows and a ... Open »
Velika Gorica
There is a beautiful monument not far away from the museum. It is dedicated to people who died fighting for the independence of Croatia. Open University, which was founded in 1960, is also an interesting place to explore. Nowadays, the university building is the location of several exhibition halls and galleries. It often hosts various cultural events and classical music ... Open »
Ljubljana
Budnar house has turned to an established place of holding of different ethnic crafts presentations. The city and its nearest suburbs have preserved several ancient castles and fortresses. The most attracting for tourists is considered to be the Bogensperk castle. The castle was built in the 14th century and survived through the course of the history till nowadays almost ... Open »
Carinthia
Each city of Carinthia has its own unique historical monuments giving travelers a lot of impressions. Klagenfurt is the capital of the region; it has lots of historical objects, as well as popular tourist cities of the country do. The picturesque Neuer Platz is considered the center of the city; there are several important city symbols next to it. These include unusual Lindwurm ... Open »

Culture guide to Maribor. Which fascinating sights to visit once you are in Maribor: temples, churches, museums, theaters and castles. Recommendations (with addresses, phone numbers and links) on the places 'must visit' in Maribor. Plan your own city excursion by using this page info!