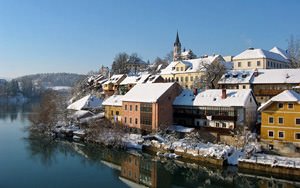 The townspeople are characterized by a special culture, which finds manifestation in every aspect of life. They are very proud of their historical heritage, historic buildings and monuments erected hundreds of years ago can be seen on all city streets. An important component of the local culture is beautiful holidays, some of which were first held back in pagan times. Among the oldest and most interesting traditions, it is worth mentioning the New Year's Carnival. The holiday program starts in the city a few weeks before the New Year. Fairs and performances are held on the main city streets and squares, and a few days before the New Year, it is customary to hold the carnival. Everyone is invited to participate - you just need to put on a colorful suit and a mask.
Guide to Novo Mesto sightseeing - things to see and to visit
The famous historical and cultural center, Novo Mesto is an important industrial and economic area of the country. The city is very picturesque, so it has quickly gained popularity and …

Open
Similar festivities are held on the occasion of the Butter Week. Among the main symbols of this holiday are frightening masks. Hundreds of years ago, with their help, local people tried to scare winter away so that it would soon give way to spring and rise to a new fertile year. A mandatory component of all the local holidays and festivals is folklore performances. National music is especially popular among tourists - traditional Slovenian music is very energetic and slightly reminiscent of Austrian. The fact that musicians are dressed in beautiful traditional costumes makes dance and music performances even more spectacular.
An essential component of local culture is gastronomic traditions, which have remained unchanged for centuries. Many travelers call the local cuisine “peasant”, as much of the dishes are very easy to prepare and serve. Local restaurants mainly use regional products, therefore, they offer pretty affordable prices. Its guests are invited to try hearty meat and potato dishes, as well as dozens of soups - a distinguishing feature of the regional menu. A kind of "attraction" of traditional cuisine is mushroom dishes, which can be tasted at every step here. Copyright www.orangesmile.com
Family holidays with kids in Novo Mesto. How to entertain your child, things to show to children.
The city on the Krka River is a great place to visit as a family. The picturesque views of the city are fascinating from the first moment, there is some romance inherent in it. Probably …

Open
Of great importance to local residents are winemaking traditions, which gave rise to many symbolic holidays. One of the locals' favorites is St. Martin's Day that falls on November 11th. Locals consider St. Martin to be the patron saint of winemaking and a holiday dedicated to him is annually celebrated in many cities of Slovenia. On the day of the holiday, it is customary to hold wine and gastronomic festivals. The bulk of the entertainment programs take place in the open air. 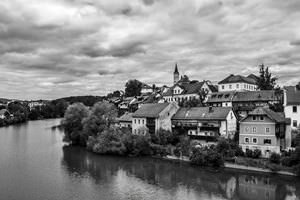 At fairs organized on the squares, you can try and buy the best local wines and regional delicacies. During the holiday, they also organize special thematic tours, during which you can visit historic wineries and cellars. In recent years, St. Martin's Day has become a large-scale gastronomic holiday whose participants can get acquainted with the peculiarities of the production of the best regional products.
Cuisine of Novo Mesto for gourmet with top restaurants and cafe
A large part of the restaurants presented in the city specializes in Slovenian cuisine. Such restaurants are considered the most popular among tourists because they serve dishes most …

Open
Apart from the beautiful age-old traditions, the inhabitants of Novo Mesto are known for a modest and friendly character typical of Slovenes. They are very responsible people characterized by a hardworking and serious nature. One of the main values for local residents is the family and traditions related to it. It is not customary to put family life on public display - family affairs can only be discussed in a narrow family circle. 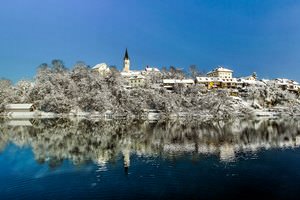 Local people are big patriots, not only of their country but also of their hometown. It is not for nothing that ordinary citizens take part in many holidays and festivals - each of them wants to make their contribution to the preservation of native culture. Here, people behave reserved without raising voices and showing off emotions in public places. Also, visitors to the city should take into account that it is customary to start a working day here quite early - some state institutions may open at 7:00 am. The working day also ends quite early, no later than 3:00-4:00 pm. Residents of the city can hardly be called big fans of nightlife entertainment. Many of them prefer to spend evenings at home. The streets are almost empty after 10:00 pm so Novo Mesto doesn't offer a wide choice of nightclubs.

This guide to traditions and festivals in Novo Mesto is protected by the copyright law. You can re-publish this content with mandatory attribution: direct and active hyperlink to www.orangesmile.com.
Novo Mesto - guide chapters 1 2 3 4 5 6 7 8

City tours, excursions and tickets in Novo Mesto and surroundings

Cathedrals and basilicas near Novo Mesto
♥   Stolna cerkev sv. Nikolaja, Novo Mesto (Rudolfswerth), 1.2 km from the center. On the map

Survived castles around Novo Mesto
♥   Castle 'Otocec Castle' , 7.4 km from the center. On the map

Colors of Novo Mesto in photos

Traditions and festivals in cities around Novo Mesto

Ljubljana
The main personality traits of local people are considered to be modesty, earnest, independence and diligence. At the first sight the local people may appear to city visitors avoidant and unsociable. But in fact they are eager companions having fine sense of humor. Tourists should definitely take into account the peculiarities of the personality and psychology of local people ... Open »
Zagreb
Fans of theater will be more impressed by Evrokaz festival, which is a true event of international significance. Summer Festival is one of the most prominent and well-known events not only in the country, but also beyond its borders. The event is accompanied by a number of interesting entertainment activities, concerts and theater performances, exhibitions and competitions. ... Open »
Velika Gorica
Despite its relatively small size and population, Velika Gorica is the largest city in the Zagreb County. The name of the city consists of two words where Velika means big and Gorica means hill. There is another opinion on the name of the city. In one of the local dialects Gorica means vineyard, so Velika Gorica can be translated as “big vineyard”. Indeed, mild climate of ... Open »
Opatija
Hospitality and good nature of local people are that traits which make this tourist destination popular among foreign travelers as they feel in Opatija as comfortable as at home. A major part of local folks has a good command of English language that is why foreign guests will not face a sufficient language barrier. However local people are very passionate about their ethnic ... Open »
Krk
For a few days the city is immersed in a unique medieval atmosphere and you can see the most unusual characters in beautiful vintage costumes in the streets. Knights and priests, royal court and jesters entertain guests every day of the festival; one of the most exciting events is jousting. It is held a couple of times a day; after exciting events holidaymakers are invited to ... Open »
Cres
Some of the contradictions are connected with tourists who come to the island. European hospitality and global service standards reached Cres. Locals are friendly because tourists bring enough money to the local population. However, it is obvious for everybody that affability is just a formality for locals. Despite the fact that local inhabitants are not always polite with ... Open »

Cityguide on traditions, mentality and lifestyle of people in Novo Mesto. Learn the best periods to visit Novo Mesto to discover its soul - authentic festivals, events and celebrations. We will also reveal the interesting habits, attitude towards the world and to tourists in Novo Mesto.