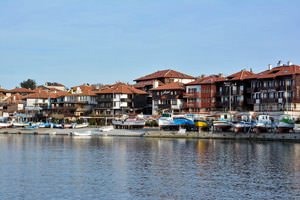 Nesebar is a city of unique architecture and of multitude of historical landmarks and sights. The historical center of the city or the old town will be of great interest to foreign tourists. The old town is a scenic peninsula which entire territory is a historical object considered to be one of the most important sights of the world. This is exactly the place to witness the buildings of different epochs, religious monuments and original museums.
Authentic traditions, festivals and lifestyle of Nessebar inhabitants
Local culture, traditions and customs of local folks will seem original and unique to people strange to Bulgarian culture. Nesebar is a unique destination in every aspect: its national …

Open
One of the oldest buildings on the territory of the peninsula is considered to be the Church of St Stephen or the New Bishopric. The church was established in the 11th century and presents an architectural landmark of ultimate beauty. Built of stone church survived in its initial look through many centuries. Its walls keep a priceless collection of religious artifacts. The church of St Aliturgetos is considered to be a religious landmark of a later period.
This church was established by Greeks in the period of the early Middle Ages. In the early 20th century the building of the church was massively destroyed with an earthquake and was partially ruined. However the survived parts of the religious building give a chance to fully embrace the foregone might and beauty of the church. The Church of St Sophia is a must visit landmark for Nesebar guests. This historical landmark was also severely destroyed with an earthquake and only several walls survived resemble of today a scale church. Copyright www.orangesmile.com
Your active city break in Nessebar. Attractions, recreation and entertainment - best places to spend your day and night here
Scenic beaches are still the main places of recreation among tourists. The largest beach on the territory of the city is considered to be the South Beach. The coastal area there features …

Open
Among important architectural sights and landmarks one should necessarily visit the Church of St Spas. The church was erected in the period of early Middle Ages and is a typical building of the architecture of those times. An important symbol of the city is a complex of the Byzantine Baths which was established as far back as in the 6th century. Health giving fonts were the popular place to visit among local aristocracy. The fonts were as well visited by the Byzantine emperor Constantine IV. 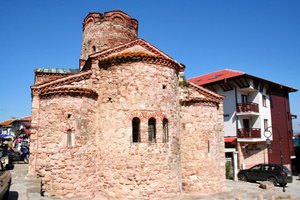 The most visited cultural destination of Nesebar is the Archeological Museum. Its opening was held in 1994. Its scale exposition is placed in four halls. Apart from the archeological artifacts the museum exposition presents a unique collection of icons. Guests of the city will like the Ethnographical museum as it offers a unique collection of various artifacts. The collection of the museum offers folk costumes, adornments, musical instruments and the household items of different epochs. This is the smallest part of those important tourist sights which will be of great interest to curious travelers.
Advices to travellers: what you should know while being in Nessebar
1. National currency is the only means to pay for purchases and services in the city. Tourists can exchange currency in one of the local banks or private exchange offices. Large …

Open
The main attraction of the old Bulgarian city is narrow stone streets, winding as if showing the way to important places in Nessebar. The streets are framed by beautiful 18th-19th century houses standing close to each other. Each of them can be considered a work of architectural art. The resort town has many small parks where it is very nice to sit in the shade and walk through the picturesque landscapes getting into the spirit of the old city. 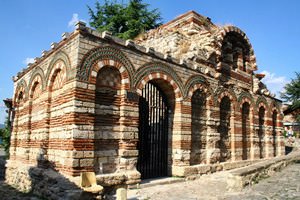 It's recommended to walk along Nessebar streets in the evening, leaving the daytime for exploring museum exhibits, attractions, and active entertainment. That's because the city is beautifully illuminated, which gives it some romantic mood. In the evening, musicians play in the historic streets and at iconic places. In the resort town, you can find several interesting sculptures (for example, the Monument to Bulgarian Pilots, St. Nicholas Statue), as well as two windmills. The first is located near the Old Town (and has long become a symbol of the city) and the second is on the northern coast of the peninsula, next to the Church of Our Lady of Eleus.
Extraordinary weekend in Nessebar - unusual places, services and attractions for travel gourmet
…

Open
The ancient Mesembria Fortress that was once located in Nessebar was destroyed by the Turks in 1452. The Western Fortress Wall with the Old Town Gate is all that remains of its former greatness. Its length barely reaches 100 meters, the height is 8 meters. The rest of the fortification lies under the Black Sea waters. The same 1452 marked the beginning of the Turkish period in the history of Nessebar, which ended in 1878. Only Turkish baths and a fountain remind us of this period - all other buildings and structures belong to other eras. 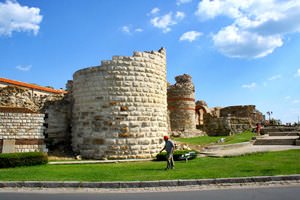 One should never pass by the Ancient Theater, commonly known as the Amphitheater, where a lot of interesting (and mostly free) concerts with the participation of local and foreign performers take place in summer. Apart from that, standing on a small hill, it offers magnificent views of Nessebar's Old Town. The city has several art galleries, which are certainly worth a visit if you are interested in local art. These are the Animals and Gallery-TA, as well as the Art Shop Orange.

In the section below, you can get one of our excursion, activities or city discovery tours over Nessebar and surroundings. Our website offers 10-30% lower ticket prices, when compared to the offline purchase on the spot.

This guide to cultural sights Nessebar is protected by the copyright law. You can re-publish this content with mandatory attribution: direct and active hyperlink to www.orangesmile.com.
Nessebar - guide chapters 1 2 3 4 5 6 7 8 9
Reference information
Map of all palaces

Photogallery of cultural heritage of Nessebar

Excursions over cultural sights of neighbours of Nessebar

Burgas
The ruins of Phoros Fortress are a no less interesting historic landmark of the region. According to a theory, the fortress was built in the early medieval period. The protective facility was almost completely destroyed by Turkish invaders, so nowadays visitors can see only a small part of the surviving constructions. The history of Phoros Fortress is full of secrets and ... Open »
Varna
Varna Archaeological Museum is definitely among cultural institutions of the city which are worth visiting. The exhibition of the museum occupies 32 halls. Here you will be able to see priceless artifacts of ancient times, as well as findings from the Middle Ages and Renaissance period. A collection of ancient jewelry is considered the most valuable artifact of the museum. The ... Open »
Golden Sands
A visit to this museum is nothing similar to excursions offered in numerous cultural institutions. Once tourists have finished observing the exhibition, they will be invited to taste popular dishes of Bulgarian cuisine, and will be treated with excellent home-made wine. All visitors are also welcome to participate in national entertainment and learn about local traditions. In ... Open »
Balchik
While in Balchik, fans of unusual tours must head to the ancient Silver Well. It was built in the 19th century and has never stopped functioning. Even though the townspeople no longer need to collect freshwater, the well was not destroyed. Now it is located in a picturesque garden, where, in addition to beautiful plants, you can see fragments of old stone buildings. ... Open »
Constanta
During a walk through the city travelers can meet several archaeological sites, which have been excavated until recently. Ruins dating to the Roman Empire are also among the city's most important sights. A particular attraction is also local casino that was opened in the early 20th century. Despite the status of the institution, it belongs to cultural legacy of the city. The ... Open »
Istanbul
Topkapi Palace is a no less interesting architectural monument, which construction started by the order of Mehmed II and took place more than four centuries ago. Inside the beautiful palace is stored a priceless artifact - a mummified hand in a silver frame. According to an ancient legend, the hand belonged to Prophet Muhammad. Many interesting stories and legends are ... Open »

Culture guide to Nessebar. Which fascinating sights to visit once you are in Nessebar: temples, churches, museums, theaters and castles. Recommendations (with addresses, phone numbers and links) on the places 'must visit' in Nessebar. Plan your own city excursion by using this page info!