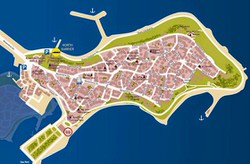 Interactive maps of hiking and biking routes around Nessebar

1. You can zoom in/out using your mouse wheel, as well as move the map of Nessebar with your mouse.
2. This interactive map presents two modes: 'Biking Routes' and 'Hiking Routes'. Use the '+' button on the map to switch between them.

This Nessebar map has two modes: 'Railway Network' and 'Landscape & Rural Map'. Use the '+' button on the map to navigate.

Bulgaria - moving around the country

The country has a large number of airports. However, only three among them accept international flights. The largest, traditionally, is located in the capital of Bulgaria and is called Vrazhdebna. There are shuttle buses which run constantly to the airport, and travel time will take no more than 30 minutes. The fare is about 1 euro. Also situated near the airport, is a large parking space where there are taxis and transfers. It is possible to rent a car or other vehicles at the relevant points. The airport infrastructure is quite developed and modern. Here, every traveler will find all the essentials for recreation and entertainment. On the territory there are eateries, cafes, restaurants, and bars. There are also various shops, including Duty Free ones. Within the territory, there are several lounges, facilities for people with disabilities, as well as nurseries. You can also change money or contact the branch office of some international banks at the airport. … Open

Overview of festivals and celebrations in Bulgaria

The Day of the National awakening is celebrated on November 1 in honor of those who were able to revive the people's spirit during the hard times of the Ottoman rule. The national awakeners fought for their traditions and cultural values, and did not allow violation of the sovereignty of the country. They were simple teachers and confessors, thanks to whom the country began to develop in science and modern literature. Church activists in 1860 achieved recognition of the Bulgarian Hexarchy. The holiday unites the spirit of all the inhabitants of Bulgaria and is recognized as a national day off in schools and universities. Bulgarians lay flowers on the monuments of the national leaders, and in their organized reading rooms are amateur collectives. … Open

Our guide to Nessebar

Today, many of Nessebar's old churches are listed as UNESCO World Heritage sites. Particular attention should be paid to the 12th-century Church of St Paraskeva, which has preserved unique elements of antique decoration in its walls. Another unique architectural monument is the Church of St. Stephen built in the 11th century, while the Church of Christ Pantocrator is a striking example of medieval architecture. … Open

Nessebar for children - what to visit

Be sure to explore Koloezdachen Klub Nesebar, an equestrian center where kids can ride a pony. Every child would be happy to experience something like that. Just like visit Sveti Nikola Museum where one can get acquainted with the marine inhabitants of the Black Sea. Among other interesting museums to visit with kids is the Nesebar Archaeological Museum displaying artifacts found during excavations in the city. … Open

Nessebar has numerous churches and cathedrals where tourists can buy interesting religious souvenirs. The most common ones are icons and crosses, jewelry rings, and other church paraphernalia. The city's main shopping street is Otets Paisiy where one can find shops of all the above kinds. Ceramics shops located here are especially popular with tourists. They sell products that cannot be found anywhere else in … Open

7. To rent a car guests of the city should provide a standard set of documents including passport, insurance and international driving license. A cost of a day rent will depend on a car brand and will be about 23USD. 8. During a city cruise tourists may meet beggars. These people are rather persistent and intrusive. Tourists are not recommended to give them any change. To get rid of street beggars one … Open

For those missing golf, it is worth mentioning such a place as Holiday Fort Golf Club where both experienced players and beginners can enjoy the game. There are also things to do for those who miss gambling more - satisfy your need for excitement and adrenaline in Hrizantema Hotel Casino. Slot machines and roulette are available for guests here. South Park is ideal for walking, admiring beautiful scenic views, and … Open

Festivals and events in Nessebar

Those visiting Nessebar at the beginning of the second summer month have a great opportunity to attend a festival called “Nessebar - Island of Arts”. The venue is the above-mentioned Ancient Theater that welcomes young performers and groups arriving not only from different regions of Bulgaria but also from other parts of the world (mainly from Eastern Europe). This event is a wonderful opportunity to discover … Open