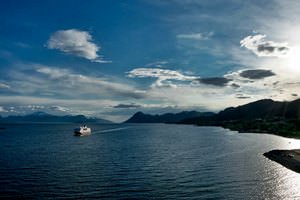 In Molde, there are a lot of historic buildings. One of the oldest constructions in the city is Molde Cathedral. The cathedral started to be built in 1661. The original building was built of wood. The first cathedral had been standing for over a hundred years. It was destroyed by a big fire. It was rebuilt only in 1997 but has not been preserved to this day too.
Authentic traditions, festivals and lifestyle of Molde inhabitants
Molde attracts travelers with its unusual and charming atmosphere. In this city, the beautiful traditions of the past are still popular. Many hereditary fishermen live here. Molde is an …

Open
It was destroyed in the period of World War II. The main cathedral in the city was restored after the war. At the site of the old building, a beautiful basilica with white walls was built. Its bell tower was 60 m high. It was constructed under the guidance of Finn Brill in accordance with the beautiful traditions of the past. The exterior of the construction is really incomparable. Much attention has been paid to the interior of the cathedral. Its rooms are decorated with fine paintings and stained glass windows.
Another interesting construction from an architectural point of view is Molde Radhus (Town Hall) built in 1966. Since its construction, it has not been almost changed. The main feature of the building is a rose garden on its roof. Once, the first rose bushes were planted in the city but specialists supported that they wouldn’t take root here due to harsh climate. Despite this, local climate conditions are suitable for roses. Now, the Town Hall is located in the territory of the biggest rose garden in the city. In the roof of the building, there is one of the most popular observation platforms in Molde. Copyright www.orangesmile.com
Your active city break in Molde. Attractions, recreation and entertainment - best places to spend your day and night here
In Molde, there are not so many entertainment centers, so tourists just walk and go sightseeing. In the surroundings of the city, there are beautiful natural sites. In the warm season, more …

Open
One of the symbols of the city is a fountain named Rosepiken. It was opened in one of the city squares where an important event took place before World War I. Here, the citizens met the German Kaiser Wilhelm with bunches of flowers. His regime was one of the most favorable for the city. In 1971, one of the local industrialists decided to immortalize the Kaiser and opened a beautiful fountain in the square. Now, there is a beautiful landscape park around it. Near the fountain, there are interesting flower arrangements. In summer, you can see a living wall of decorative plants here. 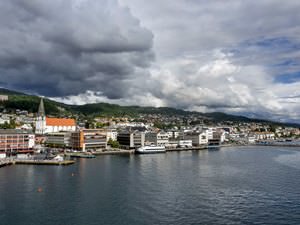 Another modern architectural monument in Molde is Storseisundet Bridge that is 326 m long. It connects the coastal area of the city with nearby islands. This bridge is distinguished by an unusual wavy shape. As the terrain here is quite thorny, the bridge has a lot of rapid drops and turns. In some sections, it may seem to drivers that they go to the end of a bluff trampoline. So, such a trip requires special preparation.
Advices to travellers: what you should know while being in Molde
1. In Molde, climatic conditions are quite mild and not typical for Norway, so it is comfortable to visit the city at any time of the year. In winter, interesting events dedicated to the New …

Open
Picturesque islands the bridge connects are very interesting too. They attract tourists with their natural beauties and magnificent historic constructions. When walking along the embankment, you can see another symbolic monument, Jazzgutten. It depicts a jazzman with a saxophone. This monument reminds the locals and tourists that Molde is home to the oldest jazz festival in Europe. 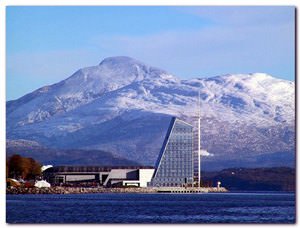 In Molde, there are several interesting museums. One of the most attractive is the Romsdal Museum. It is outdoor and decorated as an ancient village. Here, visitors can learn about indigenous people’s traditions and customs. In its territory, there are a lot of beautiful wooden constructions where you can see collections of antique exhibits. In the museum, there is also a small zoo typical farm animals dwell.
Extraordinary weekend in Molde - unusual places, services and attractions for travel gourmet
…

Open
Here, you can participate in farm life, learn to care for animals, pet and feed them. The ethnographic museum houses the collection of the indigenous people’s household items. Here, you can see fishing equipment used by local people hundreds of years ago. Also, there are collections of old historical costumes and handicrafts. During the year, interesting themed festivals are held in this outdoor museum. It is more interesting to visit the Romsdal Museum in the warm season, as it is located in a beautiful park.

This guide to cultural sights Molde is protected by the copyright law. You can re-publish this content with mandatory attribution: direct and active hyperlink to www.orangesmile.com.
Molde - guide chapters 1 2 3 4 5 6 7 8
Car rental on OrangeSmile.com

Photogallery of cultural heritage of Molde

Excursions over cultural sights of neighbours of Molde

Alesund
Fiskerimuseet or Fisheries Museum is located near the coast. It is safe to say that this is one of the most symbolic cultural venues in this Norwegian town. The museum is open in an old warehouse. It exhibits an interesting collection of items dedicated to fishing and fish processing. Fishing has always been one of the major occupations and sources of income for local people. ... Open »
Trondheim
The city symbol and the national religious landmark is Nidaros Catherdral also known as Nidaros Domkirke. Construction of this huge and beautiful building has begun in 1070 and ran for almost two centuries. The unique relic - remains of Saint Olaf – is stored here. Legendary King Olaf has established Christianity culture in Norway and became famous after his heroic deeds. The ... Open »
Lillehammer
One of the most unusual cultural centers in Lillehammer is the Norsk Kjoretoyhistorisk Museum. It houses a unique collection of old cars, among which there are 19th-century vehicles. The most valuable exhibits are a steam car released in 1901 and one of the first electric cars in the world assembled back in 1917. Visitors are allowed to get behind the wheel of some vintage ... Open »
Bergen
Not far away from the tower you will find another sight - an ancient Bergenhus fortress, the construction of which also took place in the 16th century. During the Second World War the fortress was seriously damaged – the ship that was carrying ammunition exploded right under its walls. Today the building is fully restored and never ceases to amaze curious visitors with its ... Open »
Oslo
Government House is one of the main symbols of Oslo. The building was built in 1958. It is characterized by severe and stately look; Government House has full right to be called a model of high style. Among the cultural institutions of the city visitors are recommended to visit a popular Viking Ship Museum, which is located on Bygdoy Peninsula. The museum exhibits a unique ... Open »
Larvik
The city has many interesting museums. Thus, Larvik Museum introduces visitors to the history of Larvik and traditions of its inhabitants. It houses a diverse collection of exhibits, including old furniture, works of art, traditional costumes and household items. The city has always been famous for its craft traditions, therefore a significant part of the museum's exhibits ... Open »

Culture guide to Molde. Which fascinating sights to visit once you are in Molde: temples, churches, museums, theaters and castles. Recommendations (with addresses, phone numbers and links) on the places 'must visit' in Molde. Plan your own city excursion by using this page info!