Sightseeing in Minsk - what to see. Complete travel guide 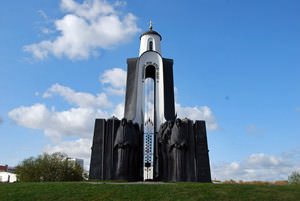 The ancient city with an interesting history, Minsk is famous by numerous cultural centers and great atmosphere that is perfect for relaxed rest. Minsk was almost completely destroyed during the Second World War; today only several buildings of the 17th century belong to the oldest architectural monuments. All other monuments have been destroyed.
Shopping in Minsk - main shopping streets, outlets and boutiques
The tourists that love shopping usually start their walk around Minsk with a visit to GUM. When it opened in 1951, it had a distinctively luxurious interior design. It was this place that …

Open
However, there are truly many remarkable places in the city. The most important religious landmark is Holy Spirit Cathedral, the main item of which is the icon of Our Lady. It was made back in 1500 and was carefully kept by monks during the difficult times of war. Castle of Mir is a no less important architectural structure. This castle was built by the order of Prince Ilyinich. During its long history the castle has been repeatedly destroyed and rebuilt. The first version of the palace has been done in Gothic style, and the modern palace features the combination of Baroque and Renaissance styles. The Obelisk of Victory is one of the most symbolic monuments of Minsk. This monument was built in 1954 in honor of soldiers who died during World War II.
Yanka Kupala Park remains the best place for walks. On the territory of this park you will also find numerous monuments and beautiful fountains. Continuing the talk about the cultural program, it is worth mentioning widest choice of museums. The National Museum of History and Culture remains the most popular for many years. Here are stored various types of exhibitions - a collection of coins, national costumes, paintings, archaeological finds and heraldry. It is also recommended to visit the Bogdanovich Museum of Literature, State Literary Museum of Yanka Kupala, National Art Museum of Belarus and Wankowicz Museum. Copyright www.orangesmile.com
Family holidays with kids in Minsk. How to entertain your child, things to show to children.
In Minsk, everyone can pick entertainment for his liking. The Minsk Zoo is exceedingly popular among travelers with children. This zoo is not very big, but has a beautiful design and an …

Open
An interesting historical monument is the architectural complex Troitskoye Suburb, which was built on the site of a destroyed monastery of the 10th century. For hundreds of years, the main city market was located here. In the 19th century, beautiful mansions and a vast park were built in its place. Now the luxurious mansions, which used to be privately owned, have been converted into museums, souvenir shops and restaurants. In one of the most beautiful buildings, there is a theater. For more than a hundred years, the architectural complex has remained unchanged. 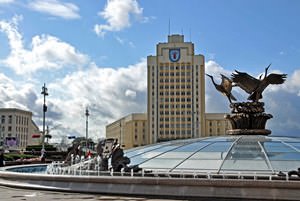 Looking at the building of the city’s town hall, it is difficult to imagine that it is a novelty. The Town Hall, which guests of Minsk can see today, was built in 2004. The very first building of the city administration in this place was built back in the 19th century. In the middle of the 19th century, the old town hall was destroyed by order of Nicholas I. The city authorities decided to restore the historical monument several decades ago.
Cuisine of Minsk for gourmet with top restaurants and cafe
It’s not easy to choose Minsk’s best restaurants, as there are a lot of them, but travellers still have a few favourites. For example, Grand Cafe, an international cuisine …

Open
A bright monument of architecture of the beginning of the 19th century is the Pishchalauski Castle. It was built for one of the wealthy landlords. The castle is built in a pseudo-Gothic style and its outlines look very much like a medieval fortress. Over the years, the building witnessed many important historical events. In the first half of the 20th century, one of the strictest prisons in Europe was located within the castle walls. 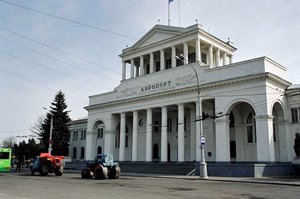 An important religious monument is the Church of Saints Simeon and Helena, which many tourists know under the unofficial name Red Catholic Church. This temple is located in the center of Minsk. It was built in the beginning of the 20th century. The main building material for the erection of the temple was red bricks, which determines its unique appearance.
Authentic traditions, festivals and lifestyle of Minsk inhabitants
Local culture is a unique mix of pagan and Slavic traditions. Although most natives are Christians, they continue revering their ancestors’ traditions and respect pagan culture. All …

Open
A wonderful place to relax in the fresh air will be the Chelyuskintsev Park. It is one of the most beautiful in the city. This park was founded almost 100 years ago. In 1974, its territory was substantially expanded. Now the park is equipped with several platforms, on which during summer, cultural events and concerts are held. In the park, there are also many children's attractions and sports grounds. An old dance floor, which is now used for dancing evenings, is preserved in the park. Walking around this park and admiring the historical buildings preserved on its territory will be interesting at any time of the year.

This guide to iconic landmarks and sights of Minsk is protected by the copyright law. You can re-publish this content with mandatory attribution: direct and active hyperlink to www.orangesmile.com.
Minsk - guide chapters 1 2 3 4 5 6 7 8 9

City tours, excursions and tickets in Minsk and surroundings

Survived castles around Minsk
♥   Castle 'Pischalauski' , 1.2 km from the center. On the map

Sights around Minsk from our guide 'Extreme places on Earth' 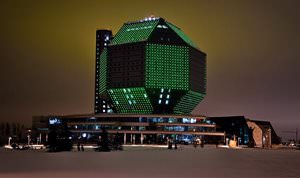 Distance from Minsk center - 6.3 km.
Next to the library building was the wonderful landscaped garden, which became the favorite resort for tourists as well as the local residents. For a relatively little money, all interested can visit the library. Another attractive 'tourist' object is the large viewing platform on the last floor of the building. The National Library of Belarus is the largest library of the CIS countries, and the building, which serves as its location, is considered one of the most beautiful modern buildings in Minsk. … Read further

The majority of cities in Belarus were founded yet in 8th – 10th centuries, so there are many places of interest, historic sights, old buildings and museums in every part of the country. Visiting them will help you get acquainted with this wonderful country and its rich heritage. … Open

Search touristic sites on the map of Minsk

Sightseeing in regions nearby Minsk

Vilnius
Vilnius University. The university complex, built in 1579, is one of the most stunning buildings in Lithuania. Vilnius University is the oldest university in Eastern Europe. It was founded by Stephen Báthory after he had become the king of the Polish-Lithuanian Principality in the XV century. During its long history of more than four centuries Vilnius University went ... Open »
Mahilyow
In the 16th century, Mogilev came to the wife of Polish King Alexander, Elena. The city is still rapidly developing. The strong military fortress has recently been built here. The wartime on these lands has never come to an end because when the residents had to defend the castle, their families hid in the shelters outside the castle. The castle itself was wooden but very few ... Open »
Vitebsk
The unification of these lands played a very significant role in the development and formation of the Belarusian ethos. It was after it that an original culture began to form and the life of the indigenous population acquired its unique characteristics. In the 16th century, architecture developed actively, which was able to embody all the national peculiarities and traditions ... Open »
Daugavpils
At the end of the 19th century, the city returned its former name, Dvinsk. However, almost thirty years later, when the Lithuanian army captured it, the town was once again renamed as Daugavpils. In the 40s, the city with a rich history returned to the territory of Latvian SSR. Local people had to face tough times during World War II when German troops occupied the city. ... Open »
Druskininkai
The resort’s infrastructure changed drastically in the period between the two world wars. This is the time when new sanatoriums were built in Druskininkai. The scientific base of the new establishments developed as well. When the eastern part of Poland was added to the USSR at the end of the 30s of the 20th century, Druskininkai became a part of the Belarus SSR. However, ... Open »
Kaunas
Besides the fact Žaliakalnio district is considered a new part of the city, the majority of buildings there were made in the beginning of the 20th century. In 1931 here was opened a funicular. It works up to our days. Make a walk on the central Laisves Street and you will see numerous wonderful fountains and visit the most popular cultural facility of the city – Museum of ... Open »

All about Minsk, Belarus - sightseeings, attractions, touristic spots, architecture, history, culture and cuisine. Prepare your trip together with OrangeSmile.com - find out the 'must see' things in Minsk, which places to visit, which excursions to take, where the breathtaking views are waiting for you. Planning your trip with this travel guide will help your to get the most out of Minsk in few days.